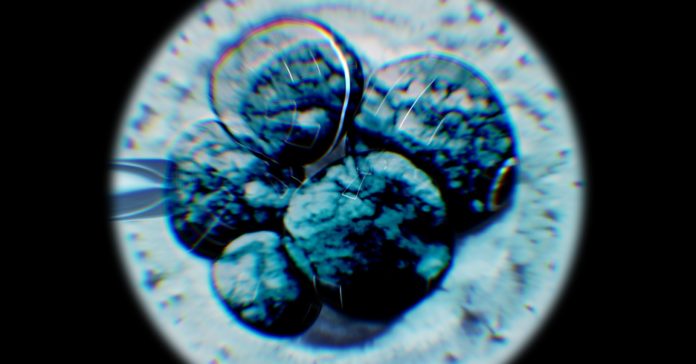 Millennials are increasingly making time in their busy schedules to put their eggs on ice. More effective flash-freezing technologies, micro-optimized ad targeting, and a growing willingness among companies to follow Silicon Valley’s lead of including fertility treatments in benefit packages have made the practice more attractive to would-be parents. At last count, more than 65,000 so-called social egg freezers in the US are doing so each year, despite the costs, physical toll, and the uncertain odds. Egg freezing doesn’t guarantee a child-bearing future; recent data from one of Europe’s largest IVF clinics indicates that while most eggs survive the thawing process, only about a third of them result in successful pregnancies.

To give patients a sense of what their chances are, fertility doctors use a system taken from the annals of 19th-century actuarial science. They’ll match up a woman’s age with the number of eggs retrieved and, based on historical averages, come up with her odds of getting pregnant. Not exactly cutting-edge stuff. Now, a Canadian startup thinks it can use artificial intelligence to crack the riddle of egg quality and better predict which ones are best suited to becoming babies.

On Tuesday, a Toronto-based startup called Future Fertility unveiled the world’s first fully automated egg-scoring algorithm. The company’s cofounders say its neural network, dubbed Violet, can predict successful fertilization with 90 percent accuracy based on a single image. Violet isn’t as good at predicting further IVF milestones, however. When assessing whether an embryo will survive at least five days, Violet is correct only 65 percent of the time. Its ability to forecast a successful implantation inside the uterine wall is less accurate still. But the company says those numbers will likely improve as Violet gets rolled out to IVF clinics, where it can learn from every patient that goes through the process.

It’s not the first time researchers and corporations have thought to use AI to improve IVF outcomes. Earlier this month, scientists at Cornell University trained an off-the-shelf Google deep-learning algorithm to grade the quality of embryos even better than human fertility technicians. Two separate Australian companies are trying to automate similar selection processes for use with IVF patients, according to The Wall Street Journal. But it’s the first time anyone has tried to use deep learning to see something informative inside the human egg, which is basically a formless sphere of water.

“To me it was always the craziest thing that we have some sort of classification for sperm, for embryos, for the inner lining of the uterus, but I can never give patients any feedback for eggs,” says Dan Nayot, medical director at Future Fertility and a reproductive endocrinologist at TRIO Fertility in Toronto. “To the human eye, eggs just look pretty similar. At this point it’s sort of a coin toss.”

The company got its start when a Canadian technologist named Rene Bharti and his wife found themselves in Nayot’s waiting room a few years ago. Bharti and his friend Alex Krivoi were working on a project for Lego at the time. They were using machine learning to identify from a photograph which piece was missing in an unfinished Lego project, so you could go on Amazon and buy a new one. Bharti was struck by how much data fertility clinics like TRIO had but how little information they could give patients on what was going on with their eggs. Bharti and his wife gave birth to a daughter named Violet in early 2018, and her namesake algorithm was born shortly thereafter.

Violet (the neural net, not the toddler) was trained on 20,000 images and de-identified electronic health records from TRIO and a handful of partner IVF clinics. From the records, Violet could learn the characteristics of eggs that fertilized versus ones that didn’t. Krivoi, the company’s chief technology officer, says they validated the egg classifier on roughly 2,000 images that were held out of the initial training set. The company has not yet published any of its results in a peer-reviewed journal.

Nayot says they’re now planning a prospective trial that will likely enroll a few hundred IVF patients. Violet will score the eggs of half the participants based on photos taken during the few hours after they’ve been harvested and make predictions about each egg’s chances of IVF success. The other half will go through the standard actuarial table calculation, and an embryologist will try to make predictions about each egg’s fate. Then they’ll follow the patients and compare fertilization, implantation, and birth rates to see if the AI serves up more success stories.

Eric Topol, a physician and the director of the Scripps Translational Science Institute who recently authored a book about AI in medicine, is optimistic that deep learning could make an impact in the field of reproductive technologies. But he’s worried that at this point the algorithms are long on promise and very short of proof. “It’s great that this is being pursued, given the problem that there are many eggs that go discarded or unused that are likely well suited for IVF,” he says. The validation, however, will be in live births of healthy babies, documented transparently in peer-reviewed papers. “Without fulfilling these requirements, I would certainly not say the tech is ready for prime time.”

Future Fertility has agreements to start testing its technology with seven IVF clinics besides TRIO, including in the US, Japan, and Spain. The company describes it as in a beta phase, with a full commercial launch expected later this year. The system it’s shipping consists of a small camera that attaches to a standard light microscope that takes pictures of each egg. A software package then uploads the images to Future Fertility’s servers for Violet to scan and produce a report.

Nayot says it will be up to individual clinics to decide whether they’d seek a subscription to incorporate egg scoring as a standard part of egg freezing and IVF or offer it as an add-on service with additional fees. Even if it does cost more, egg scoring could save patients money in the long run by letting them know earlier in the process if they should look into alternatives, like egg donation or adoption. And, unlike in that other profession that uses actuarial tables—accounting—this algorithm won’t put any humans out of a job.

GizmoCrazed - June 5, 2018 0
Consider the following physics problem. An object with a mass of 1 kg and a velocity of 1 m/s in the x-direction has a net...