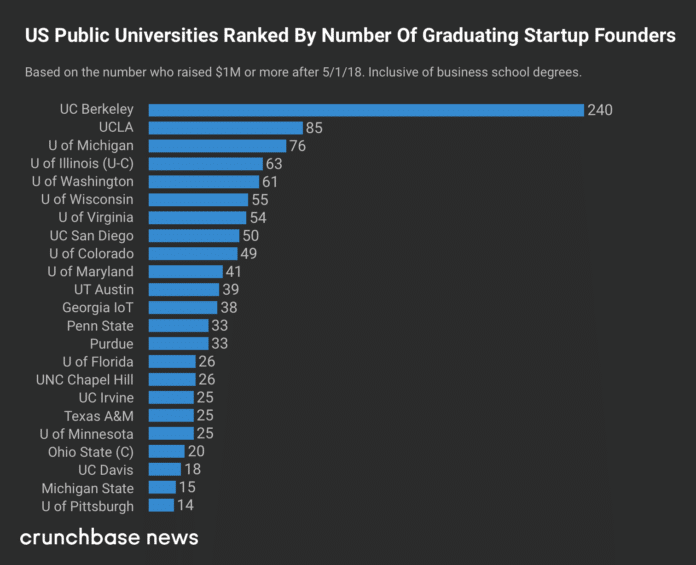 A lot of students attend public universities to lessen the financial burden of higher education. At last tally, tuition and fees at American public colleges and universities averaged around $6,800 a year, per the federal government. That’s far below the $32,600 mean price tag for private, nonprofit institutions.

Yet when it comes to public universities, the old adage “you get what you pay for” clearly does not apply. Leading public research universities in particular have a track record of turning out enviably knowledgeable and successful graduates. That includes a whole lot of funded startup founders.

And that leads us to our latest ranking. At Crunchbase News, we’ve been tracking the intersection of alumni affiliation and startup funding for the past few years. In a story published earlier this week, we looked at which U.S. universities graduated the most founders of startups that raised $1 million or more in roughly the past year.

For today’s follow-up, we’re focusing exclusively on public universities. Starting with a list of top-ranking research universities, we looked to see which have graduated the highest number of funded founders.

For the most part, we used the same criteria as the public-and-private list, focusing on startups that raised $1 million or more after May, 2018. The public list, however, does not separate out business school grads.

Looking at the list above, a few things stand out. First, our top ranker, University of California at Berkeley, is multiples above the rest of the field when it comes to graduating funded founders.

Berkeley is a school that’s generally hard to get into, prominent in STEM and located in the VC-rich San Francisco Bay Area. So seeing it top the list isn’t necessarily surprising. However, the magnitude of its lead — with nearly three times the funded founders of runner-up UCLA — does warrant attention.

Big Midwestern schools also did well, with University of Michigan and University of Illinois, Urbana-Champaign nabbing the third and fourth spots.

More broadly, the list includes schools from all U.S. regions, including the East Coast, West Coast, South, Midwest and Southwest. So no particular region has a lock on graduating funded entrepreneurs. That’s also not surprising. But it’s good to have some more numbers to back up that notion.

GizmoCrazed - December 13, 2018 0
Fintech startup Revolut is now officially a bank. While the startup initially expected to get its European banking license during the first half of...

How To Customize Title Bar & Other System Fonts in Windows...