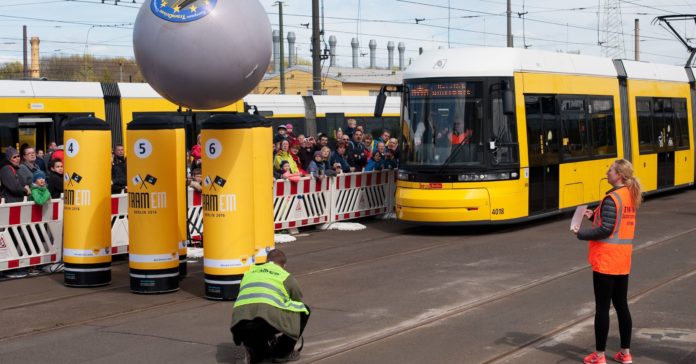 Last week Europe’s tram drivers had their annual championship. They showed off their precision braking skills. They tried to estimate their speed without the luxury of a speedometer. But the most amazing event by far is tram bowling.

Yes, tram bowling. A tram drives along its track and hits a large stationary ball. That ball then flies off to knock over some giant pins. It’s just like normal human bowling except with a tram. I’m not sure who thought of this idea, but I do know who is going to model it.

So, what is going on here? Why does the ball go flying off like that? What does the speed of the ball depend on? There are so many questions—that’s why we need a model. Let’s start with something simple. Suppose I have a tram and a ball. Both are on a horizontal surface with no friction. The ball is stationary and the tram is moving at some constant speed. Blam-o: The tram hits the ball. During this impact, the ball is compressed such that it exerts a force on the tram. But since forces come in pairs, this also means the tram pushes back on the ball with the same magnitude force (but in the opposite direction).

Of course F is the force on the objects. The B-T subscript is for “ball on tram,” and the T-B means “tram on ball.” But what does a force do to an object? A net force changes an object’s momentum, where momentum is the product of the mass and the vector velocity. I’m not sure why we (physicists) always use p for momentum, but we do.

If I know the force, I can find the change in momentum. The force between the ball and the tram can be modeled as a spring force. The most basic spring exerts a force that is proportional to the amount the spring is compressed or stretched. We call these Hooke’s Law springs, named after Robert Hooke. The proportionality constant between compression and force is called the “spring constant” and is represented with the variable k.

In this expression, I am using s for the amount of compression (instead of x), because it could be compressed in any generic direction. Now we can build a model. It goes like this:

That is the basis for a numerical calculation. Here’s what that looks like. Yes, this is an actual calculation. The code is right there—you can even change it if that makes you happy. Just click the pencil icon to see and edit the code.

Yes, this just keeps rerunning the collision over and over. Oh, if you want to change some things, there are three variables I suggest (in the code). You can change the effective spring constant and the masses of the two objects. See what happens. For my initial model, the tram has a mass of 10,000 kilograms compared to the ball at just 1 kg. This gives the the ball a final velocity of about 10 m/s (the tram was moving at 5 meters per second).

Next, as a physicist, I am legally required to create a plot of momentum vs. time for these two objects. If I use the same masses as before, the graph is boring. The change in momentum of the tram is so tiny, you can’t really see much. So, just for educational purposes (don’t do this in real life), I am going to use a ball mass of 1,000 kilograms. Here is the plot.

Notice that the tram decreases in momentum by the same amount that the momentum of the ball increases. That’s physics. Of course in real life there would be another force on the tram since it’s still driving forward. However, the collision is so short that this wouldn’t really change much.

But, like I always say, you don’t really understand something until you model it. In this case, however, I still don’t understand how someone came up with this game of tram bowling.