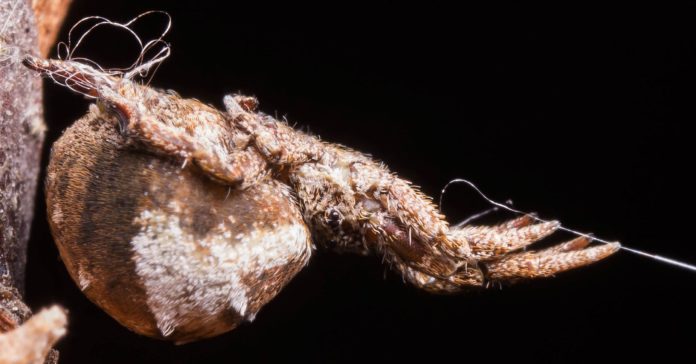 At first glance, the triangle-weaver spider, Hyptiotes cavatus, builds a web like any other spider. But once an insect hits that web, something damn near logic-defying happens. Sitting in one corner of the triangle, the spider seems not so much to crawl but to teleport an inch closer to the struggling prey, then another inch, then another, as the web—sequentially slackened—collapses on the insect.

The spider isn’t teleporting, of course, but it is pulling off something almost as improbable. With its front legs, it tugs a thread within the larger structure of the web, building up tension. With its back legs, it holds another thread that anchors it to a surface such as a branch, but it leaves lots of slack. That extra thread coils up near its spinneret, or silk-manufacturing organ.

When the spider releases the coiled anchoring line, the arachnid rockets forward with astonishing speed. University of Akron entomologist Sarah Han, lead author on a new paper describing the spider’s technique in the journal PNAS, and her colleagues clocked a max (albeit very brief) acceleration of 773 meters per second squared. That equates to a dizzying 79 g’s. If sustained that acceleration would more than wallop a human. Fighter pilots, for example, can pull about 9 g’s before passing out.

“It’s kind of like if you’re hauling yourself up on a rope,” says Han. “It just does this leg-over-leg motion, moving backwards toward the branch. That pulls the whole triangle part of the web also toward the branch, and that’s what makes it taut.”

The process is known as power amplification. It’s the core of human technologies like a bow and arrow, which stores your muscle power in the cable, or a hand-cranked catapult, which stores tension in twisted rope. Suddenly releasing all that built-up energy means you can fire arrows or boulders or giant wooden rabbits with incredible power.

Or in the spider’s case, it’s firing its web and itself. “As the web is released, all the stored tension moves the web forward very rapidly,” says Han, “and these sticky capture threads will move across the prey’s body, further capturing it.” That turns out to be essential to the spider’s hunting efficiency: The researchers found that without the release of the web, prey escaped every time, but with release, the predator could catch three quarters of all prey. Plus, it’s likely that because those extra threads are trapping the victim, the spider is able to capture larger prey than it would if it built a more traditional web.

There doesn’t even seem to be anything particularly special about the spider’s silk, other than it being a bit stiffer than other spiders’. That would make sense from a materials standpoint—if the silk were too elastic, the spider would have to pull back much farther to get the same tension to launch the web. Think how hard it would be to fire an arrow if the bow’s cable were relaxed instead of taut.

The question you’re probably asking yourself by now: How does a spider withstand 79 g’s without exploding? Unfortunately, I don’t have an answer for you, because neither does Han. But she says the team may look into that in the future. It’s worth noting that as arthropods, spiders wear their skeletons on the outside, which makes them inherently tougher than us mushy humans with our internal skeletons. Still, the spider has to worry about its belly full of guts sloshing around as it accelerates.

Also still a mystery is how the spider is able to hold itself in that tense position for hours, waiting for prey to hit the web. “We plan to do some CT scanning of the spider to look for something like a catch mechanism or some other explanation as to how it can hold it,” Han says.

This is how other power-amplifying critters go about it. A mantis shrimp, for instance, punches with powerful hammer-like appendages by cocking the limbs back with muscles and storing energy in a divot that acts like a spring, then letting the hammer loose with a latch. And the trap jaw ant cocks back its giant mandibles until a latch snaps into place, then releases its jaw with such force that it can actually aim at the ground and blast itself away from predators.

What makes the Hyptiotes cavatus spider so special is that it hasn’t weaponized a part of its own body to amplify power, but has modified a tool—the web. Think of a more everyday spider that just sits there in a web waiting for prey to come along like one of those Roman gladiators with a trident and a net, while Hyptiotes cavatus is wielding a net gun. “Usually in animals,” says Han, “all the power amplification will happen within a body structure, and we don’t really see animals except for humans doing power amplification with tools.”

As the web collapses, more fibers lock around the prey.

It’s a reminder that one, we humans aren’t as inventive as we like to give ourselves credit for—spiders were power-amplifying their weapons long before we invented the catapult. And two, that spiders have weaponized silk in a galaxy of creative ways ever since the earliest spider lineages just put silk on the ground around their burrows and sensed the vibrations of passing prey.

“Over evolutionary time, spiders have come up with more and more elaborate ways to use that silk,” says arachnologist Catherine Scott of the University of Toronto, who wasn’t involved in this new work. The bolas spider, for instance, swings a single strand with glue at the tip to snag insects midair. Net-casting spiders hold their webs in their front legs to grab prey.

Why, though, would Hyptiotes cavatus evolve such elaborate power amplification? It’s speculation still, but Scott notes that this spider’s family lacks venom, and its silk lacks glue. “Their silk is sticky because of its physical structure,” says Scott. “It’s kind of like velcro—it’s got tons and tons of these tiny loops, so that when a fly runs into it, it sticks.” Perhaps power amplification evolved as a strategy to get as many lines collapsing on the prey as possible to immobilize it, since the spider can’t immobilize the victim by injecting venom.

Whatever the reason, Hyptiotes cavatus don’t need no reason to hurl itself at its victims at ludicrous speeds. You do you, teleporting spider.