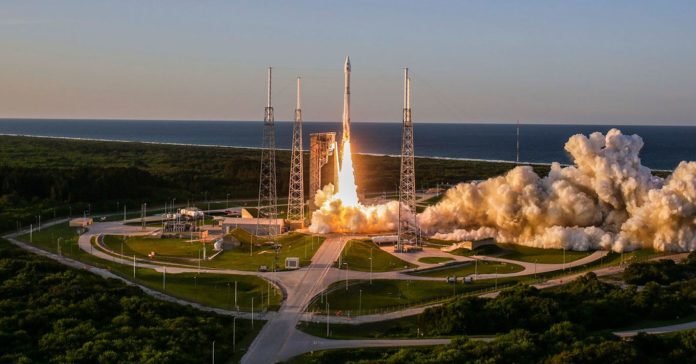 If you go to the website for the Planetary Defense Conference, a large red box contains a warning: “This webpage does not describe a real potential asteroid impact,” it reads. “The information on this page is fictional.”

The page is for the people who look up at the night sky and think—as part of their jobs—not of pretty, twinkling stars but of hurtling objects that might crash down and pulverize us all. These asteroid-impact planners need fake threats to work through how exactly we’d survive a real encounter with a space rock headed straight for Earth. This year, the fictional killer asteroid that got their blood pumping was fake-discovered on March 26, 2019.

Somewhere between 100 and 300 meters across, this rock could crash into Earth at several points in the future, most likely on April 29, 2027. The “[risk] corridor wraps more than halfway around the globe, spanning from the Hawaii on the western end, across the US and Atlantic Ocean, and all the way to central and southern Africa on the eastern end.” Translation: Watch out, a lot of people.

“The rest of the scenario will be played out at the conference,” reads the webpage.

At the meeting, which started April 29, scientists, policymakers, and emergency response experts have been enacting a kind of Dungeons and Dragons–esque game scenario, playing out how they’d respond if this same situation were nonfictional. In what conditions should you deflect, and how? What happens if deflection fails? How can lives be saved in that case? Doing the homework ahead of time may mean the difference between Armageddon, the movie in which miners move an asteroid’s path away from earth, and a biblical Armageddon, as in the end of the world.

The threat of asteroids used to be a lot higher on this planet than it is in the age of either movies or the Bible. When Earth first coalesced, life couldn’t crop up because comets and asteroids crashed into the surface so often that the planet stayed too hot for the liking of water and organic matter. Later, though, when things chilled out, those same kinds of collisions may have delivered the water and carbon-based molecules that have since scaffolded and nurtured life.

On the other hand, a space rock also killed off the dinosaurs. On the other other hand, that event eventually made room for you and me. But consider that in the future, another such a crash might kill us off and make room for something or someone new.

Asteroids are, in other words, death, destroyers of worlds, but also life, bringers of biological novelty. Above all, apparently, they represent ultimate cosmic duality.

Scientists didn’t always think about asteroids and comets that way—or, really, much at all. Earth has erased most evidence of the bullying in its past. Plate tectonics and erosion have swept most dings, dents, and saucer-shaped depressions neatly away, leaving only the artifacts of bigger collisions—like Meteor Crater in Arizona. “If that had happened in modern times, it would have taken out the entire city of Flagstaff,” says Cathy Plesko, a research scientist at Los Alamos National Laboratory. “Nobody’s getting out of that one alive.”

Around the time that researchers realized Meteor Crater wasn’t just a weird mesa, in the early 20th century, a space rock hundreds of feet wide exploded over the Siberian taiga. The impact blast was so bright “you could read by the afterglow of the trail,” says Plesko—in London. It knocked the forest flat for miles. It’s now called the Tunguska Event, the vagueness of the name conveying its seriousness.

Then, of course, came World War II, a time when humans exploded many objects, in ways critically nuclear and not. It was the first time humans had seen, on a large scale, the damage that such explosions—whether from bombs or dive-bombing asteroids—could do.

Finally came the Space Age. When astronauts stepped onto the moon, they saw exactly how pockmarked it was, containing everything from giant depressions to tiny holes. “It was craters all the way down,” says Plesko. From dating the lunar samples that astronauts brought back, scientists could calculate the rate at which small bodies hit larger ones. Like the Moon. Like Earth. It wasn’t not often.

In the ’90s, comet Shoemaker-Levy 9 hammered the point home, when it hit Jupiter. Comet Siding Spring almost hit Mars in 2014. The message from the universe was clear: “We’re living in a bit of a shooting gallery,” says Plesko.

To understand how to get out of that shooting gallery alive (long-term), humans have to understand what the so-called impactors are like. It’s hard to stop such a speeding bullet if you don’t know where it is, how fast it’s going, how it’s shaped, or what it’s made of, so solid science sits at the core of planetary defense—the term scientists use to mean “how to not get hit by space objects.” Plesko studies how to mitigate the risk of specific space rocks. In general, options include setting off nukes near the rock, shooting a massive object at it, and spray-painting one side of it so that sunlight interacts with it differently. These measures, the thinking goes, could kick it into an orbit different enough that it would sail safely by Earth.

Recently, Plesko has been looking at Bennu, a 500-meter-wide asteroid that orbits the Sun every 1.2 years and slides close to Earth every six. In the late 2100s, there’s a chance it could come so close as to collide. Conveniently, scientists have sent a spacecraft—NASA’s OSIRIS-REx—to it. OSIRIS-REx has been swooping around Bennu since late 2018, and in 2020, it will swoop down, collect a sample, and return that sample to Earth in 2023. Plesko simulated how she might push Bennu off course (using nuclear and non-nuclear options), refined those models once OSIRIS-REx sent back real-world data, and designed a hypothetical spacecraft that could do the job. But, of course, all of that depends on what Bennu is actually like.

When OSIRIS-REx arrived at Bennu, scientists learned they’d been generally right about a number of things, including its shape, size, and some other characteristics. But the object stored surprises, too. It’s more active than they’d anticipated, “spitting out little satellites,” as scientist Ellen Howell, of the University of Arizona’s Lunar and Planetary Laboratory, says. That changes some future calculations. Infrared measurements taken from far away suggested Bennu had more small particles than it does: The asteroid is actually covered in bigger boulders.

The team originally thought they’d have their pick of wide, dusty spots to pick up a sample, but they’ll have to scoop from a smaller region, requiring more precision. “It’s kind of like, you land on a lava flow on Hawaii and try to pick up sand, and there just isn’t any,” says Howell, who also works on the mission. The good news, she continues, is that Bennu seems to have mixed its materials pretty homogeneously. “No matter where we end up being able to take a sample, we’ll get material that’s typical,” she says.

Those surprises show you can’t learn about an asteroid entirely via correspondence course. But you also can’t sidle up to every space rock individually. And each is, in some way, a snowflake. “Asteroids are individual things,” says Howell. “You can’t go look at one and say, ‘Oh, the rest are like that.’”

To keep remote watch on the many space objects humans can’t trek to, scientists use tools like planetary radar, which reveals the rocks’ shape, distance from Earth, and velocity. Ed Rivera-Valentin, of the Lunar and Planetary Science Institute, has recently been studying radar observations of close-pass asteroid 2003 SD220. He calls it the batata—or sweet potato—because it looks like one. “If we’re going to try to stop a sphere, it’s a different mechanism from if we’re going to try to stop a batata,” he says. Similarly, trying to stop a loosely held batch of boulders is different from trying to stop a more solid object.

Scientist Patrick Taylor, who works at the same institute, agrees. “It is the most powerful and most sensitive planetary radar there is,” he says. The observatory, though, faces regular existential threats of its own—political, financial, meteorological—in its attempts to mitigate the existential threats to its makers.

The conference began with the fictional information on the webpage. But as the hours tick by, organizers reveal more data on the asteroid, and refine its trajectory. As of Tuesday evening, the asteroid had a 10 percent chance of hitting Earth, possibly “producing serious devastation over a large region.”

They’ll also announce which city it’s supposed to smash (the European Space Agency is live-tweeting the updates, a 21st-century spin on the War of the Worlds broadcast). “It’s conference etiquette that the object is supposed to hit on the city where you’re hosting,” Plesko says. “That means the local disaster-response people, who normally don’t travel to asteroid conferences, can show up without having to get a hotel.”

The game involves not just local logistics but also politics and stresses of all sorts. If someone is role-playing the president of the UN, and they have to make the go-no-go call on sending a nuclear warhead to an asteroid that only has a 20 percent chance of hitting us, do they do it? “Or do you say, ‘No, it’s an 80 percent chance it’s not going to hit. We’re not going to rock that boat’?” wonders Plesko.

But whatever it is that our fake and future overlords are going to nuke, or not, they first have to know it’s there at all. For that discovery, scientists rely on projects like Pan-STARRS, the Catalina Sky Survey, ATLAS, NEOWISE, and DEEP-South for that. It is, perhaps, the most important part of planetary protection.

“’Find them early’ has really become a mantra,” says Plesko. The timing, here, is relative: Discovering an asteroid 50 years ahead of potential impact is considered early. “Ten years is ‘OK, we drop everything and do this now.’”

GizmoCrazed - April 4, 2011 0
Almost a month after its release, Apple has aired first TV advertisement for the new iPad 2. Check out the advertisement below.           Introducing iPad 2....

iPhone 5 Media Event To Be Held On Apple Campus In...