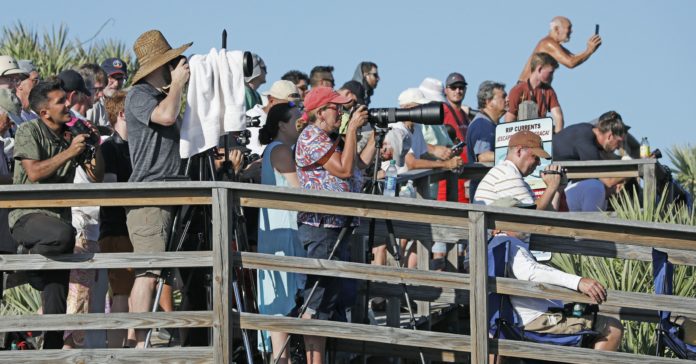 A few hours before dawn in January 2015, a SpaceX Falcon 9 rocket departed from a launch pad at the Cape Canaveral Air Force Station on a mission to the International Space Station. It was the company’s fifth cargo resupply mission and the first time it attempted to land a booster on an autonomous drone ship. Rocket launches always inspire awe, but for Ryan Chylinski, this one was life changing.

A part-time photographer, Chylinski had signed up for NASA Social, a program that grants media credentials to unaffiliated writers and photographers. It was his first time photographing a launch up close. “It was addictive,” Chylinski says. “I just kept thinking about it.” He returned to his IT job and spent the next two years dreaming about rockets.

In late 2017 Chylinski gave in to his obsession. He sold his belongings, left his job, and hit the road in a Capri truck camper with his dog, Tuck, to photograph rockets full-time. Most people in their mid-thirties would balk at that kind of career move, and Chylinski, now 35, admits he had reservations too. But he told himself it would just be for six months. If it didn’t work out, he’d return to corporate IT.

He’s been on the road chasing rockets ever since.

Chylinski is part of a small group of (semi-)professional rocket chasers who are obsessively documenting the new space race and paying particular attention to the happenings at SpaceX. They’ll camp out for days in a remote part of Texas just to get a glimpse of the company’s experimental rocket engine. They lurk in Florida harbors as drone ship paparazzi. They attend every single launch, no matter how unglamorous the payload or inhospitable the hour. By showing up, these rocket chasers are uncovering news about the secretive happenings at SpaceX.

This past March, Chylinski was hunkered down in a cramped bungalow in Cocoa Beach, Florida, a small tourist town just down the road from NASA’s Kennedy Space Center. He had converted the condo, which he was renting for the week, into a personal command center in advance of the first commercial launch of the massive SpaceX Falcon Heavy rocket. Tens of thousands of dollars’ worth of cameras and equipment were strewn about the floor, some owned by Chylinski and some on loan.

He had picked up a gig to film the launch, which allowed him to splurge on the condo. Normally Chylinski operates out of his camper, which he named the Voyager 3. He parks it around Orlando, where he might spend weeks on end, depending on the launch schedule at Kennedy Space Center. Chylinski says he supports himself on a modest income, mostly from online photography gigs, so he often sets up shop in cafés. But most of Chylinski’s launch photography is done for free. He uses the photos in personal projects or gives them to magazines in exchange for the media affiliation needed to access NASA’s facilities.

For most launches, Chylinski sets up three or four mirrorless cameras around the pad and uses sound triggers to take pictures when the rocket engines ignite. But for the Falcon Heavy launch, Chylinski significantly beefed up his rig. He also set up three high-speed cameras near the pad, which would capture the engine’s explosive power at nearly 2,000 frames per second. One of the camera models hadn’t even been released to the public yet, but Chylinski had established a relationship with its producer, Kron Technologies, which sent him one to demo.

These sorts of cameras weren’t designed to accommodate the unique challenges of a rocket launch, so Chylinski had to get creative with his setup. The biggest problem, he explains, is providing sufficient power to the cameras. A consumer DSLR camera can last for days in sleep mode, but the high-speed cameras will burn through their batteries in a matter of hours. Typically cameras are set up around the rocket at least 12 hours prior to launch—but the gear may need to stay out for much longer than that. Launches are frequently delayed for days, and there’s no guarantee that camera operators will be allowed to return to the launchpad to swap out their batteries.

So Chylinski relies on homebrew solutions. Because he couldn’t get a 360-degree camera to connect to a traditional trigger, he made his own “robotic finger,” using an actuator to remotely set it off. He also repurposed a pair of 100-watt solar panels he used for his camper to supply nearly unlimited energy to his cameras. For the Falcon Heavy launch he connected his high-speed cameras to giant external batteries, leaving them largely exposed to the elements. If it rained, his cameras could get fried—but he didn’t have time to make a proper case, so he relied on garbage bags.

After the launch, Chylinski rode the NASA bus meant to shuttle photographers back to the launchpad to pick up his cameras. Although all of his Sony mirrorless cameras triggered as expected, when he popped the memory cards from the high-speed cameras into his laptop, he found them all blank. The cameras hadn’t been triggered. Chylinski took the failure in stride—it wasn’t the first time his equipment had failed. The trick, Chylinski says, is to quickly figure out what went wrong and start planning for the next launch. He spent the days after the launch troubleshooting the cameras, eventually placing blame on a heating issue with the external batteries, which caused the cameras to power off hours before the rocket departed to space.

The American space program has always been an object of fascination for the media. But following the end of the shuttle program, in 2011, the number of reporters turning up for launches declined, says Chris Gebhardt, the assistant managing editor for NASAspaceflight.com, a media outlet focusing on the engineering aspects of spaceflight. Although SpaceX’s flair for the dramatic has brought some of that early energy back to Kennedy Space Center, the traditional media presence remains scant. Between shrinking newsroom budgets and the availability of launch livestreams, the Space Coast no longer has the same pull.

But watching at a distance on official company feeds, as many reporters now do, means missing clues to what is happening at SpaceX behind the scenes. For many rocket chasers, those minutiae are what compels their work. Gavin Cornwell, for instance, created the SpaceXFleet project to monitor the movement of the company’s drone ships and other seafaring vessels. To do this, he relies on tracking services like MarineTraffic and listens in on maritime radio frequencies. This data helps Cornwall determine when recovered boosters will arrive back in port, which in turn allows photographers to document rarely seen phenomena, like the stowing of a Falcon 9’s landing legs.

But the life of a rocket chaser can be hard. Some of these space fanatics support themselves through contracts with specialist publications like Teslarati and NASASpaceFlight. Others, like Cornwell, solicit donations on Patreon. But many work other jobs to support their rocket obsession. Juggling launches and a day job can be tricky, says Jamie Groh, an elementary school teacher in southern Florida. For one thing, launches frequently take place in the dead of night. Groh, who travels nearly two hours to reach Kennedy Space Center, says that between inclement weather and technical problems, the delays on a single launch can eat up much of her time off for the year.

The unpredictability of launches can also be hard on relationships, Gebhardt says. In this respect, Chylinski has it easy. He met his partner, MaryLiz Bender, at a rocket launch a little over a year ago. Bender, a web developer and associate producer of Planetary Radio, was also on a perpetual road trip as a space evangelist. When they met, it seemed like fate. “I just got right into his camper so we could go on this journey together, and we immediately fell in love,” Bender says.

Chylinski and Bender have been on the road together for the past year, their schedule dictated almost entirely by rocket launches and celestial events. This has given them plenty of time to discuss why they feel compelled to dedicate their lives to documenting spaceflight. Pondering this question led them to create Cosmic Perspective, a multimedia project highlighting the role space exploration plays in fostering empathy and compassion on Earth.

“There’s certain things out there, like witnessing a rocket launch, that change you,” Chylinski says. “It elevates your perspective a bit, makes you focus less on the short term, and might change what you find meaningful. That’s a powerful thing.”

Cosmic ambitions aside, Chylinski’s life involves bearing witness to controlled explosions equivalent to tens of thousands of pounds of dynamite. As far as job perks go, there’s nothing else quite like it.

Updated 5-10-2019, 4:00 pm EDT. The issue with Chylinski’s cameras involved a heating issue with the external batteries, not the cameras as previously stated.