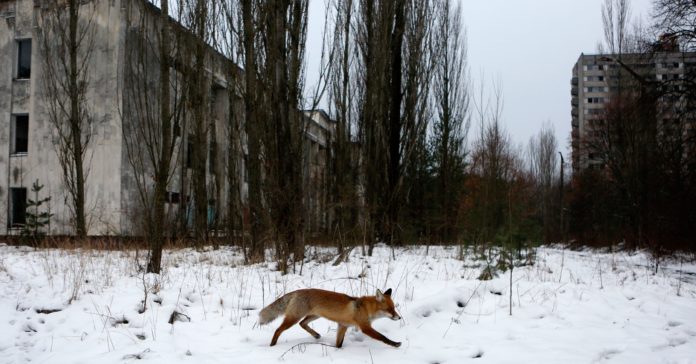 Until the 19th century, the Pripyat River basin on the border between Ukraine and Belarus was wetland and forest. As usual, humans kind of ruined it. They burned down forest for pasture land, or cut down trees to sell as timber—or for fuel to make glass and vodka. By the middle of the 20th century, most of that industry was gone, and human-driven reforestation efforts had remade the Pripyat region anew. And then, on April 26, 1986, a nuclear power plant called Chernobyl, on the Pripyat River about 70 miles north of Kiev, blew up and caught fire, spewing radiation across the northern hemisphere.

So that was a big change.

The Soviets ended up evacuating 300,000 people from nearly 2,000 square miles around the plant; the bulk of that area is now called the Chernobyl Exclusion Zone, and the old nuclear power plant is now encased in a giant concrete “sarcophagus.” But what happened to the Exclusion Zone after all those people left is the subject of disagreement in the scientific community. For decades, research in the area said that plant and animal life had been denuded, and the life that remained was mutated, sick. Newer research says otherwise—that plants have regrown and animal life is even more diverse than before the accident. The Exclusion Zone hasn’t been rewilded so much as de-humaned, more unmanned in folly than anything Lady Macbeth ever worried about. It’s a living experiment in what the world will be like after humans are gone, having left utter devastation in our wake.

It’d be easy to assume that exposing 3 billion humans to clouds of radioactive strontium, iodine, cesium, and plutonium would be a Thanos-snappingly bad thing. Some 134 emergency responders around the plant got acute radiation sickness, but 530,000 recovery workers got high enough doses to be worrisome. Studies are ongoing as to what that did to their bodies.

One effect seems uncontroversial: The more radioactive iodine you get exposed to, the more likely you are to have thyroid cancer and other thyroid problems later in life. Clean-up crew members today have disproportionately more instances of leukemia and other cancers, as well as cataracts. Luckily, radioactive I-131 doesn’t stick around. “It has such a short half life that it disappeared quickly—days and weeks after the accident,” says Jim Beasley, an ecologist at the University of Georgia who studies life in the Exclusion Zone. “The animals in Chernobyl today aren’t exposed to that.”

(The effects of radiation can get weirder. Earlier this decade, a small cluster of elderly New Yorkers were diagnosed with an ultra-rare cancer of the eye and optic nerve—vitreoretinal lymphoma. Ten of them turned out to have lived near Chernobyl or along the fallout path after the accident.)

Yes, yes, you are saying, but what about the Exclusion Zone? A mostly conifer forest west of the plant, where radiation levels were the highest, turned red and then died; it’s still called the “Red Forest.” But elsewhere? Early studies of birds and invertebrates like insects showed population declines, and later work showed the same for large mammals. “If you go to the most contaminated areas, like some sites in the Red Forest, on a spring day you can barely hear a single bird singing,” says Anders Møller, an ecologist at the University of Paris-Sud who has been studying Chernobyl since 1991. “I’ll bet you that if we went together to the Exclusion Zone I would be able to tell you the radiation level from the vocal activity of the birds.”

With his frequent collaborator Timothy Mousseau, Møller has long warned of the negative effects of radiation on the ecosystem. That team found, for example, mutation rates two to 10 times greater in barn swallows in the Exclusion Zone than in Ukraine and Italy—and subsequently genetic damage in a bunch of other plant and animal species. Signs of radiation damage, like albino patches on birds, are more common near Chernobyl, they say—as are abnormalities in sperm in birds and rodents. (Apparently the longer an animal’s sperm is, typically, the more subject it is to radiation damage. So … watch out, I guess.)

Perhaps most disconcertingly, Møller and Mousseau attempted to inventory the total populations of invertebrates in and around the Exclusion Zone, and found that their populations were smaller inside. The same, they say, goes for birds and mammals, though the changes weren’t consistent for every species. “We see negative impacts of ionizing radiation on free-living organisms. This applies to mammals, insects, spiders, butterflies, you name it,” Møller says. “And a second issue is, are these populations of large mammals composed of healthy individuals? Or individuals that are sick or malformed in other ways negatively impacted by radiation? That’s not investigated, and that’s the big question mark that hangs over the Exclusion Zone.”

Other researchers using different methods, though, have found quite the opposite. In the 1990s, a preliminary study of rodents showed that radiation had no effect on population. Twenty years later, a team of international researchers counting actual animals from helicopters found no measurable difference in the populations of elk, deer, and wild boar—and a sevenfold increase in wolf population—compared to similar, uncontaminated nature preserves. And all those populations had gone up since the first decade after the accident.

Why the difference? Possibly it’s that the animals in question reproduce faster than the radiation can kill them. “If ten percent of the population was impacted by something—and I’m not saying they are, but if they were—in most situations, that wouldn’t be enough to cause a decline,” says Beasley, an author of that 2015 study. “A very low level of mortality wouldn’t be enough to manifest in a population-level response.”

Or maybe the animals die before something like a mutation or a cancer can kill them. “Most animals die within their first months of life, and those that make it to adulthood, most don’t live more than several years,” Beasley says. “Cancer is often a long-developing sort of thing.” That doesn’t take into account the quality of life or health of an individual in those populations, though—as Møller says. The animals might not be dying of radiation toxicity, but they might have cataracts, or tumors. Their lives might not be shorter, but they might suck.

Methodologies have also changed. Beasley’s group now uses “scent stations” baited with fatty acids that animals like to sniff at. When they do, their presence triggers a camera, giving his team photographic evidence of at least a population’s overall range. They found wolves, raccoon dogs, wild boar, and foxes in population numbers as high as you’d expect in a region with no people trying to kill these things. They’ve also baited stations with dead fish alongside the rivers and canals in the Exclusion Zone, looking to find things like otters and mink. “One of the things I like about cameras is, images don’t lie,” Beasley says.

Since the accident, brown bears have colonized—or perhaps recolonized—the Exclusion Zone. In the late 1990s, European researchers introduced the nearly extinct Przewalski’s horse. Bison are thriving there, too. The absence of humans seems to have allowed these populations to grow freely.

The question is one of balance, or competing lifelines—no human pressure means a diverse ecosystem thrives, but radiation could tamp down that ecosystem’s ebullience. One of the methodological problems, though, is that no one’s really sure exactly how much radiation is there. Some people think that the radionuclides left on the ground are trapped in the soil; others think that animals traipsing through the forests could carry those particles with them and transport them to new locations. Even ascertaining the radiation level is a problem. Researchers from the University of Bristol have tried using quadcopter drones to map them; Beasley’s team is deploying GPS collars for animals with built-in dosimeters to try to answer, finally, the actual doses that critters pick up.

Those differences have knock-on effects that get to the heart of why this place is so hard to study. In the Red Forest, for example, the conifers that died were replaced by deciduous trees that could tolerate radiation better, but their leaf litter is less acidic, changing the microorganisms that live in it. “You’ve changed the ecosystem,” says Beasley. “It’s not just radiation. There are confounding factors.”

This all matters because the Exclusion Zone is all but unique. Just a few other places on Earth used to have humans, but now no longer do. They become models for a different kind of world, even if—or maybe especially because—two of those places, Chernobyl and Fukushima, are also radioactive. That’s important too. If you believe that nuclear power will be one of the key ways to produce energy without exacerbating Earth’s ongoing climate crisis, it’s important to know just how bad an accident at one of those nuclear power plants could get. Nuclear is a green, or at least greenish, source of power—it requires cold water (which it then heats up) and creates a certain amount of waste, but that might be tolerable if you’re also willing to put up with the occasional risk of a Chernobyl or a Fukushima until someone re-engineers these systems to be safer.