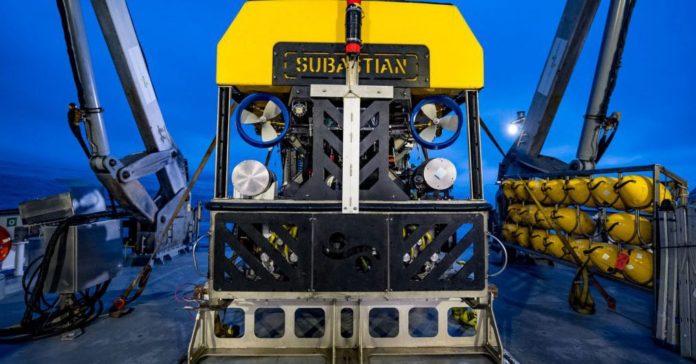 Larry Mayer is headed out this week on a ship to explore the Channel Islands off the Southern California coast. Well, he’s actually exploring seafloor formations near the islands, looking for evidence that ancient peoples might have camped out in the caves as they migrated south some 15,000 years ago, a time when the sea level was 600 feet lower than today.

To do that, Mayer and a team led by famed Titantic explorer Robert Ballard will be using a new type of technology to provide three-dimensional imagery of the caves, a kind of acoustic camera. The device uses existing multibeam sonar technology—which helped oceanographers scan the seafloor for the past 30 years—with improved resolution, computer processing speeds, and visualization software in one off-the-shelf package.

“This device can now give you a picture-like view made with sound,” says Mayer, director of the Center for Coastal and Ocean Mapping at the University of New Hampshire. “The idea is to look for places that look like a beach and a cliff but are underwater. If there are sea caves there, that’s where these people would inhabit.”

The researchers have made several previous trips to these formations, but on this trip they will examine them in greater detail with the new acoustic camera mounted on a new drone surface ship. Once they find the caves, they will send down a remote-operated vehicle called Hercules that has a high-definition video camera and robotic arms to grab samples.

The mission is just one of many recently in which ocean scientists have deployed new seafloor mapping technology and advanced autonomous vehicles to uncover startling new information about the ocean bottom. There are discoveries like the underwater sea caves, deepwater coral formations off the East Coast, and new species of marine life clustered around hydrothermal vents spewing out methane and other chemicals from the Earth’s crust. The new mapping techniques are also revealing hazards like seafloor faults, volcanoes, or unstable underwater slopes that could generate deadly tsunamis near coastal cities.

That’s what H. Gary Green and colleagues from the Canadian Geologic Service found during recent mapping of the Salish Sea, an inland waterway between the US mainland and Vancouver Island, British Columbia. They detected two active fault zones—one of them newly discovered—that could trigger rockfalls and slumps of sediment that might lead to tsunamis that could be directed toward the San Juan Islands and Bellingham, Washington.

“You don’t want to scare the public, but it’s something that should be incorporated into any analysis for hazards,” says Greene, a marine geologist at the Moss Marine Laboratories in Moss Landing, California. Greene and colleagues explored the Salish Sea with multibeam sonar sensors attached to the bottom of the research ship and seismic sensors on a small torpedo-like instrument towed 100 feet off the seafloor. Their findings were reported in April at the annual meeting of the Seismological Society of America.

Though the surface of Mars is some 34 million miles away, scientists know more about that planet’s surface than the bottom of Earth’s own oceans. Many marine scientists hope that might change in the next decade, mainly by using more robots and fewer human-staffed ships. “What you have to do is take the ship out of the equation,” says Carl Kaiser, program manager at the Woods Hole Oceanographic Institution. Running a large research vessel costs from $25,000 to $60,000 per day, and research cruises can last up to six weeks for mid-ocean expeditions.

Kaiser and members of his team are developing a shore-launched autonomous vehicle that could survey deeper waters of the US exclusive economic zone, a region that stretches 200 miles from the shoreline, at a lower cost and greater resolution than ship-based surveys. Better mapping means more information about all kinds of strange environments, such as the methane seeps that attract sea life to deep plumes of minerals. “In 2013, there was a paper that found there was one naturally occurring methane seep on the US East Coast,” Kaiser says. “Today the number is north of 800, just because we have learned how to look for them and map them.”

A commercial firm is taking autonomous ocean-mapping ships to another level. Louisiana-based L3 Technologies is designing a 100-foot, single-hulled, crewless ship, the C-Worker 30, that can cruise the ocean for two months at a time, at a speed of about seven knots. Powered by diesel engines, the C-Worker 30 will also be able to launch two helper surface ships to expand the size and resolution of the underwater map. The firm is pitching its project to the Pentagon and NOAA for ocean surveys at half the cost of a crewed ship, says Thomas Chance, vice president and general manager at L3 Technologies.

By 2030, scientists hope to have a much more accurate seafloor map of the world’s oceans, says Eric King, operations manager for the R/V Falkor, a ship operated by the Schmidt Ocean Institute, a private, nonprofit foundation. “We still have ships going over waters that were surveyed by Captain Cook with a hand lead line,” says King. In Cook’s day, back in the 1770s, surveyors would toss a long rope overboard with a lead weight on the end to mark the depth of the seafloor.

With new acoustic maps, shipping companies will also be able to avoid trouble spots, while researchers will know more about the habitats of endangered fish stocks as well as valuable minerals that lie on the seafloor.

Yet even with robotic vehicles puttering through the oceans, humans will still need to go to sea to interpret the data their instruments are collecting. King leaves in August for a four-week cruise to explore a range of seven underwater seamounts between Hawaii and the Aleutians along with 44 other scientists and crew. Imagine sending that many people to Mars.