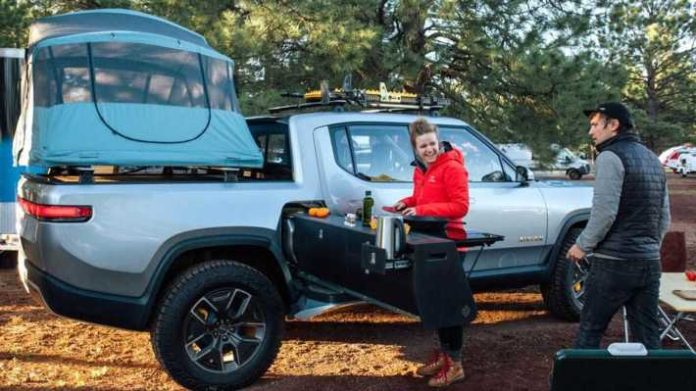 Sometimes you need scrambled eggs. And with that thought, today at the Overland Expo in Flagstaff, AZ, Rivian announced a major accessory for its electric pickup: A camp kitchen. The unit slides out from the Rivian R1T’s so-called gear tunnel that lives between the bed and cab. The kitchen includes storage and a stove that’s powered by the R1T’s 180kWh battery pack.

This kitchen unit is the first significant concept Rivian has unveiled for the pickup’s unusual gear tunnel. This space provides another locked storage compartment for the pickup — but why have it all, many asked when it was revealed? And now, with this kitchen unit, Rivian is responding to the questions. It seems Rivian wants to make its vehicles the center of an ecosystem of add-ons. The company already revealed racks, vehicle-mounted tents and even a flashlight that hides in the side of the driver’s door. Expect more camping and outdoor gear as Rivian cements its brand image around adventurers.

Rivian is positioning its products for a particular lifestyle. Think Patagonia-wearing, Range Rover-driving, outdoorsy types or at least those who aspire to have that image. It’s a smart play, and so far, Rivian has stayed true to this image. All of its advertisements, social media posts, and appearances make it clear that Rivian is carefully aligning its brand image.

Trucks and SUVs are generally marketed to workman and families. TV commercials feature dusty men hauling bails of hay and women unloading groceries and closing the rear tailgate with her foot. But not Rivian.

So far Rivian has shown its products in the backwoods, running trails and sitting next to campfires. The people in the commercials are on an adventure, wearing coats by The North Face and sleeping in REI tents. With the kitchen from today’s announcements, they can pull a kitchen out of their pickup and make some coffee.

Rivian tells TechCrunch this is just a concept, but the company intends to bring this unit to production. There are likely to be other units for the gear tunnel. I, for one, would love to have a slide-out dog washing and drying station because there’s nothing worse than putting a muddy dog in a truck.