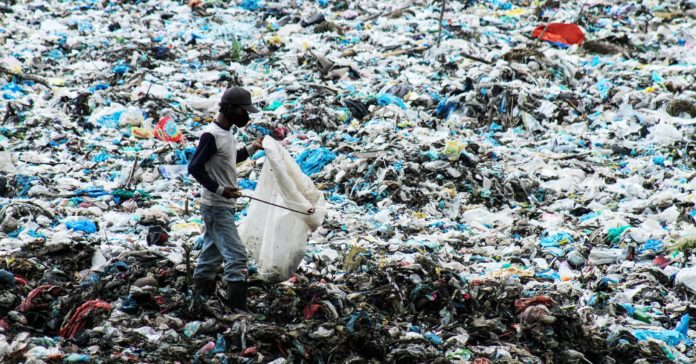 This planet has a problem with plastic. Not just the big masses of it accumulating in the Pacific, but with the tiny bits that are blowing into pristine mountaintop habitats. The flecks showing up in a range of sea creatures. The specks materializing even in human feces.

Now scientists have exposed a potential new consequence of the plastic menace: The toxins the material leaches into seawater inhibit the growth and photosynthetic efficiency of the bacteria Prochlorococcus, which is responsible for producing an estimated 20 percent of the oxygen we breathe. That means Prochlorococcus is also responsible for 20 percent of carbon capture on this planet (one molecule of carbon goes in, one molecule of oxygen goes out), theoretically spelling trouble for humanity’s quest to keep CO2 out of the atmosphere. This is early research that comes with several big caveats, and also exposes the challenges of studying a threat as new and omnipresent as plastic pollution.

Prochlorococcus is a kind of cyanobacteria (taking their name from their blue color) that floats in oceans the world over. We’re talking a lot of single-celled organisms, with an estimated global population of 1027. Like a plant, Prochlorococcus uses photosynthesis to manufacture its own food, taking in carbon and spitting out oxygen, making it a lead actor in the carbon cycle that humans have spun so out of control.

Unfortunately, the researchers found that in addition to carbon, the bacteria are taking in plastic toxins leached into the water, known as leachates. They did this in the lab by mixing different amounts of plastic into an artificial seawater base, in which they grew Prochlorococcus. They compared the results with a control of Prochlorococcus grown in untainted artificial seawater.

Moore and her colleagues were also able to measure photosynthetic activity at these different concentrations with an instrument that looks at the intensity of the cells’ fluorescence. “We saw parallels to what we saw with the growth: a decrease in photosynthetic efficiency, and in fact a pretty dramatic decrease with the higher concentrations,” says Moore.

Going further, the researchers looked at the genes of these bacterial populations, whether they were being expressed more or less in the presence of leachate. A large portion of those being expressed less were associated with photosynthesis, “which was absolutely consistent with what we were seeing in terms of the photosynthetic efficiency being decreased, and then the growth being decreased,” says Moore.

At fault could be any number of things in the plastics. Flame retardants, for one, and other additives that give plastic its flexibility. Zinc in particular might be having an outsized effect on the bacteria—it’s used in plastic components ranging from colorants to heat stabilizers.

Now, we’ve got some caveats to this study. The biggest is that the work was done in the lab, not out in the ocean, and necessarily so. To do an experiment like this, the researchers had to carefully control the samples of artificial seawater so they wouldn’t be tainted with other contaminants that could throw off the results.

Did plastic leachates have a startling effect on Prochlorococcus in the lab? Yes, absolutely. But that doesn’t mean the effect necessarily happens out in nature. “We know plastic is bad,” says Luiz Rocha, the curator of fishes at the California Academy of Sciences, who studies ocean plastic. “This paper shows it can negatively affect one of the most abundant photosynthetic organisms on Earth, but we don’t know if the concentrations of these chemicals ever get this high in the ocean.”

“I have the exact same problem with sunscreens,” Rocha adds. “All of the studies that analyzed their effects on corals were done in aquaria using very high concentrations only possibly found in beaches visited by thousands of people per day. So in reality, banning sunscreen is doing little to nothing to save coral reefs.”

None of this is to say that plastic isn’t terrible for the planet. Big pieces, known as macroplastics, are ending up in the stomachs of all manner of sea creatures. And while microplastics (bits under 5 millimeters long) are everywhere, science isn’t sure yet what their effects might be. “I’m the first to say our problem with plastics is the macroplastics,” says University of Michigan eco-toxicologist Allen Burton, who studies plastics. The bits that are strangling sea birds and clogging beaches and even sinking to the very bottom of the ocean. “We all know how horrible the impacts have been with so many species due to macroplastics. Microplastics, not so much. Leachates, probably even less.”

The core of the problem is that plastic pollution is a very new science. Researchers are still feeling their way through an environmental threat whose epicness is likely only second to climate change. Some 8 million metric tons of plastic enters the sea every year. And between 2015 and 2025, the amount of plastic pouring into the ocean could increase tenfold. That is objectively, monumentally terrible, but in exactly what ways it will be so, science isn’t yet sure.

“Everyone acknowledges we need more research, but the sky isn’t falling because of leachates or microplastics,” says Burton.

At least not yet. This is humanity we’re talking about—just give us some time to make things worse.