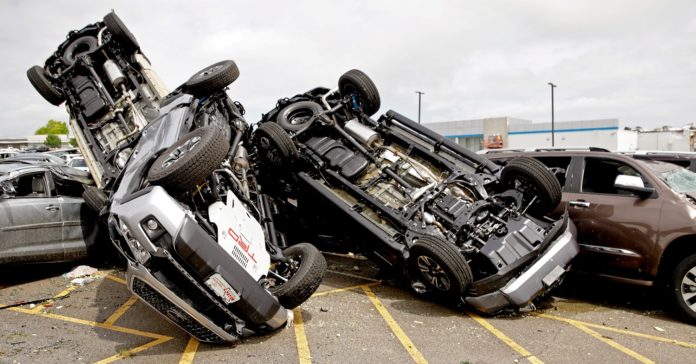 Editor’s note: This is a developing story about severe weather in the Midwest. We will update it as more information becomes available.

This week brings atmospheric devastation to the Midwest: nearly 200 tornadoes have torn through the region since last Friday, including Jefferson City, the capital of Missouri, on Wednesday night. All told, the disasters have left at least three dead and 25 injured. The damage appears to be extensive, as the flurry of storms cut a line from Texas all the way up through Maryland, with one twister touching down near Washington DC. Officials are still taking toll.

In an ideal world, meteorologists would be able to predict when and where a tornado is going to form, as they do with rainstorms, to mobilize emergency services and give people warning. But they face a couple problems. For one, scientists know how tornadoes form, but they’re still grappling with the monumentally complex physics at play: A tornado is essentially a swirling funnel of data you can’t get anywhere near. And two, to run models that crunch all that data, you need a hell of a lot of computing power. But in this era of ever more powerful supercomputers, researchers are getting more adept at using what data they have to understand and predict tornadoes.

First, a quick primer on how tornadoes form. They begin with wind shear, or winds moving in different directions on top of each other. In the Midwest, this comes from two opposing layers of air: On the bottom is moist air coming off the Gulf of Mexico; on the top is dry wind associated with the jet stream, blowing in from the west.

The next ingredient is a thunderstorm. This system takes the spinning ferris wheels and tilts them on their side. Now you’ve got rotation, which consumes the thunderstorm, transforming it into a tornado.

“Because of the geography and the unique juxtaposition of all those different air masses, they readily come together very frequently during the spring,” says Gold. “That’s why the Great Plains is a hotspot for tornados.”

To predict when and where a tornado might touch town, scientists have a range of tools at their disposal—they can measure wind speed and pressure through weather stations and watch doppler radar, for instance. Forecasters can then dispatch storm-chasing researchers to gather much-needed data should a tornado materialize. But tornadoes can be fleeting—most last for less than 10 minutes. And they’re relatively small and fast, at least compared to a slow-moving hurricane, which meteorologists can monitor over the long term using satellites. A tornado seemingly comes out of nowhere, making it difficult to alert the public of the threat.

One massive gap is the fact that a tornado is a highly vertical phenomenon. “Near the surface we have pretty dense observation networks, but above the surface the density goes way down,” says Adam Clark, a research meteorologist with the NOAA National Severe Storms Laboratory. “So we launch these weather balloons, and that measures temperature and dew point and wind as you go up into the troposphere, but those are spaced at really large distances from one another.” We’re talking maybe 100 sites across the entire country.

So instead of targeting tornadoes, researchers can look at a key component of them: supercells, which are thunderstorms with rotating updrafts. These storms tend to be long-lived, and are associated with a majority of severe weather in the US, as well as with extremely violent tornadoes. “If you can predict supercells, that’s basically a way of predicting where severe weather is going to happen, to a very large extent,” says David Stensrud, a meteorologist at Penn State University. Meteorologists can now predict where these tornado-birthing supercells may emerge, at a resolution of about 3 kilometers.

At IBM, which bought The Weather Company in 2015, a new system known as GRAF will focus on getting supercell thunderstorms right. Once live, it’ll produce global forecasts about 12 hours into the future. “This is crucial timing for predicting the occurrence of thunderstorms—and especially for identifying whether thunderstorms are likely to rotate and potentially generate tornadoes,” says Todd Hutchinson, IBM GRAF lead at The Weather Company.

Other researchers are tackling tornado modeling head-on, calculating such phenomena as how air moves at increasingly dense points in space. At the Texas Advanced Computing Center at UT Austin, executive director Dan Stanzione uses his center’s Stampede2 supercomputer to chew through massive simulations. Every night during tornado season, the supercomputer runs forecasts to predict where tornadoes might form the next day, so storm chasers can be dispatched to gather more data about tornado dynamics on the ground, and therefore further refine tornado forecasting.

“We’re throwing several quadrillion operations per second at it for six or seven hours,” says Stanzione. Between 15,000 and 18,000 processor cores are working at the same time, which is astounding but still a fraction of the supercomputer’s 350,000 total cores. (Various experiments can run in parallel.)

Still, the lack of data on various tornado attributes, especially higher in the atmosphere where only a few weather balloons and data-gathering aircraft might pass, means forecasts hinge heavily on their modelers’ assumptions. “That’s why in hurricane forecasting they actually show you the tracks on TV—the storm could go here or here or here,” says Stanzione. “Those are all the same software model but they’re slightly different initial conditions.” Same goes for modeling tornadoes.

As the machines and the underlying algorithms grow more powerful, they produce better predictions, which means storm-chasing researchers are more likely to go to the right place at the right time to collect better data, which goes right back into the system.

Yet another complicating factor here, though, is climate change. Might a warming world already be supercharging tornadoes, as it is doing to hurricanes? Answering that question requires gathering a large sample of tornadoes past and present. On one hand, climate change might actually cause wind shear to decrease, and therefore neuter a key ingredient of tornadoes. But a warmer environment might also have stronger updrafts, which would help tilt those spinning atmospheric ferris wheels.

Either way, meteorologists’ predictive powers are growing, thanks to burly computers and mountains of data. Tornadoes may be confounding, but they’re not altogether impenetrable.