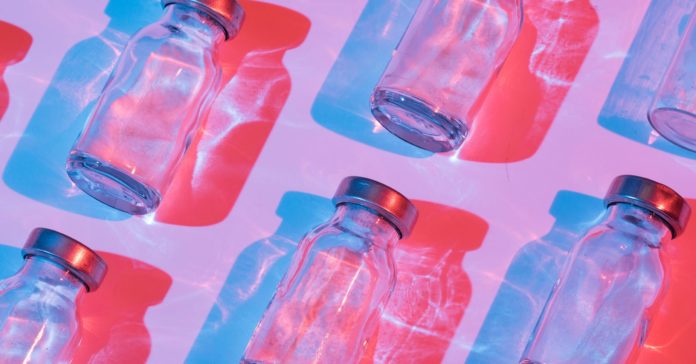 Ken Haller is 64, but he vividly remembers having measles when he was 7. And mumps when he was 10. And chickenpox when he was 11, which required him to keep socks on his hands so he wouldn’t gouge his skin from scratching. He still has a faint scar on his nose from one pustule he scratched too intensely.

Haller is also a pediatrician who has treated babies who developed meningitis from Haemophilus influenzae (now vaccine-preventable) and became blind—or died. Haller believes in vaccines, which is why he volunteered to test three different influenza vaccines that weren’t yet approved by the Food and Drug Administration—including against H7N9, a strain of influenza seen as a plausible source of the next pandemic.

“I know how much misery they prevent in the world,” says Haller, an associate professor of pediatrics at Saint Louis University School of Medicine. “It’s really my obligation to put my body on the line and volunteer for vaccine studies when I can.” It helps that his university has a Center for Vaccine Development, which runs numerous research studies with both the government and pharmaceutical companies.

Haller worries about the small but growing number of people who are not vaccinating their young children. Almost 50,000 children born in 2015 had received no vaccines by the age of 2, according to the Centers for Disease Control and Prevention. And a measles outbreak spread by unvaccinated people who traveled to other countries is the nation’s largest since the disease was considered eliminated in the United States in 2000.

Haller is an outspoken advocate for vaccination. Thousands of others like him, who believe in the safety of vaccines, have volunteered to test new formulations against dozens of diseases, including Ebola, malaria, and tuberculosis. These volunteers get little coverage by the news media. But they are the ones who will protect humanity from the next pandemic.

About 1,660 people enrolled in about 30 trials this past year at one of nine vaccine testing centers funded by the National Institutes of Health. Beyond the arm jab—or two to three, if there are multiple doses—vaccine volunteers return for months to have blood drawn for testing. They typically receive $50 or $75 per visit. The money is a draw for some, but they also share a sense of altruism and a firm belief in science.

“They are hastening the development of a potential intervention that may ultimately save people’s lives,” says Anthony Fauci, director of the National Institute of Allergy and Infectious Diseases. “If you get involved in an early vaccine trial, and then five or seven years later you read in the newspapers that the vaccine has been developed and it’s saving lives, you get a good feeling that ‘I’m part of that.’”

Rachael Bradshaw, a senior genetic counselor who also works at Saint Louis University’s medical school, saw images of babies with microcephaly in 2015 when the Zika outbreak hit South America. She knew the heartbreak of the mothers; she counsels families with children who have birth defects, including microcephaly.

When she saw a notice about a Zika vaccine trial, she signed up without hesitation. “We rarely can prevent birth defects. It seemed like a great opportunity that doesn’t come along very often,” says Bradshaw. The Center for Vaccine Development was recruiting 90 healthy adults to test the safety of a vaccine modeled after one for Japanese encephalitis, a virus similar to Zika that is also transmitted by a mosquito. Bradshaw had a health exam, including a pregnancy test. Then she got two shots, weeks apart, and returned periodically for the next year to have blood drawn. She can’t be sure if she had the vaccine or the placebo (an inert substance used as a comparison). She had no side effects, except a sore arm. (Volunteers sometimes have a day of achiness or flu-like symptoms, but serious effects from the vaccines are “extremely infrequent,” Fauci says.)

Some people are willing to go beyond taking a couple of doses of an unapproved vaccine. In so-called challenge studies, participants are exposed to a pathogen, such as influenza or norovirus, the proverbial “stomach bug” that causes nausea, vomiting, and diarrhea. Yes, people actually volunteer to vomit for science—and for $200 a day for six days in a closed health care unit. If development is successful, a vaccine against the notoriously transmissible norovirus would enable people to travel on cruises without fear of encountering a mass illness on the ship.

Brittany Robinson once participated in a drug safety study—in part, to “pay it forward” after years of treatment helped her oldest son overcome a heart defect. She now works as a clinical research coordinator, recruiting people for the drug and vaccine trials at the Hope Clinic of Emory University in Atlanta, including challenge studies.

“I try to let people know that they’re doing something good for humanity,” she says. “I know that sounds corny, but you really are.”

It takes hundreds or even thousands of volunteers to conduct clinical trials showing safety and efficacy before the Food and Drug Administration approves a new vaccine. Historically, their development has not always been above-board. In the mid-20th century, when many vaccines were being developed against diseases ranging from polio to measles, researchers looked to institutions for a testing pool. They were full of healthy subjects—and vulnerable people. Prisoners or children with developmental disabilities received experimental vaccines, often with limited information for the adults or parents about potential risks and benefits.

Today, vaccine trials are monitored by Institutional Review Boards, groups of people independent of the research, or even the academic institution, who oversee the study to protect the rights of human subjects. “Now, the ethical restraints are appropriately stringent,” says Fauci.

Despite his strong pro-vax views, Haller feels empathy for parents who worry about the risks of childhood vaccines. Since the diseases are no longer prevalent, and the internet is rife with misinformation about vaccine dangers, they feel they are protecting their children. By getting experimental vaccines, he demonstrates his conviction that vaccine processes are safe. “As a physician who spends so much time recommending vaccines, it makes sense to be involved in the development of them,” he says.

The argument is even stronger when pro-vaxxers look to the future—a possible future without effective antibiotics. The World Health Organizations calls antibiotic resistance “one of the biggest threats to global health, food security, and development today.” Take, for example, antibiotic-resistant Clostridium difficile, which the CDC deems an “urgent threat.” The infection causes severe diarrhea, dehydration, and colon inflammation in half a million people each year and kills one in 11 people over 65 who acquire C diff in a healthcare facility. Then there’s multidrug-resistant staphylococcus aureus (MRSA), which can cause life-threatening sepsis, a severe reaction to infection that leads to organ and tissue damage. About 20,000 Americans die each year from MRSA.

Volunteers are testing experimental vaccines against both those diseases. They would likely be offered to vulnerable people, such as patients undergoing a hip replacement or bone marrow transplant.

If what’s past is prologue, such vaccines will be instantly popular. In 2009, a novel influenza strain (H1N1) emerged with the hallmarks of devastating contagion—61 million illnesses, 274,000 hospitalizations, 12,469 deaths in the first year. Emory’s Hope Clinic was engaged in the race for a vaccine. “We had a thousand people calling us for clinical trials,” says Nadine Rouphael, interim director of the clinic and principal investigator of the Vaccine Treatment and Evaluation Unit. “We were able to enroll 180 subjects in less than three weeks.”

Carolyn Atherholt was among the first three people in the nation to receive the vaccine. She had previously volunteered for vaccine studies, without ill effects. “Somebody has to do it,” Atherholt recalls thinking. “I felt confident that the vaccine was safe.”

H1N1 continues to circulate every year. You can protect yourself—by getting the seasonal flu vaccine.

Top 10 Richest Women In The World

GizmoCrazed - June 5, 2012 1
Often women are not considered as competitive as men are in many fields. But today’s women have proven their worth beyond anyone’s expectations. They...

Should Cops Use Family Tree Forensics? Maryland Isn’t So Sure

It's Jony Ive's world now. We just live in it.

*The Expanse* Gets Artificial Gravity Right in This Neat Trick