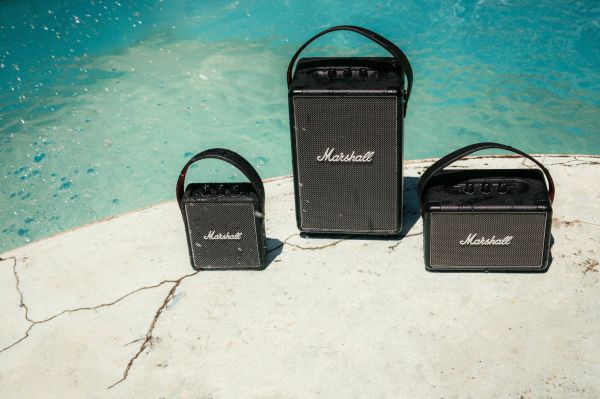 Marshall, the headphone company and not the loudspeaker company of the same vintage, today announced two new portable speakers. Like the company’s previous offerings, these speakers ooze a retro vibe. The two new speakers, the Stockwell II and Tufton, join the Kilburn II, but stand tall, literally and figuratively, apart from the rest of Marshall’s speakers as portable models with a vertical orientation, internal batteries, wireless capabilities and a rugged casing that should survive a trip outside.

The large Tufton impresses with clear, powerful sound even when on battery. The highs carry over a solid low-end. It’s heavy. This isn’t a speaker you want to take backpacking, but, if you did, the casing has an IPX4 water-resistant rating, so it’s tough enough to handle most weather. Marshall says the battery lasts up to six hours.

The smaller Stockwell II is much smaller. The little speaker is about the size of an iPad Mini, though as thick as a phone book. The internal battery is good for four hours and the casing is still tough, though sports an IPX2 rating, so it’s not as durable as the Tufton. The speaker is a bit smaller and the music quality is as well. The Stockwell II is a great personal speaker, but it doesn’t produce a pounding sound like the Tufton. Use the Stockwell II for a quiet campfire and the Tufton for a backwoods bonfire.

Sadly, these speakers lack Google Assistant or Amazon Alexa integration. Users either have to connect a device through a 3.5mm port or Bluetooth.

I’ve been a fan of every Marshall speaker I’ve tried. For my money, they feature a great balance of sound and classic design. Each one I’ve tried lives up to the Marshall name and these two new speakers are no different. Portability doesn’t come cheap. These speakers cost a bit more than their stationary counterparts. The small Stockwell II retails for $249 while the large Tufton is $399.