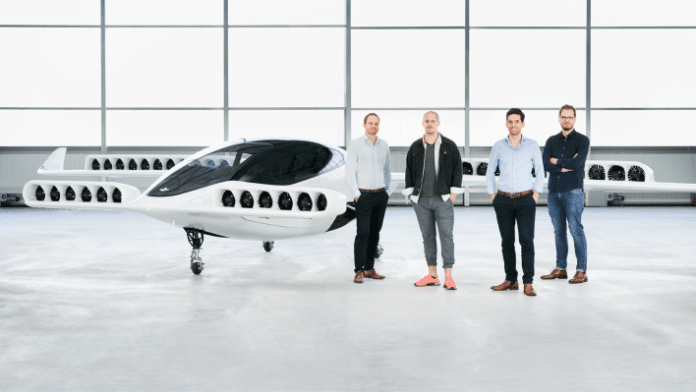 Lilium, the Munich-based startup developing an on-demand “air taxi” service, has unveiled a new five-seater prototype and is announcing to the world that a maiden flight for the new device was successfully completed earlier this month.

It’s not the first time a Lilium Jet — the company’s all-electric vertical take-off and landing (VTOL) device — has taken to the sky but it is the first time the new five seater has taken off and landed, following extensive ground testing. Lilium published a video of a two-seater version’s inaugural flight just over two year’s ago.

The new five-seater is a full-scale, full-weight prototype that is powered by 36 all-electric jet engines to allow it to take-off and land vertically, while achieving “remarkably efficient horizontal or cruise flight,” says Lilium

In a call, Lilium co-founder and CEO Daniel Wiegand described the test flight, which was a little behind schedule, as a huge step towards making urban air mobility a reality. The new jet performed in the sky as the company’s models and ground testing had predicted, providing much needed validation for the Lilium team.

The significance of getting to five seats shouldn’t be underestimated, either, as Lilium isn’t in the aircraft design and manufacturing business, but sees itself as a fully vertical mobility-as-a-service company, akin to an Uber of the skies, if you will. The technology, as groundbreaking as it needs to be, is an engineering means to an end: intercity travel that is less expensive, quicker and kinder on the environment. That’s the hugely ambitious aim, anyway.

With a top speed of 300 km/h and a range of 300km, Lilium claims its jet is capable of completing much longer journeys than the majority of its competitors. This is, in part, thanks to the fixed wing design of the aircraft. This will see it rely on the lift generated by the fixed wing to remain in the air, meaning it will require less than ten per cent of its maximum 2000 horsepower during cruise flight.

“This efficiency, which is comparable to the energy usage of an electric car over the same distance, means the aircraft would not just be capable of connecting suburbs to city centres and airports to main train stations, but would also deliver affordable high-speed connections across entire regions,” says Lilium.

For the record, the latest Lilium Jet first took to the air at 08.03 local time in Munich, Germany on 4th May 2019. The prototype aircraft was controlled remotely from the ground and Wiegand says it will now undergo a more rigorous flight test campaign to lay the foundations for certification of the aircraft against commercial aircraft safety standards. The next big milestone will be achieving transition flight where the aircraft moves from vertical takeoff to horizontal flight.

Wiegand also told me Lilium still expects to be fully-operational in various cities around the world by 2025. However, trial services will start earlier in several yet-to-be-revealed locations.

GizmoCrazed - July 20, 2016 0
NASA is joining with Baylor College of Medicine in Houston to operate a new institute charged with researching and developing innovative approaches to reduce...

The Difference Between PC And Mac Users [INFOGRAPHIC]