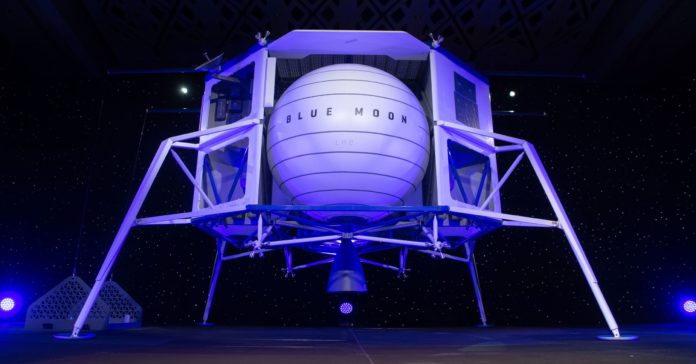 When Robert Heinlein wrote his masterpiece of space age realism, The Man Who Sold the Moon, he had no way of knowing how prescient it would be. Published in 1950, it tells the tale of Delos D. Harriman, the “last of the robber barons,” who is hell-bent on being the first man on the moon. Harriman drives himself to the brink of bankruptcy and madness chasing his lunar ambitions, which he feels can’t be left to the bumbling government bureaucracy to handle. At the dawn of the new space race, it feels more relevant than ever.

These days, billionaires with their own space programs are in abundant supply—Elon Musk, Paul Allen, Richard Branson, Robert Bigelow. But towering above them all is Jeff Bezos. Once the richest man in the world, Bezos is Harriman become flesh. For the past 19 years he has bankrolled his space company, Blue Origin, almost entirely out of pocket and has made his goal of colonizing the moon known. He is also, incidentally, a big fan of Heinlein.

Today Bezos unveiled a mock-up of Blue Origin’s lunar lander at a small invite-only event in Washington, DC. As detailed by Bezos, the plan is to send the lunar lander, called Blue Moon, to Shackleton Crater at the moon’s south pole. Last month, the company hinted at its plans with an enigmatic tweet depicting Endurance, the ship that carried British explorer Ernest Shackleton on a disastrous mission to Antarctica in the early 20th century.

Blue Origin’s lunar mission was first revealed in 2017, when The Washington Post obtained a seven-page white paper that the company was using to curry favor with NASA and the Trump Administration. The white paper detailed how the company planned to place Blue Moon, laden with several thousand pounds of equipment, at the lunar south pole. That lander would provide the basic infrastructure for future missions. After several robotic journeys to the moon, the stage would be set for the first crewed Blue Origin missions to the lunar surface.

“We are prepared to bring private capital to partner with NASA for a return to the lunar surface,” Brett Alexander, vice president of government sales and strategy at Blue Origin, told Congress in 2017. During this testimony, Alexander discussed Blue Moon in general terms and made the case for selecting Blue Origin to carry NASA payloads to the moon. The Blue Moon vehicle would be capable of flying on NASA’s Space Launch System rocket, he said, and would also take advantage of New Shepard’s vertical landing technology. He also called for more clarity on regulations governing commercial activity on the lunar surface before “extending an offer of partnership” between Blue Origin and the federal government.

Based on today’s presentation, Blue Origin’s moon mission has not substantially changed since Alexander’s testimony, but Bezos was able to provide far more technical details. According to Bezos, the Blue Moon lander will be able to soft-land on the lunar surface with up to 6.5 metric tons of payload weight. He claims the lander will be able to carry a wide variety of payloads on its upper deck and land as many as four large moon rovers simultaneously.

In addition, Bezos unveiled the BE-7 engine, which will be used to control the lander’s descent. The Blue Moon lander weighs roughly 33,000 pounds when it’s loaded with fuel, but by the time it touches down on the lunar surface, it will weigh a mere 7,000 pounds. For this reason, Bezos said, they had to develop a special descent engine that had “deep throttling capabilities,” so the engines could drastically reduce their force as the lander shed mass. He said the engine will undergo a hot test for the first time this summer, but he did not say when he expected the lander to fly for the first time.

Bezos says Shackleton Crater is a strategic destination that was chosen for its resources. The crater receives almost perpetual sunlight, which can be used for solar power. More important, however, the lunar south pole is believed to be home to large deposits of water ice, which can potentially be used for life support or broken down into its constituent elements—hydrogen and oxygen—and repurposed as rocket fuel. For this reason, Bezos said, the lunar lander is fueled by liquid hydrogen so it can be refueled on the surface of the moon.

For Bezos, the moon is just a stepping stone toward the larger goal of turning humans into a majority space-faring species. In the long term, he says, this will be necessary to counter resource depletion on Earth, but in the short term it also presents a large business opportunity. Bezos has previously spoken about the feasibility of factories in space, which could take advantage of the microgravity environment to build large-scale structures that wouldn’t be possible on Earth. And if George Sowers, the former VP of advanced projects at the United Launch Alliance, is right and “space water is the new oil,” Bezos could control the first gas station for interplanetary travel.

While Blue Origin’s plans all sound good on paper, a lot needs to go right before they become reality. For starters, they need to demonstrate they can safely fly humans to space and back. Last month, the company successfully completed the 11th test flight of its New Shepard rocket and crew capsule, which it says may begin ferrying tourists on short suborbital flights within the next few months.

The next step would be to send humans into orbit, which puts significantly more stress on a rocket and also requires a lot more power. The New Shepard rocket reaches a maximum speed of about 2,200 miles per hour, but to place a payload in orbit Blue Origin will need a rocket that can boost itself to 17,500 miles per hour. To meet this challenge, the company is developing a two-stage rocket, the New Glenn, which will be powered by seven BE-4 engines. Once it is completed, the rocket will be the largest in operation and capable of generating 3.85 million pounds of thrust, which dwarfs the 100,000 pounds put out by the New Shepard. In addition to boosting humans and satellites into orbit, a three-stage version of New Glenn will also be responsible for delivering payloads to the moon. So far, the company hasn’t done a single test flight with its BE-4 engine, but today Bezos said New Glenn would fly for the first time in 2021.

Even if Blue Origin nails all these technical developments on time, there are still a lot of uncertainties about the lunar south pole that need to be resolved prior to establishing a lunar base. Perhaps the biggest question involves the nature of the water ice at the poles. Although NASA first discovered traces of ice in the lunar regolith over a decade ago, the form this ice is in is an open question—it could exist as sheets, as casing around lunar regolith, or as small grains mixed in with the dust. Resolving this question will require exploratory robotic missions to the lunar surface and may ultimately require new technologies to extract the water ice from the regolith.

As Alexander noted in 2017, there are also regulatory concerns that need to get sorted out. The UN Outer Space Treaty explicitly states that the moon “is not subject to national appropriation by claim of sovereignty, by means of use or occupation, or by any other means.” This creates something of a legal gray area for corporations. Is mining the moon for profit or establishing a private moon base in violation of the Outer Space Treaty? For now, it seems that Bezos will face little resistance to his lunar ambitions, at least from the US government. Last October, NASA signed a Space Act Agreement “for the purpose of collaboration with Blue Origin to advance medium-to-large commercial lunar surface lander systems.” As part of this deal, IEEE Spectrum reported, Blue Origin promised to pay NASA $50,000 to “leverage the unique capabilities, expertise, and knowledge” at the agency.

The idea of living on the moon has captivated humans for centuries, but turning this dream into reality has proved remarkably hard. When astronauts first ventured to the moon in 1969, it required mobilizing national resources on an unprecedented scale. No nation or corporation has been able to repeat that feat since the last astronaut left the moon in 1972. But just because they haven’t doesn’t mean they can’t.

GizmoCrazed - April 23, 2013 0
German digital designer Eric Huismann has shared his insights on how the iPhone 6 would look like if it were to support a transparent...