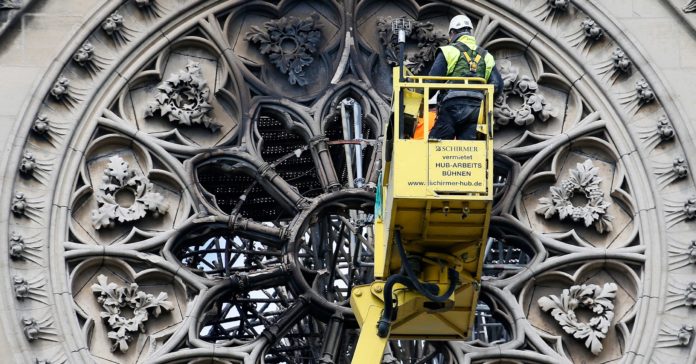 The roof of Notre-Dame Cathedral wasn’t just a roof. Sure, it kept the rain out. But what burned away in Paris in April was a technical marvel, the height—literally—of 12th- and 13th-century engineering. “If one imagines the stresses on a large sail of timber and lead rising over 100 feet from the ground, one can only marvel at the ingenuity and skill of these early builders,” as the historian Lynn Courtenay writes in an essay for the Society of Antiquaries of London. The wooden trusses—made of trees cut down in 1160 or so—were specially braced with an extra plate linking them to the walls, and clasps to keep them from sagging across the span. The wood was in tension, helping to hold the tall, thin walls; this charpentre, or roof carpentry, was about a quarter of the cathedral’s total structure. And now it’s gone.

That loss has already sparked another, metaphoric conflagration: the fight over what should replace it. France’s prime minister, Edouard Philippe, reportedly said he hoped that a spire to replace the 19th-century one lost in the blaze would be “adapted to the techniques and the challenges of our era.” The president, Emmanuel Macron, declared that the cathedral would be rebuilt in five years—prompting an open letter from multiple architects requesting that he slow his roll (it sounds better in the original French) and take a “scrupulous, thoughtful approach.”

How likely is any of that? “There is a subtlety to heritage architecture that is quite elegant, and there is a danger with contemporary materials and methods that you could do something outrageous,” says Douglas Pritchard, an architect at Johns Hopkins University who has made detailed 3D scans of Cologne Cathedral, begun in 1284.

That’ll all be subject to more than aesthetics and history, of course. “Do you have any idea what French Catholicism is like?” Clark says. “It’s pretty conservative. I don’t think you could get away with that.”

Even so, that doesn’t mean Notre-Dame and buildings like it never change. Medieval cathedrals were in many ways laboratories for innovation in engineering and design. Notre-Dame wasn’t finished in the 1160s, or the 1220s, or even the 1800s or the 1960s—all periods of major alteration to the cathedral.

So when it comes to restoration or preservation, the question is, what are they restoring? Even the famous west façade, where the tourists line up, isn’t original. “There was, planned and partly constructed, a west façade behind that, which they tore down,” says William Clark, an art historian at the City University of New York. “Virtually the entire envelope had to be rebuilt because it was in such bad shape … The 12th-century building was too tall for the size of the windows, so they tried enlarging the windows in the nave and cutting holes to get more light in there.”

And that was before Eugène Emmanuel Viollet-le-Duc got in there in the mid-19th century and “restored” the building, adding a new spire to replace the one destroyed in the French Revolution. “He added a lot of ornament and gussied it up a lot, and that’s people’s idea of what it represents now,” Clark says. “That’s pure invention.”

Not that there’s anything wrong with that. Buildings are supposed to grow, change, and—as the writer Stewart Brand has put it—learn from their users.

That’s true even when they look like their architects intended, mostly. Take the case of the Cologne Cathedral in Germany. Construction began in 1248, so roughly contemporary with parts of Notre-Dame, though it wasn’t completed until the mid-1800s … to the extent that anyone would say that Cologne Cathedral has ever been completed, as it famously always has scaffolding on it somewhere. The outside looks traditional—Gothic, looming, broody but spiritual. It also took heavy damage in World War II, and as a consequence has a roof not of wood but steel. “The problem with heritage structures is that they’re degrading daily. You can have weather wearing down stone or wood. You can have catastrophic events like what happened at Notre-Dame,” Prichard says. “Then you have things that are more incremental. Buildings were designed when acid rain wasn’t an issue. You have seismic issues.”

Laser scans like this one of the Cologne Cathedral make it easier to maintain or rebuild a church as its builders intended it.

Scans like the ones Pritchard has done at Cologne, or the ones that Andrew Tallon and others did at Notre-Dame, preserve the details of those buildings down to the scale of centimeters. That’s important for history, and for conservation. Pritchard hopes that digital scans like Tallon’s could help show how the stone itself, heated by the fire and cooled by firefighters’ efforts, might have changed or deformed—so that whoever remodels Notre-Dame can tell what else might have been more subtly damaged. “The issue is, do you put it in a glass box and try to keep it there? That’s one argument. And a lot of people like that, the idea that it is preserved as opposed to conserved,” Pritchard says. At the extreme, that’s called anastylosis, recapitulating the original materials and design of the building. It’s not the only approach, though. “Some of the heritage sites in the world, you’ll see that when they do an intervention on the building they make sure you can tell the difference between old and new.” In Cologne, for example, new statues in the north part of the choir are stylistically different, so people can tell.

Still, at the other end of the continuum from anastylosis, you can find radical approaches that seem to honor both the magisterial intent of a cathedral and the technical prowess of its creators. In the small Spanish town of Vilanova de la Barca, the architecture firm AleaOlea utterly reconstructed a 12th-century church heavily damaged in the 1930s, in the Spanish Civil War. Now, for sure, the parallel to Notre-Dame isn’t perfect; Santa Maria de Vilanova de la Barca was all but ruins by the time the architects got to it. Most of the stone walls still stood, and some of the original stone vaults, but that was about it. “We quickly realized that the church demanded a strong architectural restoration. We worked with the idea of a contrast between old and new parts,” says Roger Such, an architect at AleaOlea. “When you work in architectural restoration and heritage, it is very difficult to establish any sort of theory. Each work deserves singular thought. In the Church of Vilanova de la Barca the old parts were just ruins … that’s why we decided to incorporate a new view.”

Such built new, airy white walls and translucent screens, futuristic spaceships blended to the old stone walls. They dangled lights from the new ceiling and cut square windows in a new wall. Light pours in and kind of swirls around—just like in a Gothic cathedral. “We preserved the most important thing: the atmosphere of a church,” Such says. With the right kind of craft, even the oldest buildings can still learn new tricks.