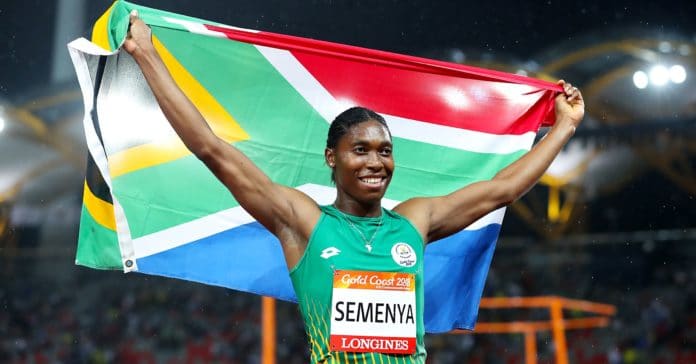 Olympic gold medalist Caster Semenya received bad news about her racing career last week, news that centered on the particulars of her body. Those probing, intimate details shaped a controversial rule of the International Association of Athletics Federations, the governing body of the running world. And they are now determining the fate of other athletes.

The Court of Arbitration for Sport decided last week to uphold an IAAF rule that would require Semenya to take testosterone suppressants to compete in the women’s division in her best events, the 800-meter and 1600-meter races. Almost immediately the decision rippled out to other runners. Athletics Kenya announced on Friday that it had dropped two female sprinters from its team for the IAAF World Relays championship this weekend, after blood tests revealed high levels of testosterone.

The dispute, however, is about much more than testosterone. Semenya’s medical status as an intersex person was leaked to the press in 2009. Semenya herself has never referred to herself as intersex, instead simply stating, “I am a woman and I am fast.” The bottom line is that her body naturally produces more testosterone than the average woman, and some of her competitors and some athletics experts believe this gives her an unfair advantage.

But others question whether testosterone is the athletic miracle worker it has been made out to be. In fact, even the CAS has said this: When, in 2015, it ruled on the case of Indian sprinter Dutee Chand, who also has uncommonly high testosterone, the CAS determined that the IAAF had not mustered sufficient scientific support to justify a policy against naturally high testosterone.

The reality is that although testosterone plays a role in elite performance, the details of the science get murky very quickly. The athletes with the highest testosterone are not always the winners. Ones with lower levels can also take home gold. With the science unresolved, some of Semenya’s defenders see the CAS’s ruling as the latest salvo in a broader backlash against people who have bodies that defy stereotypes of womanhood.

“This decision is biased, not only based on the fact that Caster is intersex, but that she is from South Africa, she’s a Black South African, she’s queer, and she’s gender non-conforming,” says Sean Saifa Wall, co-founder of the Intersex Justice Project. “We’ve only seen this kind of humiliation and shaming of Black and brown intersex athletes, particularly Caster Semenya and two other runners,” including Chand.

Advocates point out that scientific-seeming methods of separating the sexes can often be weaponized against gender and sexual minorities, such as intersex people. “Science is a tool and a method, but of course that can be in anyone’s hands,” says Hans Lindahl, communications director at intersex advocacy group InterACT. “It’s hard to take socially constructed categories like gender and sex and try to clump them into science. It doesn’t work.”

Historically, the weight of sex testing has always fallen on women’s sports. So it is also the place where the extremely difficult questions of defining gender boundaries are now being hashed out. “People want to believe that there’s some essential difference between women and men that makes them completely distinct and explicit categories,” says trans author Julia Serano, who also has a PhD in biology. “That essence doesn’t exist in real life.”

Sex testing of female athletes began with the intent of trying to catch men masquerading as women to try to win medals, though no man has ever been caught doing so. Instead, it was intersex women who were often thrown out of sports as a result of these tests.

The International Olympic Committee switched from mandatory genital inspections to chromosome testing in the 1960s, and decades ticked by before the policy was formally challenged. In 1985 a genetic test indicated that 24-year-old runner Maria José Martínez Patiño, of Spain, had XY chromosomes, despite her body displaying a completely female phenotype. Because of the test, she was kicked off the national team and had her medals stripped; she even lost her boyfriend in the process.

Patiño challenged the ruling on the basis that her body was biologically incapable of processing the excess testosterone it naturally produced and won her challenge. Athletics associations eventually moved on to new methods of gender testing.

According to a New York Times report, in 2014 Chand was subjected not only to hormonal testing but to a chromosomal test and gynecological exam as well. “To evaluate the effects of high testosterone, the international athletic association’s protocol involves measuring and palpating the clitoris, vagina and labia, as well as evaluating breast size and pubic hair scored on an illustrated five-grade scale,” reads the Times report.

Chand won her appeal by arguing that excess testosterone doesn’t provide an athletic advantage in her individual events, the 100-meter and 200-meter dashes. The Chand precedent is why the IAAF, in its most recent ruling, limited its ban to individual events that Semenya competes in, despite IAAF’s own study showing that competitors with elevated testosterone levels in several throwing events saw an even bigger advantage than Semenya did in the middle-distance events.

Joanna Harper, a trans woman and biophysicist who testified on IAAF’s behalf in the Semenya case, argues that testosterone levels are the most important metric for deciding sex because sports divisions are ultimately split between male and female, and a distinction needs to be made somehow. She notes that all three judges in the Semenya case agreed that testosterone was the primary differentiator between male athletes and female athletes.

“I have a lot of empathy for [Semenya],” says Harper. “It’s got to be enormously hard to be identified as female at birth, raised female and you don’t find out until [age] 18 or so that there are serious issues. And she always knew she was different of course…But on the other hand I think that billions of potential female athletes deserve to have a category in which to enjoy meaningful competition.”

Although Harper says she’s not thrilled with how the IAAF has applied its rule to just a narrow band of events that Semenya competes in, she says it opens the door for a different route for Semenya’s career. Harper suggests that she run the 3000- or 5000-meter races instead, because higher testosterone hasn’t been shown to convey a significant advantage in those events. “She’s probably not going to lower her testosterone, she’s probably going to run the 3000 and 5000 and she’s going to be very successful. Not Olympic-medal-winning successful, but still more successful than most athletes can only dream of.”

Earlier this week, the IAAF released a statement indicating that Semenya could compete in her favored middle-distance events—as a man. So according to the new paradoxical rules, a single person can be considered a man for some events and a woman for others.

Semenya’s case is tangled up in a larger battle over who gets to count as a woman in modern society. Indeed, Fox News last week incorrectly identified Semenya as a “transgender athlete,” which she is decidedly not. Others on social media scrutinized Semenya’s muscular build or the fact that she is a lesbian, even going so far as to speculate on her genitals in order to prove that Semenya is “really a man.” According to Serano, the gender policing of intersex and gender-nonconforming bodies is a direct result of the anti-trans movement, which is attempting to enforce the exclusion of trans women from female spaces. “The targeting of transgender and intersex athletes and gender-nonconforming athletes seems very similar to what is happening with policing of bathrooms and just generally the anti-trans hysteria that’s been going on,” Serano says.

Some medical experts worry that classifying men and women according to testosterone levels, as the IAAF has, could easily go too far. “I don’t think anyone is prepared to actually see testosterone variations in XX individuals,” says Frances Grimstad, who works extensively with trans and intersex individuals as a pediatric and adolescent gynecology fellow at Children’s Mercy Hospital in Kansas City, Missouri.

She is especially concerned about the implications for women with polycystic ovary syndrome, a hormonal condition that can include heightened testosterone and that affects up to 25 percent of cisgender women. “It has never been considered an intersex condition,” Grimstad says, but she notes it is not uncommon for those with the condition to have testosterone levels similar to Semenya’s. “Given the rising incidence of it in our populations here, it is more than likely that we have much greater testosterone variation in cis females than we are prepared to admit.”

Women with PCOS often end up growing facial hair and developing slightly masculine traits. Determining womanhood based on testosterone levels, Grimstad says, could have unintended consequences for a broader spectrum of women across society. “If you were to all of a sudden take all of my PCOS patients and tell them that because they have elevated testosterone they are not considered female enough to compete with other females, I think that that would open a social can of worms.”

And that debate over femininity, she argues, is something we’re just not ready for.

Only 2% Of The Population Can Solve This Einstein Riddle