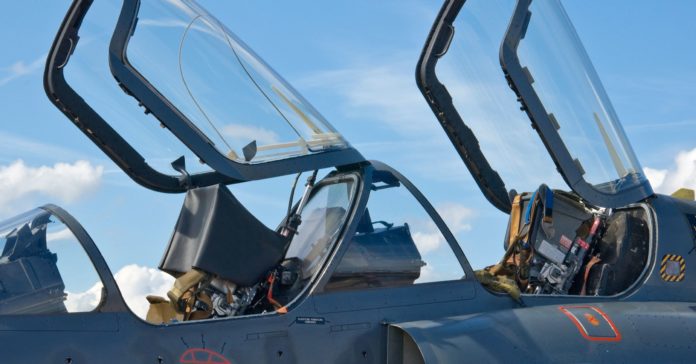 I’ve never been in a situation where I had to choose between the option of crashing in a jet or ejecting from the jet. I hope I would choose the ejection option, since it would more likely lead to a better outcome than crashing. That said, if you look at the ejection systems in modern military aircraft, they look brutal. The acceleration on ejection must be enormous.

OK then—let’s see if I can measure the acceleration of an ejection seat using video analysis.

This particular video appears to be an ejection seat test from an Aero L-159 Alca. The type of plane is sort of important because I can use it to determine the scale of the video. Along with discerning the scale, I can assume that the video frame rate is in “real time.” That means that from the position time data I get from each frame, I can estimate the acceleration during the ejection.

Let’s get right to it. Here is a plot of the vertical position as a function of time (using Tracker Video Analysis).

Perhaps you can see the problem here. This data shows the motion of the ejection seat both during the ejection, after the ejection, and then with the parachute opening. However, the part where the ejection seat is accelerating is just those very few data points right at the beginning of the graph. It’s not enough to get a nice measurement of acceleration. That means I have to take a different approach.

In the graph above, the ejection seat moves upward with some velocity after the launch rockets are fired. Even though the seat is actually accelerating downward (because of the gravitational force), it’s good enough to get a linear fit and find an approximate post-rocket acceleration with the slope of this line at a velocity of 19.4 meters per second (43.4 mph). I can now use this velocity along with the definition of acceleration:

Since the ejection seat started from rest, the change in velocity (in one dimension) is just the final velocity. For the change in time, I can just look at the number of frames that show the ejection seat rocket firing. From the video, this seems to correspond to a time of about 0.32 seconds. OK—just to be clear, this is the time from the ejection until the rockets turn off. There is a system that pushes the pilot out of the cockpit before the rockets fire and I am including that as part of the acceleration. Also, it seems that the rockets are still firing for a little bit even though the seat seems to not be accelerating much. But really—this is why I’m calculating the average acceleration instead of the instantaneous acceleration.

OK, I have to make one comment. The g-force is weird (but still useful). Although it has the word “force” in it, it really is a measure of acceleration and not force (though g-force does sound cool). But what about the following situation. Suppose you are standing on the ground (or maybe sitting in a chair) and not doing anything but reading this post. What is your acceleration? It’s mostly zero (not exactly because of the Earth’s rotation). But what is your g-force? Technically, this would be zero g’s. However, we often say this is 1 g since that’s what you feel. Yes, the gravitational force “feels” just like acceleration. This is the equivalence principle—the idea that the experience of gravity and acceleration are indistinguishable. Yes—if you think about that, it’s super weird.

GizmoCrazed - October 4, 2017 0
Is this the new semi truck Tesla is set to unveil at the end of this month? The truck, posted to Reddit (then deleted,...

Improving Offshore Oil and Gas Operations with Internet of Things

DigitalGlobe and Orbital Insight Join Up to (Really) Enhance Images From...