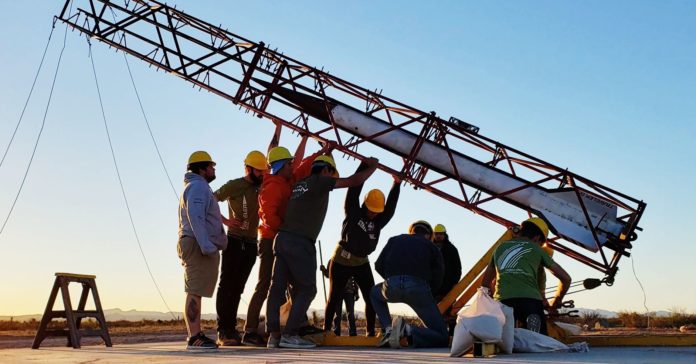 In the early morning of April 21, 10 students from the University of Southern California’s Rocket Propulsion Lab piled into the back of a pickup truck with a 13-foot rocket wedged between them and drove down a dusty dirt road to a launchpad near Spaceport America, in southern New Mexico. When they arrived, their teammates helped them lift the 300-pound rocket onto a launch rail. Dennis Smalling, the rocket lab’s chief engineer, began the countdown at 7:30 am. When he reached zero, Traveler IV shot up off its launchpad, exhaust and flames pouring from its tail.

The USC team is one of several groups of college students across the United States and Europe that have been racing to send a rocket above the Kármán line, the imaginary boundary that separates Earth’s atmosphere and space. For most of the history of spaceflight, sending a rocket to space required mobilizing resources on a national scale. The V-2 rocket, which was the first to reach space in 1942, took well over a decade to develop and cost the Nazis a fortune. In the eight decades since, dozens of other countries—and a handful of billionaires—have produced their own rockets capable of suborbital flight. But several student teams, including some from the top aerospace universities in the US (Princeton, MIT, UC Berkeley, Boston University), set out to show that they could do it too.

As Traveler IV crossed the sky, the USC team and dozens of spectators watched in apprehensive silence, shielding their eyes from the rising desert sun. They scanned for signs of the rocket and listened to the avionics lead, Conor Hayes, call out the altitude. Eight kilometers … 13 kilometers … 17 kilometers. Just under three minutes after launch, a member of the launch team radioed in with the words that everyone was waiting to hear: “The drogues have fired.” The first set of parachutes had deployed at apogee, suggesting the rocket had made it to space as planned. Peter Eusebio, the team’s recovery lead, let out a whoop and turned to embrace Sidney Wilcox, the team’s launch coordinator, and the pair began jumping with glee. All that was left to do was find the rocket.

The USC rocketeers recovered their spacecraft 12 miles downrange from where it had launched. For an object that had just been traveling at five times the speed of sound, it was in pretty good shape. And when they analyzed the flight data, they concluded with near certainty that the rocket had breached the Kármán line, making the USC Rocket Lab only the second amateur group to ever send a rocket to space. The vehicle had reached an altitude of 339,800 feet and achieved a top speed of 3,386 mph.

Although breaching the Kármán line was the goal of the collegiate space race, this “official” space boundary is somewhat arbitrary. NASA, for instance, gives astronaut wings to any pilot that flies 50 miles above Earth’s surface, which is some 60,000 feet below the Kármán line. By these metrics, the USC team was well into space proper, even accounting for any measurement errors by the onboard accelerometer tracking the rocket’s ascent.

The USC Rocket Propulsion Lab has been chasing this goal since it was founded in 2005. It began only a year after the Civilian Space Exploration Team became the first group in history to send an amateur rocket into space; that group repeated the feat in 2014.

Like the Civilian Space Exploration Team, the USC lab focused on solid fuel rockets, which require far less complicated—and dangerous—motors than the liquid fuel rockets launched by SpaceX or Blue Origin. Some of the rockets being developed by the leaders of the collegiate space race have two stages, but the USC team opted for a single-stage rocket. If you’re trying to get to orbit, which requires reaching speeds of more than 17,000 mph, a two-stage rocket is a must, so as to jettison the dead weight of empty propellant tanks. But for lower altitudes and speeds, a single-stage rocket can do the trick.

In 2013, the USC rocket team attempted its first space shot with the Traveler I, which exploded just seconds after launch. A similar fate befell Traveler II, which was launched the following year. Clearly, it was time to make some changes. Following the failure of the first two Traveler rockets, the USC team began to develop the Fathom rocket and Graveler motor as testbeds for flight systems that would be used on subsequent space shots. The Fathom rocket was effectively a scaled-down version of the Traveler rocket that allowed the USC team to build multiple rockets in quick succession to see how the subsystems worked together. After extensive ground tests, the team’s Fathom II rocket set a record when it reached an altitude of 144,000 feet in 2017. Other collegiate rocket teams had reached only about 100,000 feet. The time seemed ripe to attempt another spaceshot.

In September 2018, the USC team launched Traveler III, which may have been the first collegiate rocket to make it to space. The team expected it to reach about 370,000 feet, but the USC team failed to activate the avionics payload, so none of its flight data got recorded. Prior to the launch of Traveler IV, Tewksbury says, the team overhauled its operational procedures to avoid a similar gaffe.

USC may have been the first collegiate team to make it to space, but the race is far from over. A number of teams, including USC, are exploring liquid-fueled rockets, despite the greater engineering challenge. They offer several advantages, including greater degrees of control and the ability to carry more payload mass to altitude. The huge costs of building such rockets makes them daunting for universities, but the same thing could have been said about solid-fueled rockets just 15 years ago.

Tewksbury says the USC team is up for the challenge. But the team is also not done with its solid-fuel rockets. The Rocket Propulsion Lab hopes to also claim the title of the highest amateur rocket launch in history. This means adding another 50,000 feet to their altitude, but once you’ve traveled 64 miles into the atmosphere, what’s another dozen miles?