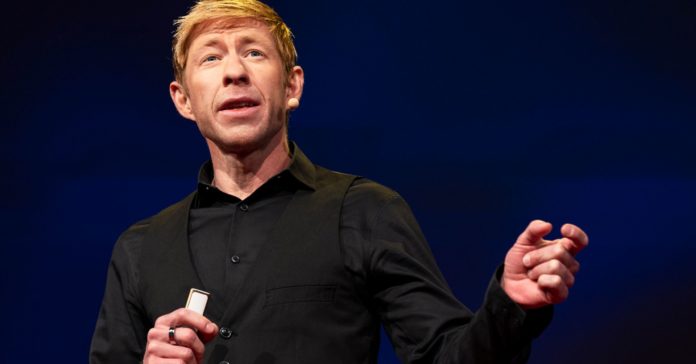 The whole world is exhausted. And it’s killing us.

But particularly me. As I write this, I’m at TED 2019 in Vancouver, which is a weeklong marathon of talks and workshops and coffee meetings and experiences and demos and late-night trivia contests and networking, networking, networking. Meanwhile, I’m sick as a dog with a virus I caught from my 3-year-old, I’m on deadline for what feels like a bazillion stories, and I’m pregnant, which means I need coffee but can’t have too much, and need sleep but can only lay on my left side, and can’t breathe without sitting propped up with a pillow anyway, since I can’t safely take any cold medication.

According to neuroscientist Matthew Walker, I’m doing serious damage to my health—and life—by not sleeping enough.

“The decimation of sleep throughout industrialized nations is having a catastrophic impact on our health, our wellness, even the safety and education of our children. It’s a silent sleep loss epidemic. It’s fast becoming one of the greatest challenges we face in the 21st century,” Walker, an expert in sleep at UC Berkeley and author of the best-selling book Why We Sleep, told a rapt TED audience on Thursday.

After a morning of bleak talks on climate change and the harm of viral misinformation online—punctuated by frequent exclamations of “Well, that was alarming” by TED science curator David Biello, and stolen glances at Twitter for updates on the Mueller report and the happenings in the outside world—Walker’s talk felt like a jolt of caffeine to a weary system. (A comparison Walker might hate. He warns, in the strongest possible terms, about the harms of that particular stimulant.)

He ran down all the ways in which sleep deprivation hurts people: it makes you dumber, more forgetful, unable to learn new things, more vulnerable to dementia, more likely to die of a heart attack, less able to fend off sickness with a strong immune system, more likely to get cancer, and it makes your body literally hurt more. Lack of sleep distorts your genes, and increases your risk of death generally, he said. It disrupts the creation of sex hormones like estrogen and testosterone, and leads to premature aging. Apparently, men who only sleep five hours a night have markedly smaller testicles than men who sleep more than seven.

“Sleep loss will leak down into every nook and cranny of your physiology,” he said. “Sleep, unfortunately, is not an optional lifestyle luxury. Sleep is a nonnegotiable biological necessity. It is your life support system.”

Of all the TED Talks I’ve heard this week, this one felt aimed right at me. At my heart. And my withered and overworked hippocampus, my brain’s “information inbox,” as Walker calls it. At my swollen, dark-ringed eyes. Yes, OK, maybe it’s because I’m so tired, and was so primed to hear it. But I wasn’t alone.

Everyone is obsessed with sleep. And they know they’re not getting enough—hence the growing demand for sleeping pills, the emergence of sleep tracking devices (Walker wears an Oura Ring to track his), smart beds, Alexa integrations to put you to sleep, and mindfulness sleep apps. Arianna Huffington famously left journalism to found a company devoted to sleep and wellness.

After Walker’s talk, he was mobbed by acolytes in the conference center desperate to tell him how much his book—which covers the same topic as his TED talk—changed their lives, how they’d given up caffeine and alcohol and stopped feeling bad for leaving parties early to get sleep or refusing to look at work emails in bed. As the next session of TED talks was starting up, Walker kept trying to escape so he could watch, but people wouldn’t let him pass. They wanted to know what to eat, when to sleep, how to dream.

His answers? Don’t drink caffeine or alcohol. Go to bed at the same time every night and wake up at the same time every morning (even on the weekends). Sleep in a cool room. If you are lying awake in bed, listening to the litany of worries your brain is churning through, get up, go into a different room, and do an activity, then return to bed when you’re ready. “You wouldn’t sit at the dinner table waiting to get hungry, so why lay in bed waiting to get tired,” he told a TED attendee who’d asked for advice. Meditate to calm your nervous system and your mind. Don’t default to sleeping pills, which are “blunt instruments that do not produce naturalistic sleep,” he said. Eventually, he said, he may be able to offer an “affordable, portable” brain-stimulating device that would use transcranial direct-current stimulation to help people have deeper sleep. (Walker has just started a company called Stim Science, with backing from Khosla Ventures, to make such a product, he told WIRED.)

People listened hard. They took notes during his talk (which is uncommon at TED, to my surprise) and as he spoke to the crowd afterward.

His message came across as a rebuke of the idea that sleep deprivation and success somehow go hand in hand. Tim Cook reportedly wakes up at 3:45 am to start work. Barack Obama said he only sleeps about 5 hours. He’s a “night guy.” Donald Trump and Elon Musk both have said they sleep only a few hours a night. But Musk has also admitted to The New York Times that his work schedule was taking a toll on his mental health and whole life. Walker argued that it’s time to stop thinking that needing sleep is a sign of weakness or laziness. In fact, it’s the opposite.

Sleep makes us better at everything. “The disruption of deep sleep is contributing to cognitive decline,” Walker says—in aging patients at risk of or already experiencing dementia, and even in healthy people. “You need sleep after learning, to essentially hit the save button on those new memories so you don’t forget. But recently we’ve discovered that you also need sleep before learning. Almost like a dry sponge to suck up new information. Without sleep, the brain becomes essentially water logged.”

That sounds about right. Yesterday, I heard approximately 18 different TED Talks. But I had barely slept the night before, and I barely slept last night. When asked this morning which talk had been my favorite of the day before, it took me a full 30 seconds to remember a single one.

I’m determined to remember this one. In fact, I retreated to one of TED’s “sleep rooms” afterward and attempted a five-minute nap before writing this article in an effort to commit the talk to memory. I put on a sleep mask and let the white noise machine and a Pure essential oil diffuser lull me into a moment of calm. In the eerie quiet of this manufactured zen zone inside a behemoth conference center at the foothills of the North Shore Mountains, I almost forgot about the news cycle, about my head cold, about the Mueller report.

But then I remembered my deadline, bolted upright, unplugged the diffuser, plugged in my computer, and typed these words. Here’s hoping they help you, and me, get a little sleep tonight.

A Bizarre Form of Water May Exist All Over the Universe

GizmoCrazed - May 12, 2019 0
Recently at the Laboratory for Laser Energetics in Brighton, New York, one of the world’s most powerful lasers blasted a droplet of water, creating...