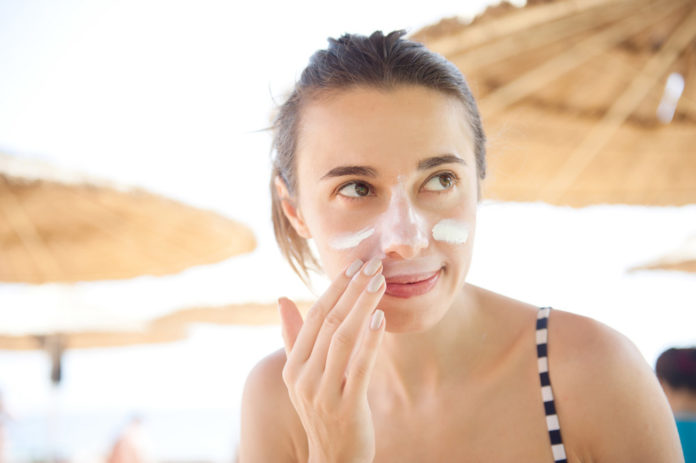 When people put sunscreen on their faces, they often miss the eyelids, an area prone to skin cancer. People using SPF moisturizers are even more likely to miss that area, a new study has found. (Credit: Tymonko Galyna/shutterstock)

Many facial moisturizers brag about their sun protection abilities. But new research shows that user error is stopping SPF-containing moisturizer from providing much of a defense against the sun’s harmful rays.

Researchers found that people miss more of their faces when putting on moisturizer than they do when applying sunscreen. The findings mean we need to pay more attention to better protect against skin cancer. And, when it’s really sunny out, sunscreen might be the better choice.

“We do recommend SPF in moisturizers because some protection is better than none,” said Austin McCormick, an ophthalmologist at Aintree University Teaching Hospital in the United Kingdom, who led the new research. “However if prolonged sun exposure is planned then sunscreen should be used as thoroughly as possible.”

In previous research, McCormick and his team found that people frequently miss parts of their face around the eyelids when they put on sunscreen. Skin cancer is the most common form of cancer and it develops most often on the head and neck. The eyelids are a troubling place to miss because as much as 10 percent of basal cell carcinomas, one kind of skin cancer, occur on the eyelids, McCormick said.

Since many moisturizers sold today contain SPF, the researchers wondered whether people might be better at covering their entire face with moisturizer than they are when putting on sunscreen.

The researchers had about 80 people put SPF30 sunscreen or moisturizer with the same sun protection factor on their faces. Then the researchers exposed the study participants to UV-A radiation. Tanning beds often give off this kind of radiation and it is not as damaging as UV-B, the type of rays that cause most sunburns and are thought to cause most skin cancers. Scientists then snapped a photo of the subject’s faces with a modified camera that captured the UV radiation exposure.

The photos revealed people missed even more of their faces when applying moisturizer than when putting on sunscreen, the researchers report today in the journal PLOS ONE.

When putting on sunscreen, participants missed about 11 percent of their faces, the researchers found. But they missed more than 16 percent when rubbing in moisturizer. What’s more is that subjects missed significant parts of their eyelids—and particularly the area between the inner corner of the eyelid and the nose—no matter if they were using sunscreen or moisturizer.

Since people tend leave the eyelid area vulnerable to sun damage, the researchers advise additional defenses. “Given that we have found that eyelids are frequently incompletely covered we recommend the use of genuine UV filter sunglasses and a hat to further protect the face and in particular the eyelid area,” McCormick said.

These Fully Transparent Solar Panels Could Transform Every Window Into A...