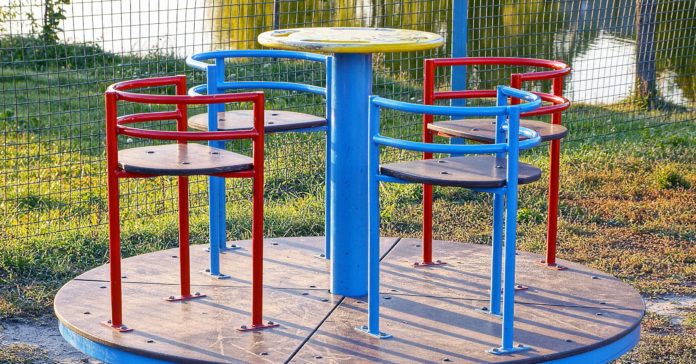 Why do people do such dumb things? In today’s dumb thing, these kids decide to use the wheel of a gasoline-powered scooter to spin up a small merry-go-round at a park. Oh, don’t worry, they have helmets on so everything should be fine. NO. Everything is NOT fine. This is why we can’t have nice things.

Of course, these people aren’t the first (or sadly the last) to try this stunt. It rarely ends well.

But what makes this such a difficult trick? Why do you want to keep as close to the center as possible? Of course, the answer is all about physics.

Forces While Moving in a Circle

It starts with acceleration. If you have an accelerating object, you need a net force on that object. This is the basic model for motion. It looks like this.

Yes, the “m” is the mass of the object and the “a” is the acceleration. But what about the arrows over the F and the a? The arrow means that those quantities are vectors. Both acceleration and force have directions as well as magnitude. Pushing with a force of 1 Newton (the unit of force) to the left is different from pushing with 1 N to the right. But if the object is accelerating (also a vector), there must be a force.

Then what is the definition of acceleration? Over a short time interval, I can define acceleration as the following:

If we want to talk about the physics of fools spinning around, however, velocity might not be the basic idea to use. If you are on a rotating platform, the magnitude of your velocity depends on how far you are from the center of the merry-go-round. A better quantity to consider is the angular velocity. This is a measure of how fast your angular position changes—and it is the same for any position on a rotating platform (but it could still change with time).

Using the angular velocity, I get the following expression for the magnitude of acceleration for an object moving in a circle.

You know I like to include some type of demonstration to support physics stuff. In this case, I want to show the difference in circular forces for the case where a person is farther from the center of rotation. I have this spinning platform (it’s very useful). On the platform I have two masses that are attached with rubber bands—one close to the center and one farther away. For a rubber band, the greater the force the more it stretches. So, the mass that stretches more has a greater force.

Here’s what that looks like (I have a top-mounted camera that rotates with the platform).

In case it’s not clear that the outer mass has a greater stretch, I measured it for you. The inner rubber band is 8 cm long (stretched) and the outer one is 13 cm.

So, what about this silly merry-go-round? How difficult would it be to hold onto this thing and not fly off? I’ll start with some estimations. Let’s say the human has a mass of 75 kilograms and starts at a distance of 15 centimeters from the center of the merry-go-round.

For the maximum angular velocity, I can just drop this video into Tracker Video Analysis to get a reasonable value of around 7.8 radians per second (74.5 rpm).

You might think I could just use this to calculate the acceleration and then calculate the force. Yes, I can and indeed I will do just that. However, there is a problem—humans take up space. That means that this dude is not moving in a circle with a radius of 15 cm. Well, PART of him is doing that but other parts of his body have a smaller radius of motion. So, for calculating the acceleration which radius should I use? It’s a complicated question (one that I will answer in the future), but as a rough approximation I will just use the 15 cm.

The acceleration of this dude would be 9.1 m/s2 requiring a force of 684 Newtons. This is a significant force—especially if you compare it to the dude’s weight of 735 Newtons. It’s like he is hanging from a pole in order to stay close to the center of the circle. But if he falters, just a little bit, bad things will happen. If his radius increases by just 5 cm, the required force jumps up to 912 Newtons. Next thing you know, he is flying off the merry-go-round and he’s not so merry.

But still, this is a super dumb idea. Even if you know the physics of spinning in a circle, you are going to be better off doing something else.