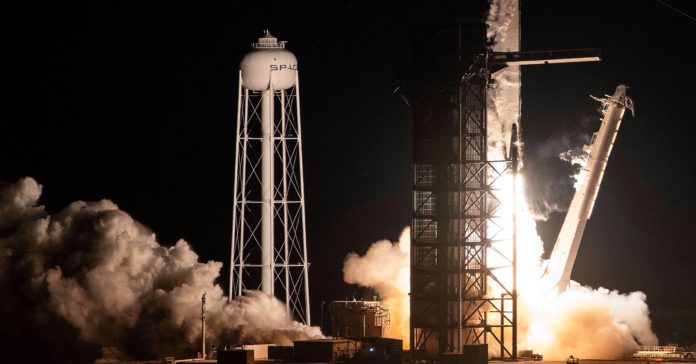 During a series of engine tests of SpaceX’s Dragon spacecraft this past Saturday, the vehicle experienced what the company has characterized as an “anomaly.” Based upon an unauthorized leaked video of the accident, the company was counting down toward a firing of the Dragon’s SuperDraco thrusters when the vehicle exploded.

SpaceX has not validated the video, but it is consistent with verbal accounts of the failure that have been shared with Ars.

After the accident, large dramatic clouds of orange smoke billowed above Landing Zone 1, where SpaceX conducted Saturday’s engine tests. According to one source, the orange plumes were the result of between one and two tons of nitrogen tetroxide—the oxidizer used by Dragon’s SuperDraco engines—burning at the location. After a dramatic weekend, what follows is a summary of what we know, what we don’t know, and where SpaceX goes from here.

The Crew Dragon capsule in question is the same one that successfully flew a demonstration mission to the International Space Station in March. The spacecraft was being prepared for a launch abort test this summer. During this test, the Dragon would have launched from Florida on a Falcon 9 booster and then fired its powerful SuperDraco engines to show that the Dragon could pull itself safely away from the rocket, in case of a problem with the booster before or during flight.

Now that SpaceX has lost this capsule, it must find a substitute for this launch abort test. It is not clear whether it will fabricate a boilerplate vehicle with a SuperDraco system of eight thrusters, or repurpose one of the Dragons it has built for crewed flights to the space station. Either way, this is a significant materiel loss for the company.

How did it happen?

We don’t know. According to the leaked video, the anomaly occurred within the final 10 seconds of the countdown, and it is not entirely clear whether the SuperDraco engines had begun to fire. One source indicated that the company has a lot of data about the failure—this was a ground-based test, so the vehicle was heavily instrumented—so theoretically finding the root cause of the accident should be more straightforward than if a problem had occurred during a real flight. The best-case scenario, in terms of causing delays for SpaceX, would be that someone mishandled the ground systems equipment. The worst-case scenario is that there is some undiscovered but fundamental design problem in SuperDraco thrusters.

During past accidents, SpaceX founder Elon Musk has been fairly forthcoming about the cause of the failures, and we hope for similar transparency with this accident. I would argue that, since this vehicle will eventually carry humans and is funded largely by NASA, transparency is essential to ensuring public confidence in the vehicle and company’s processes.

Thankfully no. The last time we saw this dramatic of a ground-based spacecraft failure was during the Apollo 1 fire in 1967, which cost three human lives. Fortunately, no one was harmed during Saturday’s accident, which speaks well of SpaceX’s safety practices during such dynamic tests. Had humans been injured or killed, it would have undoubtedly complicated the already complex road ahead for SpaceX.

What does this mean for commercial crew flights?

NASA provided multibillion-dollar contracts to SpaceX and Boeing in 2014, with the intent of bringing their Dragon and Starliner vehicles into service for getting U.S. astronauts to the space station. Before this accident, SpaceX and NASA had been targeting early October for the first crewed Dragon mission to the station. Now, that will almost certainly be delayed by at least several months, into 2020. Before Saturday, Boeing’s Starliner spacecraft was behind Dragon in terms of development, and is also unlikely to fly humans before early 2020.

NASA recently signed a deal with Russia to purchase two additional Soyuz seats, for one crew member each, which will ensure a US crew presence on the station through September 2020. The agency may well now be forced to return to the Russians yet again to procure more seats through the end of 2020.

What does SpaceX do now?

Undoubtedly, the company had a busy Easter weekend. The first step is to determine what happened and then work with NASA to fully understand the problem; they would then devise a fix to ensure the problem never happens again. Internally, the company’s engineers may already know what occurred.

I would also be hugging NASA were I in SpaceX management—leaning on the agency for its expertise in human spaceflight systems as well as seeking cover from political fire. After a Falcon 9 rocket launch failure in 2015, in which the CRS-7 supply mission to the International Space Station was lost, the agency stood by its commercial cargo partner. NASA human spaceflight chief William Gerstenmaier offered public support for the company, beat back congressional doubters, and helped SpaceX get back to flying quickly.

In recent years, some NASA critics have viewed the agency as “holding back” SpaceX during the development of the Crew Dragon vehicle with unnecessary paperwork and requirements. This may be partly true, but NASA is the customer, and clearly there are hazards yet to be found in the Dragon (and probably Starliner too). The fact is that NASA needs SpaceX to succeed, and so the company and the space agency are presently in a position where it’s best for everyone if they work together side by side, identify and fix the issue, and move on.

There is a precedent for this. After the Apollo 1 fire revealed multiple problems with the first version of the spacecraft, NASA worked closely with the Apollo capsule’s contractor, North America Aviation (now a part of Boeing) to accelerate design of a much safer updated capsule design. The fire occurred in January 1967, and the updated “Block II” Apollo capsule made its first spaceflight less than 21 months later. The design would go on to fly a historic succession of lunar missions.

It would be easy to write off SpaceX as a reckless company. But the reality is that this is a company moving rapidly in a lot of different directions—building the world’s largest operational rocket (Falcon Heavy), perfecting first stage reuse, launching more rockets than any other company, trying to recover payload fairings, and building an unprecedented, next-generation vehicle called Starship.

This accident should offer a clarifying moment for SpaceX and Musk that it really must get commercial crew right—and that putting humans on a Falcon 9 rocket, inside a Dragon spacecraft, raises the stakes. This is not easy. It is very hard.

There should be little doubt the company can come back from this. SpaceX has shown a propensity for responding to failures with speed and an ability to fix problems. After the CRS-7 failure in 2015, they were flying again six months later. Remarkably, the return to flight mission also was the first successful Falcon 9 landing.

After the Amos-6 launch pad failure in 2016, the company was flying again less than five months later and has had its most successful run since then. The company can get beyond this accident, but now that humans are involved it will require focus, transparency, and closely working with NASA to move on.

Gene Editing: The Path to a Male Contraceptive?

GizmoCrazed - October 16, 2017 0
(Credit: Africa Studio/Shutterstock) The search for a suitable male contraceptive has been long and mostly fruitless. Though ideas ranging from hormonal treatments to plugs inserted into...

Study: Stubborn Kids Are More Likely to Be Successful