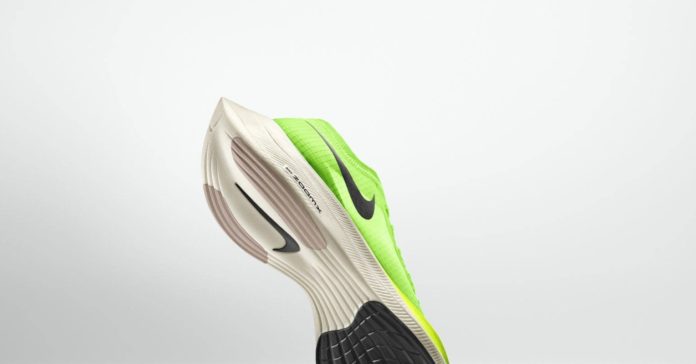 At Sunday’s London Marathon, Eliud Kipchoge, the greatest marathoner on Earth, will toe the line in what could become the most controversial shoe his sport has ever known: Nike’s ZoomX Vaporfly Next%.

Long anticipated by the sort of runner who devotes his free time to scouring Facebook groups, Instagram pages, and online message boards for news about foams, colorways, heel-toe offsets, and inventory restocks (and who is willing to part with hundreds of dollars to gain a competitive edge), the Next%, which was unveiled this week, is the successor to Nike’s Vaporfly 4%—a shoe the company claims can make runners four percent more efficient on their feet, translating to precious minutes over the course of a race like the marathon.

Since their debut in 2017, Vaporflys have become a race-day favorite among professional athletes and hobby joggers alike. (Observe the sea of red Vaporflys among the elite field at last year’s London Marathon.) They have so far avoided being banned from competitive events by the International Association of Athletics Federations, the governing body of the running world. But the Next% could change that: Nike claims the shoe saves runners even more energy than its predecessors. This week, I confirmed those claims with the researchers who performed external validation of Nike’s internal tests: The shoes, they say, provided a significant advantage over the 4%s in a controlled study.

The new Vaporfly’s superior energy-savings could translate to even faster times. But how much of an advantage will the Next%s actually provide—and will it be enough to compel the IAAF to act?

The story so far goes like this: In 2016, Nike unveiled the first version of the Vaporfly, appending “4%” to the name in reference to the energy savings they were purported to provide. The shoes represented the technological component of a three-year, multi-pronged effort to engineer a perfect marathon and break the 26.2-mile race’s elusive two-hour barrier at a race track in Monza, Italy. Eliud Kipchoge, widely regarded as the greatest marathoner of all time, headlined the attempt. He came just 25 seconds short—closer than most people thought he would.

Granted, the conditions of the race were optimized for speed—Kipchoge had a phalanx of pacers blocking the wind for the majority of the race, and he ran on a loop with zero time-sapping 90-degree turns—so it didn’t count as an official record. What’s more, it was far from clear that the shoes were the key to Kipchoge’s brush with the two-hour barrier. Yet he and many other runners, professional and otherwise, have worn some version of the shoes in each of their races since.

After Monza, Vaporflys quickly became a controversial talking point among the running set. Do they really make you faster, or are they part of a carefully orchestrated marketing stunt? Are they designed for elite runners, or can casual competitors benefit from them, as well?

The answer to all these questions appears to be yes. Peer-reviewed research has confirmed that the shoes make runners more efficient. WIRED’s in-house analysis found that runners of the 2017 New York Marathon finished faster if they were wearing Vaporflys. Last year, the New York Times analyzed nearly half a million marathon and half-marathon times logged between 2014 and 2018, and found that, even after accounting for confounding variables, runners shod in Vaporflys ran between 3 and 4 percent faster than similar runners wearing other shoes. As for the marketing bit: The $250 shoes sold so well that, for months, the only reliable way to land a pair was to buy them at a premium on the secondary shoe market.

So firmly has the Vaporfly effect anchored itself in the running community’s consciousness that last year, when the Boston Marathon subtracted five minutes from the times that athletes must run to qualify for the race, conspiratorially minded runners speculated that all the Vaporflys had something to do with it.

As for Kipchoge, he managed to clinch an official record a year after his unofficial attempt in Monza. At the 2018 Berlin Marathon, he traversed the course’s 26.2 miles in 2:01:39. It was a precedent-shattering performance. For more than half a century, improvements to the marathon world record had come in increments measured in seconds. Kipchoge crushed the previous record by a colossal one minute and 18 seconds. And he did it wearing Vaporflys.

The question you’re probably wondering: How do these shoes work?

“Our research suggests that the energy savings of the first Vaporfly came from two things, the foam in the midsole and the carbon fiber plate sandwiched inside,” says Wouter Hoogkamer, a biomechanist in the Locomotion Laboratory at the University of Colorado Boulder.

An expert in the energetics of running, Hoogkamer was the first author on the peer-reviewed study Nike used to claim the OG Vaporfly could improve running economy by four percent. What that study couldn’t tell him and his colleagues was where the energy savings came from. So they designed a followup study to begin teasing apart where those precious percentage points originate.

Their results showed that the foam in the midsole (Nike calls it ZoomX, but foam nerds know it as Pebax) is uncommonly compliant and resilient. Translation: It’s squishy and springy, respectively. Those properties enable the foam to absorb the energy a runner applies when their feet meet pavement and return a portion of it to their stride… somehow. How it works, exactly, remains unclear. The researchers originally hypothesized the foam would save runners energy by reducing bending at their knees, but that turned out not to be the case. “But the foam, mechanically speaking, is a big player in whatever’s going on,” Hoogkamer says.

Their results also showed that the carbon fiber plate plays a role—but not in the way many people think. When the Vaporfly was first unveiled, critics of the shoe speculated that the plate acted like a spring. But Hoogkamer’s findings suggest the plate’s spring function is negligible. What the plate does do is improves runners’ ankle mechanics by stabilizing the joint and reducing the load on the calves. At the same time, its stiffness helps keep runners’ toes nice and straight, allowing them to preserve the energy they would otherwise spend flexing them.

If keeping your toes straight sounds to you like it would provide pretty meager energy benefits, Hoogkamer agrees. “Physiologically speaking, I have a hard time believing that eliminating toe flexion saves you much,” he says. “My current thinking is that the foam and plate are working in concert, but that the foam is doing more work than the plate.”

And reader, you won’t believe this, but the Next%’s midsole contains 15 percent more foam than its predecessor.

Speaking of foam: Here’s where things get squishy. The first time Nike asked Hoogkamer and his colleagues at the Locomotion Lab to validate their internal tests, the company agreed to let the researchers publish their findings and talk about them publicly.

“What I can say on the record is that the Vaporfly Next% provided a statistically significant improvement in running economy over the original Vaporfly 4% in our test subjects,” Hoogkamer says. “Overall, it just performed better.”

When I ask what more he can say about the study, Hoogkamer says: “Probably not much.” The number of study participants, what paces they ran at, how long they ran, the range of energy savings the researchers observed—for now, at least, those details will remain a secret.

Leaked images of the Next% showed that Nike at one point considered calling it the Vaporfly 5%. Why the change? “We had people test above and below five percent, but as we got to wider and wider audiences, it didn’t feel right to put one specific number on it,” says Elliott Heath, Nike’s product line manager for running shoes.

Heath also points out that Nike did more than add foam to the shoe. It’s got a new upper that won’t soak through with rain or sweat (a major drawback of the original Vaporfly); the heel-toe offset shrank from 11 mm to 8 mm; the sole features better traction, and borrows heavily from the design of the “elite” version of the Vaporfly that Kipchoge wore during his attempt to break the two hour barrier; and the addition of padding at the opening of the shoe helps keep the heel locked in place. The Next% even weighs exactly the same as its predecessor. About the only thing Nike didn’t mess with? “The carbon fiber plate did not change,” Heath says.

That final detail reminds me of something Hoogkamer mentioned when we talked about his earlier study on the Vaporfly’s foam-plate system. “Our biggest limitation was that we weren’t able to test the same shoe with and without a plate, or two versions with different foams,” he said. “If you really wanted to answer where those energy savings come from, you’d have to design an experiment where you add and subtract components from the overall equation.”

With the Next%, Nike has effectively designed that study themselves. The new Vaporfly might sport new materials, better traction, and an updated look, but when it came time to tune the engine of the shoe—the foam-plate system—Nike only changed one variable.

Every so often, a technology comes along that transforms the way athletes compete. In the 1970s, composite tennis racquets larger and lighter than their wooden predecessors empowered players to hit balls faster and with more spin. In 2008, Speedo introduced a full-body swimsuit that dramatically reduced the drag swimmers experienced in the water, enabling swimmers wearing the new suits at the Beijing Olympics to dominate the Summer Games and break dozens of world records.

Composite racquets were permitted to remain in use. Within a decade they had become the norm among tennis pros, forever altering the dynamics of the game. Conversely, following the Beijing Olympics, it took less than a year for the International Swimming Federation to ban full-length speedsuits from competition.

Last year, a spokesperson for the International Association of Athletics Federations told the New York Times it had yet to be persuaded that the Vaporflys should not be allowed in races. Perhaps the Next% will make a more compelling case. Especially if other shoe companies are unable to compete with products of their own, the IAAF may soon face its own decision over the future of running.

But not before Kipchoge laces up the latest pair of Vaporflys for Sunday’s race in London.

How Long It Takes Hackers to Crack Your Password

GizmoCrazed - February 11, 2011 6
A password which consists of combination of Special Characters, Numbers, Upper and Lower Case letters is more difficult to crack then a simple string...

35 Of The Funniest Autocorrect Fails Of All Time

Google attempts to get Android messaging right (again) with Chat