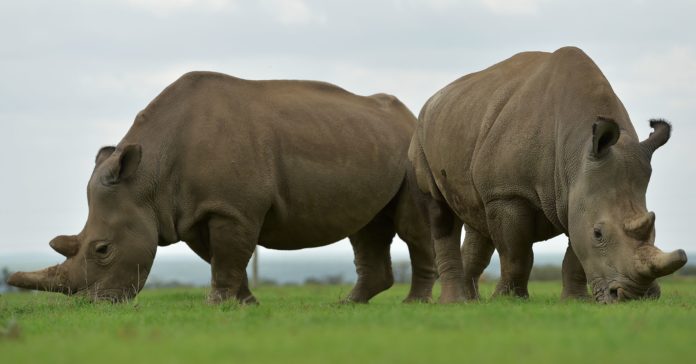 The duck is famous for two things: really liking bread (even though they’re not supposed to be eating it), and wielding insanely complicated reproductive bits. More specifically, male ducks have corkscrew-shaped penises, while females’ reproductive tracts corkscrew in the opposite direction. It’s a disturbing consequence of an evolutionary arms race, the females’ countermeasure to notoriously aggressive males.

But you know who tends to get short shrift for their own bizarrely complicated reproductive system? That would be the rhino. Specifically, a female rhino’s cervix, a long canal leading into the vagina, swerves and squiggles all over the place. “It’s composed of a number of interlocking ridges or rings that makes it look like a number of S’s connected to each other for 8 to 12 inches,” says Barbara Durrant, director of reproductive sciences at the San Diego Zoo. “It’s like Lombard Street in San Francisco, where it’s just back and forth, back and forth.”

This has suited the rhino perfectly fine over evolutionary history, but now it’s yet another detriment to the survival of its kind. Because of habitat loss and poaching, the northern white rhino in particular is nearing obliteration, extinct in the wild with just two females—who aren’t even reproductively viable—left in captivity. But now the San Diego Zoo has partnered with roboticists at UC San Diego to pursue a new solution: a snakelike robot to navigate that chaotic cervix and deposit an embryo in the uterus. If it works, it could mean the salvation of the northern white rhino. Oh, and you can help make that a reality, because it’s being crowdfunded.

The robot would be deployed on a close relative of those two remaining northern white rhino females, the southern white rhino. These animals are subspecies, so if done correctly, one could carry the embryo of the other. (One good indication of that compatibility is the two can hybridize naturally.)

The problem is that we don’t have any northern white rhino eggs, though we do have small amounts of preserved sperm. So researchers have to try to create their own eggs using a process that’s been proven in mice. The idea is to take skin cells from the surviving northern white rhinos and “realign” them by biochemically manipulating certain genes to turn back the clock, returning them to a state where they’re pluripotent, meaning they can differentiate into almost any cell type in the body.

“So we take them backwards and then we send them forward again but in a different direction, so they’re not going to become skin cells again,” says Durrant. “If we can make sperm and eggs in vitro from northern white rhino cells that are living cell lines, then we can use those to fertilize each other and make pure northern white rhino embryos.”

That’s just the start. Next the team would need to somehow get that fertilized embryo up Lombard Street into the uterus of a southern white rhino surrogate. Which is where the newfangled robot, which was originally developed for human use in procedures like colonoscopies, comes in.

“They have to navigate really tortuous and complex twisting channels,” says UCSD roboticist Michael Yip, who developed the system. “So several 180 degree turns over and over that conventional tools, anything that’s handheld or developed previously, would basically not make it past the first turn.”

“What then you can do is secure more and more tendons along the length of the device,” says Yip. “You can coordinate all those tendon motions like you’re marionetting a puppet so that you can get S shapes, and you can get torques and twists out of the system.”

An operator controls the robot’s moves by relying on a camera at the end of the device, helping the robot to navigate the maze that is the rhino cervix. To complete the journey, it would also have a delivery system to place the embryo in the uterus. (The robot could also in the nearer term deliver sperm, as opposed to an embryo, to artificially inseminate other rhino species.)

By this point you’re probably wondering: Well, we have a good idea why ducks have such goofy reproductive systems, but why rhinos? “The only thing I can think really, and it’s pure speculation,” says Durrant, “is because the fetus and placenta of a rhino are so large, and there’s so much fluid, that the cervix has to be large and muscular and complicated to make sure that that fetus stays in the uterus.” There is, after all, a condition in human women called incompetent cervix, in which weak cervical tissue leads to miscarriage. But then again, elephants have massive fetuses too, and their reproductive systems aren’t so complex.

Regardless, the mission here isn’t to decode the evolutionary reproductive history of the rhino, but to save the rhino. “Our end goal is to produce a self-sustaining population of northern white rhinos, first in captivity and then back into their natural habitat in Africa,” says Durrant. “This is not a one-off kind of scientific endeavor—this is a true conservation effort.”

Accordingly, the northern white rhino is going to need a whole lot more help other than from clever robots. It’s going to need an end to the poaching that has nearly obliterated its kind. “It’s not just the science,” Durrant. “It’s how we can use science to get them back to a conserved and preserved and restored habitat.” All this fancy science to nurture the rhino population is for naught if humans put the creatures right back in peril.

Microsoft Announces Kinect For Windows – Is This The Future Of...