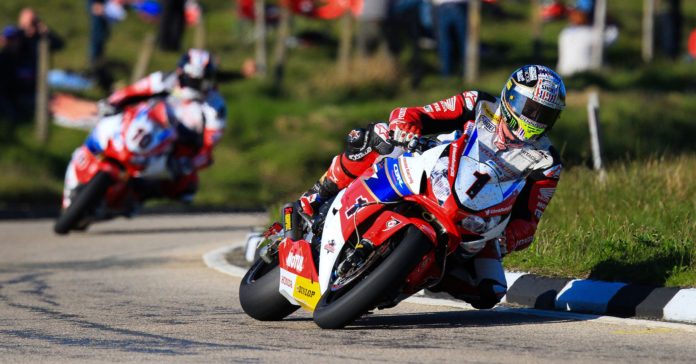 The International Isle of Man TT is a crazy motorcycle race. I mean—it’s seriously ludicrous. They ride on public roads (yes, they are closed to normal traffic) such that you get these videos of bikes going at stupid fast speed (that’s a technical term) as they zoom past these old stone walls on the side of the road. Oh, and the spectators are right there too. That’s how you get an epic video like you see above.

You could imagine the first thing I think of with a video like this would be something about velocity. Nope. It’s about sound. Just listen to those motorcycles as they fly by the camera. It’s the classic sound of the Doppler effect. You know what it is—it’s that NEEEEEEEEE-RAAAAWWW sound (it works better when you say it out loud). A high pitch as the object is approaching the observer followed by a lower pitch as the vehicle is moving away.

I guess the first thing to start with is the nature of sound. What is sound? Sound is a wave. It’s a wave in which air (usually air) is displaced in a compression. This compression of air is caused by some physical source (like the membrane of a speaker). The air compression then travels along at—wait for it—the speed of sound. In air, this is about 343 meters per second (or 767 mph).

You can actually simulate a sound wave with a slinky. Stretch it out horizontally and grab a bunch of coils and let them go. This is just like a compression wave in air, in that the air only moves back and forth but the wave (the compression) travels along the slinky. Oh, this is a slow-motion gif.

There is one problem with the above slinky model of sound. It only shows one compression that moves along. When you hear sound, it has pitch (high or low), and this is due to multiple repeating compressions. This pitch is actually the frequency of the wave. It tells you how many of these compressions hit your ear every second. Humans can hear frequencies from about 20 Hz to 20,000 Hz (where hertz measures the number of cycles per second). If you imagine these repeating compressions are spread out, you could also measure the distance between them. We call this the wavelength.

Ok, that’s enough about sound (for now). What about the Doppler effect? Let’s imagine that there is a sound source (maybe it’s a motorcycle engine at a constant rpm). This engine is sending out sound at a constant frequency. Let me represent the sound-wave compressions as a bunch of tiny balls—but sound is NOT a bunch of tiny balls. Now I can make a Python model to show what this would look like. Here it is.

Just to be clear, the cyan colored ball is the sound source and the yellow ball is a person. Other than that, everything is fairly normal.

But what if the source is moving to the left? Here’s what that looks like. Yes, this one is actual Python code. If you want to look at the code and change stuff (you should), just click the pencil icon.

In this case, the fake speed of sound is 7 m/s and the object is moving at 3 m/s. Notice how the balls look “bunched up” on the left side of the sound source but spread out on the right side? Since the balls travel at a constant speed (the speed of sound balls), then by the time the sound source makes another ball, it has moved over to the left a little bit. This decreases the distance between balls and increases the frequency with which they hit the human.

On the right side of the moving sound source, the opposite happens. The source has moved over to the left in between sound balls. This increases the distance between balls and decreases the frequency on the back side. So, from this animation you can actually SEE the Doppler effect. Oh, even better than seeing is playing. If you look at the code, you can change both the speed of the source and the speed of sound. You can even change the frequency of the sound.

What about a graph? Here is a plot of the apparent ball frequency for a source moving at 4 m/s with the ball sound speed of 10 m/s.

Yes, the frequency jumps around a little bit as the source is approaching because of the way it’s calculated. But it’s mostly constant with a value of around 6.7 Hz. Once the source passes the human and is moving away, the apparent frequency is around 2.9 Hz. The difference in frequencies depends on the speed of source. If the observer is at rest, then the following is true.

But wait! There’s more. This Doppler effect also works with light. With light, the frequency doesn’t correspond to pitch (since you can’t hear light) but rather to color. That means that an object moving towards you appears to be a color that is a higher frequency than if it was moving away from you. We call the change in color blue-shift for objects moving towards and red-shift for objects moving away. Oh, you won’t really notice the Doppler Shift with light unless the source is moving SUPER fast since the speed of light is around 3 x 108 m/s.

Yes, the Doppler effect is also used in Doppler radar. This uses the change in frequency for reflected radar waves to determine the speed of an object. That speeding object could be a car (with a police radar gun) or a weather system. OK, it’s true that cars and weather systems don’t move at speed near the speed of light. But if you look at tiny changes in the radar frequency, you can still get the object speed. But still, the Doppler effect is pretty useful.

What Soldiers Look Like Before, During And After War [PHOTOS]

GizmoCrazed - December 18, 2011 19
Wars take their toll on every single being who is one way or the other into it somehow. Well the biggest is faced by...

A SpaceX Booster Went for a Swim and Came Back as...