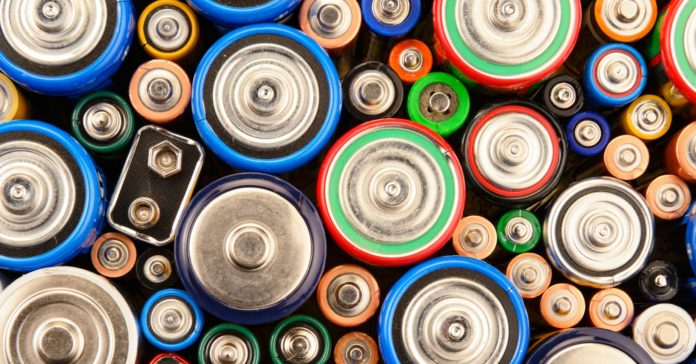 Alkaline batteries (and others) are useful because they store energy. You could use this energy to power a robot or maybe even a radio. Chances are that whatever you might want to do, a battery might be useful. But what if you want to heat up some water? A battery can be used here too.

That’s exactly what I’m going to do. I am going to make the simplest water heater using a battery and a wire. This will heat up some water. With that, I can measure the change in temperature of the water to calculate the change in thermal energy and compare that to the energy produced by the battery. It’s not a perfect experiment, but it’s going to be fun.

Before looking at the actual battery and stuff, I should go over the important physics. First, power. Power is the rate at which energy is used (or the rate you do work). So, it’s the change in energy divided by the change in time.

If the change in energy (ΔE) is measured in Joules and the time interval (Δt) is in seconds, then the power (P) would be in units of Watts. If you pick a textbook off the ground and put it on a table over an interval of 5 seconds, that would be a power of about 2 Watts.

In this expression, m is the mass of the water (in grams) and C is the specific heat capacity in Joules per gram per degree Celsius. Don’t confuse this ΔT with the time interval. The capital T stands for temperature. The last part of this energy calculation is the decrease in energy in the battery. You can’t really measure the actual battery energy—instead you have to calculate it. If you find both the electric current and the voltage across the battery, you can find the power.

Now for an actual experiment. I have a D cell battery connected to a short length of nichrome wire (the same stuff as the heating element in your electric toaster). The heating wire sits in a styrofoam cup with 40 grams of water in it—also, an aluminum foil cover just to cut down on the evaporation. Here’s what it looks like.

In order to keep track of the water temperature, there is a temperature sensor in the cup. For the electrical power side of things, I have both an ammeter (to measure the current) and a voltage probe for the battery (both of these are digitally recorded). Using 40 grams of water and collecting data for about 250 minutes, I get the following data for the temperature of the water.

It’s true that the water didn’t get that hot—but it did indeed increase in temperature. From this data you can see a temperature change of 2.1 degrees Celsius. Notice also that the rate of temperature change is the greatest during the first hour. As time goes on, the battery starts to “die” and its voltage decreases such that it has a lower power output.

Now let’s jump over to the electrical side. Here is a plot of both the voltage and the current from this battery over the same time interval that the water is being heated.

Notice that the current is fairly constant (around 0.36 amps). However, the voltage does indeed decrease from around 1.35 volts to about 1.15 volts. This is what happens to alkaline batteries when they get used. In fact, measuring the voltage is a good method to estimate how much energy is left in the battery (but we can look at that later).

Since the time data was recorded in units of minutes, I get the total energy as 115.5 Watt*minutes. Converting this to Joules, I get 6,930 Joules. Woah! This is very different from the energy calculated from the change in temperature. What the heck went wrong? Here is my guess—there was some energy “lost.” Oh, it wasn’t really lost. That just means that there were some other things that increased in energy that weren’t accounted for in the calculation. I suspect that since the water took so long to heat up, the hot (OK, just warm) water had a thermal interaction with the surroundings. If I was able to also measure the temperature changes of the table, the cup, the air, and other stuff (even the battery got hotter), then the total change in energy should be close to the integration of the power. That’s just my guess.

How about one more calculation. If all of the energy from the battery went into an increase in thermal energy of the water, how hot would it get? See if you can work this one out.

GizmoCrazed - May 19, 2013 0
The Samsung Galaxy S 4 is the latest and greatest Samsung technology, so you want to protect it! How cool would it be to...

The Nobel Prizes in Chemistry and Physics Awarded

“Check In” Is the Least Popular Activity Among Smartphone Users [STUDY]