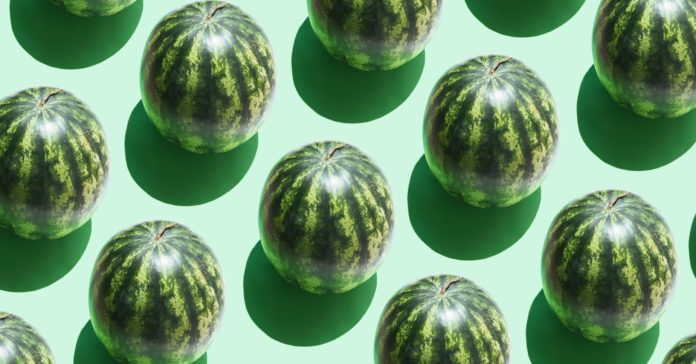 It’s easier to follow the rules when you understand why they’re there in the first place. In this case, the rule is “Wear your hard hat, fool.” On a construction site, you are supposed to wear a hard hat just in case something falls on you. In the video above, you can see what happens when a one-pound nut and bolt fall 20 feet, and then 30 feet, onto a watermelon with a face drawn on it to resemble a head. The head is then protected with a hard hat. Maybe you can learn a lesson here.

Let’s go through the physics of this situation. The video claims that the one-pound piece will have an impact force of about 2,000 pounds when it collides after falling 20 feet. I’ll be honest, I am skeptical. It’s really difficult to calculate the impact force for a couple of reasons. First, the impact force is typically not just one constant value—instead, it changes over the short time interval during the collision. Second, the impact force depends on the stopping distance. If the bolt hit a hard surface and stopped in a super short period of time, the impact force would be much larger than if it hit a soft surface (soft like a watermelon head). Sometimes it’s just easier to consider the force over some impact distance. But still, a shorter impact distance means a shorter impact time.

Let’s do it. How do you estimate the impact force? The falling bolt problem doesn’t really depend on the time of the fall. (Well, we just don’t really care about it.) If we focus on the falling distance and the stopping distance, this problem is a perfect situation in which to use the work-energy principle.

What is the work-energy principle? It basically says that the work done on a system is equal to the change in energy of the system. Work is the product of force and distance. (That’s the simple version.) If a force is pushing in the same direction as the motion, it’s positive work. If the force acts against the motion, it’s negative work. Work and energy are both measured in units of Joules.

Now, for energy. If we consider the system of the bolt plus the Earth plus the melon-head, then there are really two types of energy. There is the kinetic energy (K) of the bolt. This depends on both the mass and the speed of the bolt.

As the bolt falls and speeds up it increases in kinetic energy. But where does this energy come from? That’s where the gravitational potential energy (U) comes into play. This is an energy that depends on the gravitational field due to the Earth, the mass of the bolt and the distance between the two objects. Since we are really only dealing with changes in energy, I can temporarily call the level of the ground a distance of zero. Yes, this is wrong—but everything will work out in the end.

In this expression, m still represents mass, y is some arbitrary height, and g is the local gravitational field (around 9.8 Newtons per kilogram). OK, let’s put this all together. Here is a diagram that shows the bolt both during the fall and during the collision with the melon head (not to scale):

There’s a lot to go over in this diagram. Here are some comments:

Now let’s put this all together in the work-energy equation. It looks like this:

Now, I just need to solve for the impact force.

That’s it. I just need to put in my values from the video. The mass of the bolt is 0.454 kg, and I estimated the impact distance (rough guess). This puts the impact force (average force) at 1,073 Newtons or 241 pounds. This is quite a bit lower than the video’s claim of 2,000 pounds. To get an average impact force that high, the bolt would have to stop in a much shorter distance.

OK, but what about dropping it from 30 feet (9.14 meters)? Yes, the bolt will be traveling faster when it hits the melon. However, it will still stop and have a total change in kinetic energy of zero Joules. The real question will be: How far does it penetrate the melon? If it stopped in the same distance as before, then yes—it would have a higher impact force. Here is my calculation (in Python so you can change the values), where I get an average impact force of 1,605 N (361 pounds).

In fact, if you drop the bolt from 30 feet instead of 20 feet and the bolt goes all the way through the watermelon, it would probably have a lower impact force than when it just hit the top of the melon from 20 feet. Honestly, I have no idea where they are getting their values for this video. (They probably need a good science consultant.) Also, the video shows the impact increasing as the bolt falls—that doesn’t make any sense either.

So why does the higher dropped bolt smash through the watermelon? If I had to guess (and I do), I would assume that the melon exerts a fairly constant impact force. Since the bolt is dropped from a higher position, the melon needs to apply the stopping force over a larger distance to stop it. This is why it breaks. If the bolt penetrates far enough into the melon, it will pass from the rigid rind (the crust) into the soft gooey parts. This disrupts the structural integrity of the melon and it falls apart.

One last thing, from the perspective of a science consultant (since I do this stuff from time to time): What is the purpose of this video? Is it to show that if you don’t wear a hard hat bad things can happen? If that’s the case, the busted watermelon does a nice job of getting the point across. But if that is the goal of the video, you don’t really need the “impact force” numbers—just leave them off. If the goal is to teach people the physics of impacts, then you better fix those numbers.

You might say that the physics here is complicated. It’s really tough to get everything right. Yes, I agree. But my number one rule for science communication: You can’t be 100 percent correct, but you can be 100 percent wrong. I think in this case, these numbers are just plain wrong.