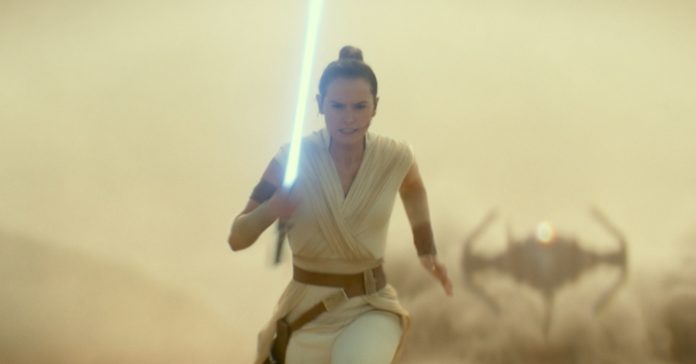 What the heck does “The Rise of Skywalker” even mean? Some people hate trailers because they spoil the plot. For me, it’s more like an appetizer to get me ready for the show. Of course, in this case I’m talking about Star Wars IX: The Rise of Skywalker.

Since you know I’m a huge geek for both Star Wars and physics, I have to do some type of analysis on this trailer. That’s just what I do. How about a look at Rey’s backflip over a low-flying TIE fighter?

My weapon of choice in this post will be video analysis (using Tracker Video Analysis). The idea is to look at the x- and y-position (in units of pixels) of an object in each frame of the video. With this, I can get position and time data to do whatever analysis I want.

For Rey jumping over (I assume she makes it) a TIE fighter, I’m just going to look at her vertical motion. Once she leaves the ground, it would just be normal physics projectile motion with a vertical acceleration equal to the local gravitational field for that planet. These kinds of analysis come up quite often—and there are three things you could consider.

If you know two of these three things, you can find the third. Here you can see there is a problem. I’m pretty sure I can get a distance scale by using the height of Rey (or the size of the TIE fighter). But what about the other two? It seems I should stay away from the time scale. The trailer shows her acrobatic leap in slow motion (apparently for effect). But since it’s in slow motion, the viewed frame rate (what the user sees) is different than the “real” rate. Yes, I know Star Wars is not real.

I only have one hope. One last hope. I am going to have to assume the vertical acceleration is equal to -9.8 m/s2 just like on Earth. It’s not a crazy assumption. First, all the motions of people look like they would on Earth. Second, most of this movie was probably filmed on Earth. I think it’s a safe assumption.

Now for the analysis. I’m going to look at the vertical position of Rey in each frame. For this clip, I also need to adjust for the motion of the camera. We can compensate for this camera motion by looking at the apparent motion of the background. Actually, Tracker Video Analysis has some nice tools to take care of this (with a little bit of work).

Let’s start with a plot of Rey’s vertical position as a function of “time”—remember, it’s not real time.

This is strange. Strange that a person is jumping over a flying spacecraft on an alien planet? No. It’s strange that her vertical velocity is essentially two constant segments. Here is what it would look like with a human jumping up (same height) on the surface of the Earth. Note: This is a calculation in python. You can see the code by clicking the pencil icon.

Yes, this curve is the shape of a parabola. The data from the clip IS NOT a parabola. Don’t worry, it’s OK. Maybe Rey is using The Force or something to make this jump (she probably is). But there is still some useful stuff here. First, she jumps at least 2 meters high—that’s the change in height of her center of mass. That’s an impressive jump. Second, if this jump was on Earth, moving up that high would take at least 0.5 seconds. In the clip, the motion takes 1.9 seconds. Right off the bat, you could estimate that this is slowed down by a factor of 4 (approximately).

How about we jump to the analysis of the horizontal motion? Oh, maybe I should point out something odd about this scene. There is some type of TIE fighter zooming toward Rey. You would think her goal is to jump over the spacecraft, but who really knows. Here is the weird part—she starts off running in the same direction as the TIE fighter. Even though she runs fairly slowly compared to a spacecraft, this will decrease the relative velocity between her and the ship (since they are running in the same direction). Now, when she jumps over the TIE, it will take longer for it to pass under her. This means she would need to jump even higher to clear it and stay in the air longer. You know what I’m talking about. You’ve seen these epic videos of people jumping over speeding sports cars. They run toward the car, not away. But maybe she is trying to land on top of the TIE fighter. Like I said, who knows.

OK, here is a plot of her horizontal position during this time.

Let me end with some preemptive comments. I know your questions and comments before you even ask them.

GizmoCrazed - December 5, 2016 0
A professor of biomedical engineering at the University of Southern California, Theodore Berger, is working to bring to market human memory enhancement in the...

Space Photos of the Week: Shooting Stars and Dwarf Galaxies