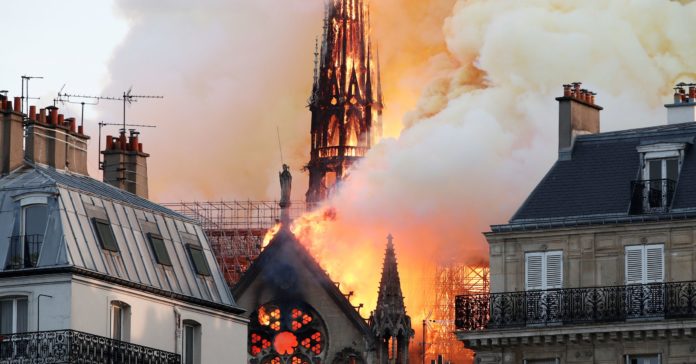 Some of the wood that burned in the cathedral of Notre Dame in Paris on Monday was put in place in the year 1160. The beams and exterior of the roof over the nave, the long main section of the building, date from between 1220 and 1240. Nearly a millennium ago it was forest; today, after a catastrophe that cuts to the heart of French culture and human history, it’s ash.

“It was one of the oldest—until today—surviving roofs of that kind,” says Robert Bork, an architectural historian at the University of Iowa. “It’s incomparable.”

The fire began Monday evening, around 6:30 pm, in the church’s attic. The building’s familiar towers and flying buttresses loomed over the Ile de la Cité for centuries, prompting the author Victor Hugo to locate Notre Dame not only at the literal center of the city of Paris but also at its historical center, as a symbol. Flames and a column of smoke made it even more striking, and as the flames spread the potential impact of the blaze became more clear. President Emmanuel Macron canceled a speech. Four hundred firefighters mustered. The cathedral’s lead-and-wood spire, built by Eugène-Emmanuel Viollet-le-Duc in 1860 as part of a controversial remodel, caught fire and fell.

By Monday night, the art and treasured objects kept in the cathedral had been saved, it seemed. But architectural historians around the world were emailing each other frantically: If the lower three-quarters of the building resist, if the stone walls stand, it’ll be possible to imagine restoring Notre Dame. “If the fire burns out while the stone vaults are intact, then the repair is a repair,” Bork says. “If the vaults start to crack and fall down, then the building is going to be lost. We’d be talking about rebuilding, not a repair.”

Parisian fire brigades held the line. They kept the fire from spreading into the towers of the western face of the cathedral. The wood—itself an architectural treasure—was lost. “Cathedrals like Chartres had all burned off,” Bork says. “This was quite special, and it was from the time that they were really developing roof techniques.” But the rest of the building seems to have been spared.

As a landmark, Notre Dame lives on in uncountable drawings, paintings, and photographs, not to mention the memories of people who visited, worshipped, and listened to music amid its incomparable acoustics. But because it survived largely intact into the digital era, Notre Dame lives on in the virtual world, too—and that may make its restoration all the more complete. For the last half-decade or so, an architectural historian named Andrew Tallon worked with laser scanners to capture the entirety of the cathedral’s interior and exterior in meticulous 3D point clouds. His billion points of light revealed a living structure; the magnificent flying buttresses had indeed held the walls true, but the Gallery of Kings, statues on the western facade, were a foot out of plumb, Tallon told National Geographic in 2015.

Just as it had in Victor Hugo’s day, the entire building had in fact fallen into disrepair by then. In 2017, the problems became too serious to ignore. The New York Times reported on stacks of masonry, fallen or removed, in the gardens. Gargoyles had given way to plastic pipes to drain away rainwater. A remodel was imperative, though as Time reported, it wasn’t clear who would pay for it. This is the renovation project that was underway when the fire started, and architects now hope that Tallon’s scans may provide a map for keeping on track whatever rebuilding will have to take place.

Tallon died late last year, and his mentor, a pioneer in using modern engineering forensics in historic architecture named Robert Mark, died in early 2019. “Both of them loved this building,” Bork says. “I’m just glad they didn’t have to see this.”

As for what happens next, no one seems sure yet. In a statement, Macron insisted the cathedral would be rebuilt. And even if France finds the money to do so, what exactly will that entail? An exact copy, perhaps using Tallon’s scans? Something different? “This has not ever happened before in my lifetime, so I don’t have a paradigm to go to,” Bork says. “Original hand craftsmanship is irreplaceable. When you restore it, it’s not exactly the same thing. You lose information. You can tell sometimes when a stone has been carved by the kind of chisel marks on it. You can tell sometimes the chemical content of the mortar.”

That texture and detail—and the knowledge to be gained by studying it—is what a fire burns away. A new wall doesn’t contain any of that, even if it looks exactly like what once stood. “Do we clean it up and make it all look unified, or do we try to let the memory remain?” Bork asks. “Every time they have a cathedral that needs restoration and tender loving care, there’s the question of, do you make it Disneyland, or do you let it decay? In this case, God willing, the cathedral will have some of its original structure left, and they’ll put it back as best as they can.”