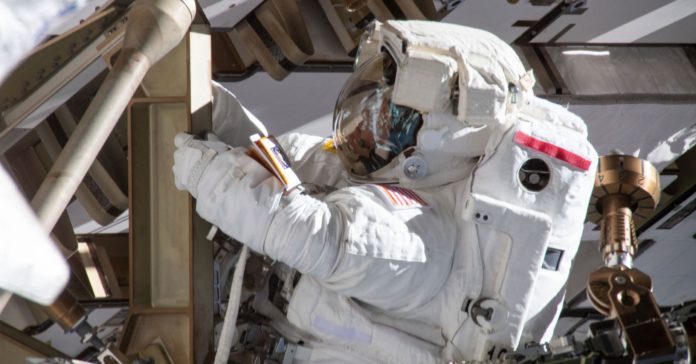 When Saralyn Mark heard the news earlier this month that NASA was planning the first all-women spacewalk at the International Space Station on March 29, she started to worry.

Mark, an endocrinologist by training, was a senior medical advisor to NASA for 18 years. In that role, she studied the way men and women’s bodies differ, on space and on earth. Within the agency, she advocated for spacesuit and technological design that took these differences to account.

She led two separate decadal reviews into how NASA handled sex and gender difference, the last of which published in 2014. Those audits taught her that women astronauts often struggled to get spacesuits to fit right. “I was very concerned,” says Mark, of what should have been exciting news. “I was concerned because of my knowledge about how spacesuits do not properly fit women, female astronauts. And with the spotlight shining on the space program and an all-female spacewalk, I wanted to be sure that the spacesuits fit properly so they could do their jobs well and safely.”

Mark no longer works at NASA. She was asked to leave the Office of the Chief Health and Medical Officer, which oversees NASA medical policy, two years ago, at the beginning of the Trump administration. So Mark waited, not knowing what was going on inside the program but hoping for the best. Her answer came Monday, just four days before the historic spacewalk with Christina Koch and Anne McClain was to take place. NASA announced that McClain would no longer participate in Friday’s walk because the second available suit on the ISS did not fit her; instead, Koch would be joined by a male astronaut, Nick Hague. (NASA said McClain is tentatively scheduled to do another walk on April 8.)

The change in plans provoked widespread outrage online. Mark said she couldn’t sleep all Monday night because she was getting pings nonstop from people across government and science who were just as dismayed as the Twitter masses. As we spoke, a government worker from a different agency texted her, “OMG I can’t believe this.”

“I was not surprised,” Mark said. But she was upset. “The good news is that no one died. No accident occurred, so it’s the right moment to highlight that the science behind it is unacceptable.”

By the science, Mark really means the lack of science, or the failure to translate science into real-world solutions. In her commentary accompanying the 2014 decadal review, Mark highlighted problems like a failure to fully enforce gender inclusion policies, lack of astronaut data segregated by sex, and a misguided belief that because the data that exists on women in space comes from such small sample sizes, it can’t be trusted. Years of not looking into or addressing the specific needs of women astronauts led up to this moment.

This problem is not unique to NASA. Women face challenges getting the right equipment in every extreme field, according to Mark. She has turned a program she developed while at NASA and in the White House Office of Science and Technology into a nonprofit iGIANT that advocates for gender-inclusive design. Since its inception in 2016, she’s hosted more than 62 roundtables with women in the military, in rescue operations like wildland firefighter crews, deep sea divers, surgeons, and astronauts, and she has heard the same refrain: the equipment doesn’t work right for me. The gear in these fields was not designed for women.

One fighter jet pilot told Mark about how her flight suit was built for men to urinate easily, but not women. On long sorties, she’s had to dehydrate herself. Female surgeons have told Mark how they’ve had to redesign medical tools to fit their hands. “It sends a very profound message,” Mark says. “Great, show up, but you’re not really that welcome. We’re tolerating your presence. And you’re so happy to be at the table that you’re tolerating the fact that you’re not actually given a seat, you’re just at the table, and you’re trying to find a way to make it work.”

This is a consequence of “the gender data gap,” writes author Caroline Criado Perez in her book Invisible Women: Data Bias in a World Designed for Men. Perez describes how a failure to take women’s bodies into account can have deadly consequences, from cancer drugs calibrated for men that then won’t work for women, to body armor that doesn’t fit female police officers’ torsos. For women in these extreme environments, she writes, “the consequences of living in a world built around male data can be deadly.”

It’s hard to imagine a situation more deadly than an astronaut walking in the vacuum of space wearing a suit that doesn’t fit. The two suits on the International Space Station that are currently calibrated for spacewalks are a size medium—the smallest size—and a size large. McClain had trained in both sizes on earth, and had indicated to NASA that she could safely use the large, according to NASA’s account. This would allow her to walk with fellow astronaut Koch, who needed the medium size. But after doing a walk last week wearing the medium size, McClain realized the large didn’t actually fit her safely in space and she needed to be in the medium.

“This decision was based on my recommendation. Leaders must make tough calls, and I am fortunate to work with a team who trusts my judgement. We must never accept a risk that can instead be mitigated. Safety of the crew and execution of the mission come first,” she tweeted from space.

There is another medium torso on the ISS, but it’s a spare, and would take time to get it ready. “For logistical efficiency, the ISS has a pantry of suit parts that can be mixed and matched as needed to accommodate a variety of crew combinations, but we do not maintain a fleet of six completely assembled suits. To change upper torsos, the complete life support and controls system must be removed in addition to the pressure garment components,” explained NASA engineer Lindsay Aitchison, who works on the spacesuit designs, in an email to WIRED. It was faster to switch astronauts for the upcoming spacewalk than spacesuits.

Even with the right size torsos, women astronauts have trouble getting the suits to fit. “The suits are big and difficult and often don’t fit women well. This can impact one’s focus while wearing the suits. Women have had to compensate. Some women use a water ski vest to help the suits fit better. Some use padding,” former astronaut Cady Coleman told a NASA roundtable on gender difference and design in 2016 organized by Mark and then NASA chief health and medical officer Richard Williams, according to minutes provided by Mark. Mark remembers Coleman saying she felt like she was floating in her suit. The minutes go on to dryly state that Coleman “emphasized that women shouldn’t need to do this.” Mark says NASA has been aware of the problem with suits not fitting women correctly for decades.

Aitchison, the current NASA engineer, told WIRED that padding is a standard part of getting spacesuits to fit regardless of gender. “The padding preference for each astronaut is kept on file and tweaked just like any other aspect of their suit as they become more experienced with spacewalking and how they prefer their suit to fit,” she wrote to WIRED. People commonly add a “0.5-inch thick pad on their back to push them forward in the torso to increase visibility of controls,” she says, as well as pads to make the gloves fit better, or the boots.

Partially this is all necessary because the suits are not custom fit anymore, as they were during the Apollo missions. “Back then a mold of your body was used,” says Mark. But those missions were limited in size; after they ended in the ‘70s, NASA’s programming changed and hundreds of astronauts joined, and the cost of custom molds at the scale was prohibitive. “Now it’s more off-the-shelf,” Mark says, “to fit the average individual, generally male.” Even so, a single suit can reportedly cost around $250 million.

NASA knows this is a problem for women and people with different body types. The agency’s Office of Inspector General pointed it out in a 2017 report on spacesuit management and development. “The Hard Upper Torso was designed in the Shuttle era to accommodate a specific range of individuals and fabricated in three sizes: medium, large, and extra-large,” the report states. “However, over the years the astronaut corps has become more diverse and includes individuals that do not conform to the historical norm. As a result, astronauts who do not fit comfortably into available suit sizes can have increased accessibility issues.”

Mostly, the individuals who do not conform to that norm are women, who have smaller upper bodies, which makes getting their arms into the suit very difficult, says University of Florida space historian Amy Foster, whose book Integrating Women Into the Astronaut Corps tells the story of NASA’s first six female astronauts. Like Mark, Foster sees the extra effort women have to take to retrofit their gear as emblematic of the larger issues of women breaking into any field designed for men—from academia, where she works, to microgravity.

Even knowing NASA’s history of accommodating women’s bodies, Foster was elated when she heard the announcement that there would be an all-female spacewalk. It was about time. “I assumed that if they were announcing it, they had checked that they had the right equipment for Anne and Christina,” she said.

On the one hand, it shows that NASA is proud of the fact that there were two women in space at the same time who are both capable of doing spacewalks. Of the 217 astronauts who have ever done spacewalks, only 13 have been women. On Friday, Koch will be the 14th. But on the other hand, the failure to have the right equipment for McClain highlights that good intentions are not enough. And neither are numbers.

“You know, we get proud that the astronaut class selected 40 percent women, 50 percent women. We see it as a sign of equity,” Mark says, but it’s also not enough. “To me a sign of equity is to be given the tools and resources and opportunities to do your job well and safely. Everyone deserves that.”

When you buy something using the retail links in our stories, we may earn a small affiliate commission. Read more about how this works.