SpaceX Lands All 3 Boosters of Its Falcon Heavy Rocket 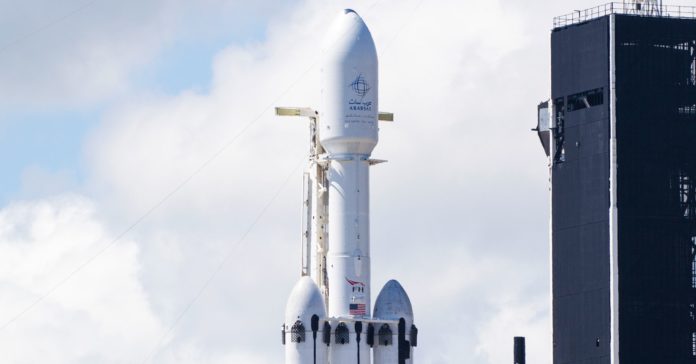 The Falcon Heavy rocket is many things, but “timely” is not one of them. Delay after delay have plagued its development. And this week, the same fate befell its launch schedule. Originally planned to liftoff last Sunday, the Falcon Heavy’s first commercial launch was thrice delayed due to unfavorable weather conditions before it finally left launchpad 39-A at Kennedy Space Center today.

The wait was worth it. The minute the launch window opened on Thursday, the rocket boosted its payload, a Saudi Arabian telecommunications satellite, toward geostationary orbit. Even from across several miles of water, the power of 5 million pounds of thrust was enough to rattle your ribcage. One nearly had to shout to be heard over the roar of the 27 Merlin engines as the rocket departed the launchpad, but few felt the need to say anything. Instead, most of the reporters I was with on the causeway cast their eyes to the sky, tracking the rocket between breaks in the low-hanging clouds as it boosted a 13,000 pound satellite thousands of miles above the Earth.

Less than eight minutes after launch, the rocket’s two side boosters appeared overhead, looking like two building-sized candlesticks in the twilight sky. As the rockets executed their final burn to perform a nearly simultaneous landing, two sonic booms ripped through the otherwise peaceful Florida night. Everyone on the causeway erupted in cheers after it was clear that both boosters had successfully landed, the tops of which could just be seen over the trees. Only a few minutes later, the center core attempted a landing on Of Course I Still Love You, a drone ship parked in the Atlantic Ocean 600 miles from the launchpad.

A handful of spectators were listening to a radio broadcast from the launch command center, waiting to hear the fate of the center core. The two minutes between the side boosters landing and the center core’s attempt were tense. During the Falcon Heavy’s demo flight last year, the center core landed in the water and the resulting explosion damaged the drone ship. The botched landing was due to insufficient fuel to light some of the engines, CEO Elon Musk later revealed, but he said “the fix is pretty obvious.”

Whatever obvious fix Musk and the SpaceX crew employed this time around clearly worked. The center core nailed its landing on the drone ship and once word made its way from SpaceX command center, the journalists and photographers assembled on the NASA causeway went absolutely wild. Only a few years ago, the idea of landing a rocket booster was unthinkable. And now, SpaceX had just aced a landing by three boosters from the same rocket.

The company’s success was not guaranteed. Musk had warned his followers that SpaceX was being “extra cautious” ahead of the Falcon Heavy’s first commercial flight to give engineers the time to make sure it would go off without a hitch. The caution is understandable. Although the Falcon Heavy had flown a demo mission once before, this rocket used new block 5 boosters, which are seven percent more powerful than the ones used for the demo flight. “First flight for Falcon Heavy Block 5 means there is some risk of failure between 5% to 10% imo,” Musk had tweeted. “Many good design improvements from Falcon Heavy demo, but the changes are unproven.”

The success of the Falcon Heavy’s first commercial flight is good news for the Air Force. The next flight of the Falcon Heavy will be an Air Force rideshare mission that is expected to occur no earlier than mid-June. That launch will use the two side boosters that landed at Kennedy today to boost 25 satellites built by organizations including Georgia Tech, the Planetary Society, and NASA.

Musk has long said that he will consider SpaceX successful when landing rockets becomes boring. But after watching the world’s most powerful operational rocket go to orbit and then return each of its three first-stage boosters to Earth, I can’t help but think that SpaceX will never be successful—at least not by Musk’s metrics. The nearly simultaneous landing of the two side boosters is the most futuristic thing I have ever seen. In fact, one of the only things I can imagine that is more extraordinary than this feat of engineering would be treating it as mundane.