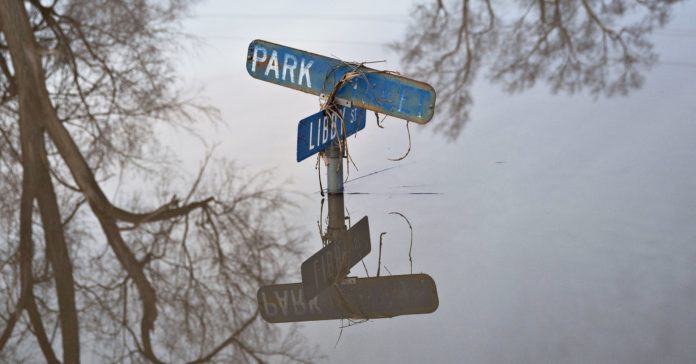 With sea levels expected to rise at least 26 inches by the end of the century, due to human-driven climate change, to say that we have a problem is an understatement. By the middle of the next century, many of the world’s major cities will be flooded, and in some cases, entire island nations will be underwater. The people who live there will have to relocate. But to where?

On Wednesday, the United Nations Human Settlements Program, or UN Habitat, convened its first roundtable to discuss the possibility of floating cities as a solution to this problem. Held at its headquarters in New York City, on the banks of the East River, the location was fitting given that the room itself might be underwater within a century. The specific proposal that dozens of scientists, engineers, artists, and investors came to discuss was Oceanix City, which aspires to create a scalable platform for the seafaring civilizations of tomorrow.

Borrowing its name from the company that created it, Oceanix City is the latest seasteading venture of Marc Collins, French Polynesia’s former minister of tourism and something of a floating-cities veteran. In 2017 he also cofounded Blue Frontiers, which aims to build floating homes, offices, and hotels off the coast of his home country. Unlike Blue Frontiers, however, Collins says that Oceanix City was created with a more egalitarian spirit in mind. “No one is out to build a luxury product for the rich, ” Collins says. “That isn’t on the table.” Instead, it’s about trying to create floating cities that meet the needs of the people whose coastlines are at risk of getting swallowed up.

Oceanix City was designed by the renowned Danish architect Bjarke Ingels, along with dozens of experts from institutions like the UN and MIT. According to Ingels, who lives on a houseboat himself, residents of the floating city will use 100 percent renewable energy, eat only plant-based food, produce zero waste, and provide housing affordable to all, not just the rich. Although most cities struggle to hit even a handful of these goals, Ingels and Collins were confident that they could be accomplished in the challenging oceanic environment.

At the core of Oceanix City is a 4.5-acre hexagonal floating platform that is meant to host up to 300 people. These platforms are modular, meaning they can be linked to form larger communities as they tessellate across the surface of the ocean. Each platform will be anchored to the ocean floor using biorock, a material that is harder than concrete and can be grown using minerals found in the ocean, which could make the anchor more secure over time. These anchors might also serve as the seeds of artificial reefs to rejuvenate aquatic ecosystems around the floating city.

The exact design of each platform will be determined by the community’s needs and the city’s location, said Ingels. Some, for example, could act as barriers to limit the impact of waves, while others could be dedicated to agriculture. But every platform will play a role in keeping the floating city sustainable: by hosting aeroponic grow houses, submerged gardens for growing scallops and other seafood, or desalination equipment that would run on renewable energy. Although all the platforms are designed to withstand a category 5 storm, Collins says they will initially be placed in locations that are generally sheltered from extreme weather events.

Many of the technologies needed to bring this vision from paper to reality are still in their infancy, such as passive desalination and high-efficiency wave power generators. So Collins and Ingels are also casting the floating city as a kind of incubator for the sustainable technologies of tomorrow. Any technologies developed along the way could also be used by communities on land, just in case this whole floating-cities thing doesn’t take off.

Political hurdles also stand in the way, particularly when it comes to who, exactly, will be in charge of these floating cities. The plan for the first Oceanix City is to moor it about a mile off the coast of a major city. If one of these ocean-top communities were to get parked near New York City, for example, the floating community could be treated as a new borough, or a separate city under the jurisdiction of the state, or it might look more like Washington, DC, which didn’t have its own local government for most of its history. Those questions have all been kicked down the road, but as Victor Kisob, deputy executive director of UN Habitat, noted, they are of critical importance for the project’s success.

The idea of living on the surface of the ocean is hardly new. Various cultures around the world have lived on the water for centuries, and many—like the Uros people in Peru with their reed islands, or the Bajau tribe in Southeast Asia, who live on houseboats—continue to do so to this day. In recent years, the prospect of living on the sea has also captured the imagination of Silicon Valley venture capitalists, who see it as a way to save themselves from rising tides and pesky government oversight.

The rise of this centuries-old idea in techno-libertarian circles is due, in no small part, to the efforts of Peter Thiel. In 2008, Patri Friedman, a libertarian theorist and grandson of famed free-market economist Milton Friedman, founded the Seasteading Institute, a nonprofit dedicated to creating an autonomous floating city. Riding on a donation of $1.7 million from Thiel, the Seasteading Institute began to make plans for a colony off the coast of French Polynesia.

In 2018, the French Polynesian government reneged on its agreement and let its MOU with the Seasteading Institute and Blue Frontiers expire after facing criticism from local residents, according to a report from Radio New Zealand. Blue Frontiers’ website says the company is still negotiating with French Polynesia and is also discussing its plans with other countries, but Collins, who is no longer active in the organization, says the last he heard, the French Polynesian government was being silent on the issue. In November, only months after this blow to Blue Frontiers’ plans, Collins left the company and founded Oceanix to give floating cities another shot without the ideological baggage.

“There’s a radical change in the approach, which is why we’re doing this with the United Nations,” Collins says. “The approach is, what is it the countries are actually asking for and what are the needs—as opposed to, ‘We would like to build floating infrastructure because we have this philosophy,’ and seeing if the countries will let us in.”

For now, Oceanix City is little more than a slideshow, a slick architectural model, and an ambitious dream. But this unveiling at the UN was the first step in making it a reality. In the immediate future, Collins says, he plans to convene a 25-person “brain trust” that will regularly meet to plot the next steps for Oceanix City. This group will be faced with the tall order of bringing a futuristic floating city to fruition. As the oceans reclaim our cities, a radical rethinking of where and how we live will have to take place. Whether floating cities are the answer—or whether their proponents can muster the political and economic capital they need—is much less certain.