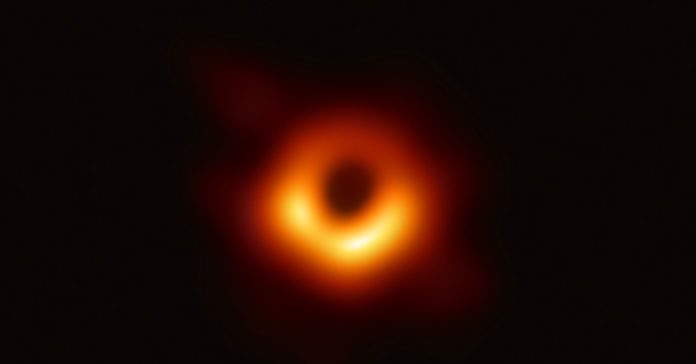 The picture, taken over 5 days of observations in April 2017 using eight telescopes around the world by a collaboration known as the Event Horizon Telescope, depicts luminous gas swirling around a supermassive black hole at the center of M87, a galaxy 54 million light years away. Past the bright lights, though, is the black hole’s telltale feature: its event horizon. The event horizon is the edge of the spacetime abyss, where gravity is so strong that no light can escape from it. “It’s the point of no return,” says Feryal Özel of the University of Arizona, who is a member of the EHT collaboration. In the image, it manifests itself as the “sudden absence of light,” she says.

Previously, researchers had captured a blobby jet of light emerging from where the M87 black hole was predicted to be—but they couldn’t definitively see the black hole because their instruments were nowhere near as sharp as EHT’s. “It’s like going from a cheap smartphone camera to a high definition IMAX cinema,” says astrophysicist Andrew Strominger of Harvard University, who was not involved in the work.

The South Pole Telescope, one of eight telescopes used to capture the first black hole image.

This black hole is about 6.5 billion times the mass of the Sun. Still, it’s tiny from a vantage point on Earth, just 50 microarcseconds wide in the sky, which makes it about as hard to see as a donut placed on the moon. It took eight different telescopes to image it. The telescopes collected observational data that was synced with the precision of a billionth of a second.

To see the black hole’s boundary between light and dark, the astrophysicists captured radio waves—light 1.3 millimeters in wavelength, invisible to the human eye—emitted by the gas swirling around the black hole. The gas emits light of all different wavelengths, including visible light, but the researchers chose this particular wavelength because it can sail through entire galaxies and even Earth’s own atmosphere without being absorbed. But they still needed good weather at all eight of their telescope sites to see the black hole. Before switching on their telescopes, they had to monitor the moisture in the air, says Özel—too much humidity would ruin their images. To minimize the chance of rain, they built the telescopes in dry regions, including the South Pole and the Atacama Desert in Chile.

M87’s black hole is relatively close to Earth, as the light coming from it was only emitted 54 million years ago—so we’re seeing it at a more mature moment in its existence. “At this point in the age of the universe, black holes have calmed down,” says Özel. “They’re basically eating gas trickling in from nearby stars.” M87’s black hole does emit bright jets of gas, but it’s still pretty dim compared to younger black holes that are further away. These younger black holes accumulate larger amounts of matter, so their swirls of luminous gas shine brighter.

To capture and interpret the first black hole image, scientists first created millions of simulations like this one.

It took two decades of work to capture the image. Part of that effort was designing, building, and hauling the hardware to various telescope sites. But they also had to anticipate what they might see by nailing down the physics of black holes as accurately as possible. Özel, who has been working on photographing a black hole since her graduate student days in 2000, says that they’ve created millions of simulations of black holes, each with different mass, spin speed, or orientation, among other things. These simulations helped inform how they designed their telescopes and where they pointed them.

But they weren’t just after a pretty picture. In the zoo of astronomical objects, black holes are among the most extreme entities to exist. A black hole, as currently understood, packs an enormous amount of mass into a single point, making it—literally—an infinitely dense object. This density creates a huge gravitational pull into its center, which no one can be peer inside. “They are the only objects in the universe that create a region of spacetime inaccessible to the rest of the universe,” says Özel. Because black holes are so extreme, researchers want to study their features to see if they are consistent with the rest of general relativity. “We all feel we have an intuitive sense of what space and time are. But Einstein told us that’s true only in situations like the ones we’re used to, where the gravitational field is very weak,” says Strominger. “When the gravitational field gets strong, there are all sorts of crazy things that happen.”

Everything they’ve observed so far about M87—its mass and the size of its event horizon—is consistent with Einstein’s theory. But future, more detailed observations could reveal unexpected features. Strominger wants to see more detailed images of a fast-spinning black hole like M87. According to theoretical calculations, if black holes spin fast enough, they form a wormhole in spacetime. Future black hole images could help confirm or refute these hypotheses. Strominger is anticipating the day when images are good enough to see a black hole with its associated wormhole. “This is really, really, weird science fiction stuff, and we’re going to be seeing it,” he says.

This image is just the beginning, says Özel. They want to pivot their telescopes toward other black holes, to amass a whole scrapbook of black hole images. They also plan to take more, better-quality pictures of this black hole to understand it in more detail. Now that they’ve finally stared into the eyes of the beast, it’s time to watch how it behaves.

GizmoCrazed - August 30, 2015 0
One often wonders if road legal cars could be solely operated on the power from the sun. A company has finally answered in the...

This Company Wants Your Fertility Data