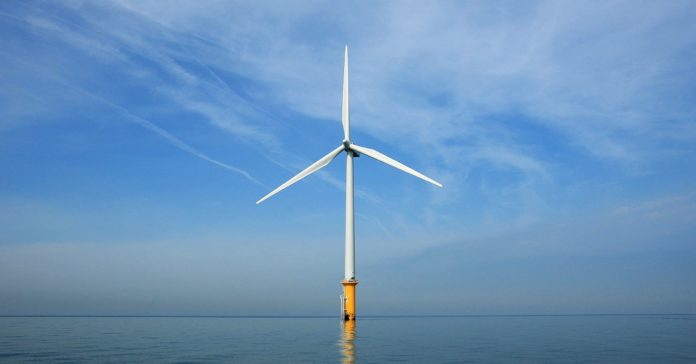 On June 1, the Pilgrim nuclear plant in Massachusetts will shut down, a victim of rising costs and a technology that is struggling to remain economically viable in the United States. But the electricity generated by the aging nuclear station soon will be replaced by another carbon-free source: a fleet of 84 offshore wind turbines rising nearly 650 feet above the ocean’s surface.

The developers of the Vineyard Wind project say their turbines—anchored about 14 miles south of Martha’s Vineyard—will generate 800 megawatts of electricity once they start spinning sometime in 2022. That’s equivalent to the output of a large coal-fired power plant and more than Pilgrim’s 640 megawatts.

“Offshore wind has arrived,” says Erich Stephens, chief development officer for Vineyard Wind, a developer based in New Bedford, Massachusetts, that is backed by Danish and Spanish wind energy firms. He explains that the costs have fallen enough to make developers take it seriously. “Not only is wind power less expensive, but you can place the turbines in deeper water, and do it less expensively than before.”

Last week, the Massachusetts Department of Public Utilities awarded Vineyard Wind a 20-year contract to provide electricity at 8.9 cents/kilowatt-hour. That’s about a third the cost of other renewables (such as Canadian hydropower), and it’s estimated that ratepayers will save $1.3 billion in energy costs over the life of the deal.

Can offshore wind pick up the slack from Pilgrim and other fading nukes? Its proponents think so, as long they can respond to concerns about potential harm to fisheries and marine life, as well as successfully connect to the existing power grid on land. Wind power is nothing new in the US, with 56,000 turbines in 41 states, Guam and Puerto Rico producing a total of 96,433 MW nationwide. But wind farms located offshore, where wind blows stead and strong, unobstructed by buildings or mountains, have yet to start cranking.

In recent years, however, the turbines have grown bigger and the towers taller, able to generate three times more power than they could five years ago. The technology needed to install them farther away from shore has improved, as well, making them more palatable to nearby communities. When it comes to wind turbines, bigger is better, says David Hattery, practice group coordinator for power at K&L Gates, a Seattle law firm that represents wind power manufacturers and developers. Bigger turbines and blades perform better under the forces generated by strong ocean winds. “Turbulence wears out bearings and gear boxes,” Hattery said. “What you don’t want offshore is a turbine that breaks down. It is very expensive to fix it.”

In the race to get big, Vineyard Wind plans to use a 9.5 MW turbine with a 174-meter diameter rotor, a giant by the standard of most wind farms. But GE last year unveiled an even bigger turbine, the 12 MW Haliade-X. When complete in 2021, each turbine will have a 220-meter wingspan (tip to tip) and be able to generate enough electricity to light 16,000 European homes. GE is building these beasts for offshore farms in Europe, where wind power now generates 14 percent of the continent’s electricity (compared to 6.5 percent in the US). “We feel that we have just the right machine at just the right time,” says John Lavelle, CEO of GE Renewable Energy’s Offshore Wind business.

US officials say there’s a lot of room for offshore wind to grow in US coastal waters, with the potential to generate more than 2,000 gigawatts of capacity, or 7,200 terawatt-hours of electricity generation per year, according to the US Department of Energy. That’s nearly double the nation’s current electricity use. Even if only 1 percent of that potential is captured, nearly 6.5 million homes could be powered by offshore wind energy.

Of course, getting these turbines built and spinning takes years of planning and dozens of federal and state permits. The federal government made things a bit easier in the past five years with new rules governing where to put the turbines. The Bureau of Ocean Energy Management (a division of the Department of Interior) now sets boundaries for offshore leases and accepts bids from commercial enterprises to develop wind farms.

The first offshore project was a 30 MW, five-turbine wind farm that went live at the end of 2016. Developed by Deepwater Wind, the installation replaced diesel generators that once serviced the resorts of Block Island, Rhode Island. Now there are 15 active proposals for wind farms along the East Coast, and others are in the works for California, Hawaii, South Carolina and New York.

By having federal planners determine where to put the turbines, developers hope to avoid the debacle that was Cape Wind. Cape Wind was proposed for Nantucket Sound, a shallow area between Nantucket, Martha’s Vineyard and Cape Cod. Developers began it with high hopes back in 2001, but pulled the plug in 2017 after years of court battles with local residents, fishermen and two powerful American families: the Kennedys and the Koch brothers, both of whom could see the turbines from their homes.

Like an extension cord that won’t reach all the way to the living room, Cape Wind’s developers were stuck in Nantucket Sound because existing undersea cables were limited in length. But new undersea transmission capability means the turbines can be located further offshore, away from beachfront homes, commercial shipping lanes or whale migration routes.

Even though cables can stretch further, somebody still has to pay to bring this electricity back on land, says Mark McGranaghan, vice president of integrated grid for the Electric Power Research Institute. McGranaghan says that in Denmark and Germany the governments pay for these connections and for the offshore electrical substations that convert the turbine’s alternating current (AC) to direct current (DC) for long-distance transmission. Here in the US, he predicts these costs will likely have to be paid by utility ratepayers or state taxpayers. “Offshore wind is totally real and we know how to do it,” McGranaghan says. “One of the things that comes up is who pays for the infrastructure to bring the power back.”

It’s not just money. Offshore wind developers must also be sensitive to neighbors who don’t like power cables coming ashore near their homes, fishermen who fear they will be shut out from fishing grounds, or environmental advocates who worry that offshore wind platform construction will damage sound-sensitive marine mammals like whales and dolphins.

Still, maybe that’s an easier job than finding a safe place to put all the radioactive waste that keeps piling up around Pilgrim and the nation’s 97 other nuclear reactors.