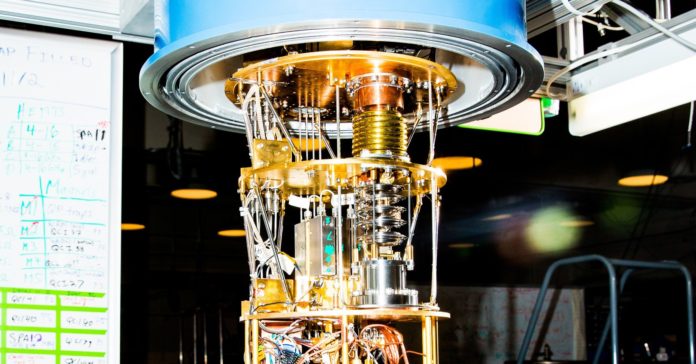 Scientists and researchers have long extolled the extraordinary potential capabilities of universal quantum computers, like simulating physical and natural processes or breaking cryptographic codes in practical time frames. Yet important developments in the technology—the ability to fabricate the necessary number of high-quality qubits (the basic units of quantum information) and gates (elementary operations between qubits)—is most likely still decades away.

However, there is a class of quantum devices—ones that currently exist—that could address otherwise intractable problems much sooner than that. These near-term quantum devices, coined Noisy Intermediate-Scale Quantum (NISQ) by Caltech professor John Preskill, are single-purpose, highly imperfect, and modestly sized.

As the name implies, NISQ devices are “noisy,” meaning that the results of calculations have errors, which in some cases can overwhelm any useful signal.

Why is a noisy, single-purpose, 50- to few-hundred-qubit quantum device exciting, and what can we do with it in the next five to 10 years? NISQs provide the near-term possibility of simulating systems that are so mathematically complex that conventional computers cannot practically be used. And chemical systems definitely fit that bill. In fact, chemistry could be a perfect fit for NISQ computation, especially because errors in molecular simulations may translate into physical features.

To understand this, it’s valuable to consider what noise is and how it occurs. Noise arises because physical and natural systems do not exist in isolation—they are part of a larger environment, which has many particles, each of which are moving in different (and unknown) directions. This randomness, when discussing chemical reactions and materials, creates thermal fluctuations. When dealing with measurement and computing, this is referred to as noise, which manifests itself as errors in calculations. NISQ devices themselves are very sensitive to their external environment, and noise is already naturally present in qubit operations. For many applications of quantum devices, such as cryptography, this noise can be a tremendous limitation and lead to unacceptable levels of error.

However, for chemistry simulations, the noise would be representative of the physical environment in which both the chemical system (e.g., a molecule) and the quantum device exist. This means that NISQ simulation of a molecule will be noisy, but this noise actually tells you something valuable about how the molecule is behaving in its natural environment.

With errors as features, we may not need to wait until qubits are hyperprecise in order to start simulating chemistry with quantum devices.

Perhaps the most immediate application for near-term quantum computers is the discovery of new materials for electronics. In practice, however, this research is often done with little or no computer-based optimization and design. This is because it is too hard to simulate these materials using classical computers (except in very idealized scenarios, such as when there is only a single electron moving in the whole material). The difficulty comes from the fact that the electrical properties of materials are governed by the laws of quantum physics, which contain equations that are extremely hard to solve. A quantum computer doesn’t have this problem—by definition the qubits already know how to follow the laws of quantum physics—and the application of NISQs to the discovery of electronic materials is an important research direction in the Narang lab.

What is special about electronic materials is that they are usually crystalline, meaning that atoms are laid out in an organized, repeating pattern. Because the material looks the same everywhere, we don’t need to keep track of all atoms, but only of a few representative ones. This means that even a computer with a modest number of qubits may be able to simulate some of these systems, opening up opportunities for highly efficient solar panels, faster computers, and more sensitive thermal cameras.

Chemical research has been going on for centuries, yet new chemistry is most typically discovered by intuition and experimentation. An application of quantum devices in which we are particularly interested at Fuzionaire is the simulation of chemical processes and catalysts, which are substances that accelerate chemical reactions in remarkable ways. Catalysts are at the heart of the entire chemical industry and are relied on each day in the production of medicines, materials, cosmetics, fragrances, fuels, and other products. Significant challenges exist, but this area is a very important opportunity for NISQ devices in the next five to 10 years.

For example, the Haber-Bosch synthesis (HB) is an industrial chemical process that turns hydrogen (H2) and nitrogen (N2) into ammonia (NH3). HB makes it possible to produce enough ammonia-based fertilizer to feed the world, but the process is energy-intensive, consuming approximately 1 to 2 percent of global energy and generating about 3 percent of total global CO2 emissions.

At the heart of the entire process is a catalyst based on iron, which is only active at high temperatures and without which the process fails. Scientists have been trying to discover new catalysts for HB that would make the chemistry more efficient, less energy-intensive, and less environmentally damaging. However, the catalyst discovery and testing process is challenging, painstaking, and costly. Despite many decades of tremendous effort by chemists and engineers, the iron catalyst discovered over 100 years ago remains the industrial state-of-the-art.

Near-term NISQ systems would be used to give chemists unprecedented insights into the inner workings of the current iron catalyst in its physical environment and would be applied to simulate novel, viable catalyst architectures, including those based on elements other than iron.

Biological systems are extraordinarily complex, which makes modeling and simulation very challenging. Prediction of biological molecules and biochemical interactions with conventional computers, especially in biologically relevant environments, becomes difficult or impossible. This forces even basic, earliest-stage biomedical research to be done by working with chemicals, cells, and animals in a lab and hoping for reproducible conditions between experiments and organisms. This is why drug discovery, a vital area of biomedical innovation that encompasses both chemistry and biology, is such a tantalizing opportunity for NISQ intervention.

Developing new medicines for cancer, neurodegenerative diseases, viruses, diabetes, and heart disease is one of the most important activities within the entire chemistry enterprise. However, the current reality is that bringing a new drug to market continues to be slow and costly, to the tune of about 10 to 15 years and more than $2 billion, by some estimates.

A central challenge within the drug discovery process is to identify a biological target that has relevance to human disease and to design molecules that could inhibit that target with the hope that this would treat the disease. Quantum devices could be used to simulate common biological targets such as kinases, G-protein-coupled receptors (GPCRs), and nuclear receptors in their dynamic environments and in complex with inhibitor molecules. These simulations would enable drug discovery scientists to identify potentially active molecules early in the process and discard non-actives from consideration. The most promising drug candidate molecules would then be synthesized and promoted to biological studies (e.g., pharmacology, toxicology) in the laboratory.

While there are great opportunities for near-term quantum devices and much hope for improved systems in the future, we must not get carried away. Research will need to solve significant challenges, including creating systems with many more qubits, improving qubit performance, and developing coding languages for quantum computers, among others.

Nevertheless, there are great reasons to be optimistic as we look forward to the next five to 10 years. Significant resources are being committed by large companies like IBM, Google, and Microsoft to quantum computing efforts; healthy investment is flowing into quantum hardware startup companies like Rigetti, D-Wave, IonQ, and others; and important academic results are being reported using current or near-term quantum devices, including solving lattice protein folding problems, predicting the optical response of exotic materials, investigating the mechanism of nitrogen fixation by nitrogenase, and many others.

As a professional chemist and physicist, we’re excited about the current capabilities and optimistic about the utility of near-term quantum devices. We’re hopeful that these systems will provide to the scientific community new insights that will accelerate discovery and help us solve problems to improve the human condition.