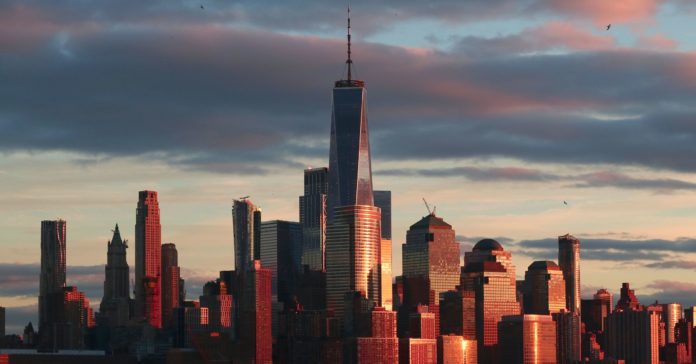 On Thursday, the New York City Council voted into law a sweeping set of rules to fight climate change, a metropolis-scaled version of a Green New Deal. And if the lawmakers and policy wonks who built the bills have their way, they’ll be a model for cities everywhere to cut carbon emissions and save the planet.

The Climate Mobilization Act, an omnibus of a half-dozen bills, takes an aggressive posture to reducing carbon emissions from America’s most populous city. Those 8.6 million people emitted 4.5 million metric tonnes of carbon in 2016; in most of the world knocking that number down would probably mean cutting emissions from cars and trucks. And this Green New (York) Deal does include more work on converting the city’s school bus fleet to electric, and on spinning up wind turbines and replacing the city’s 21 gas-fired power plants. But New York, New York, is a wonderful town; the people ride in a hole in the ground. In other words, public transit use is widespread. Well, when it’s working.

Point is, 70 percent of NYC emissions come from heating and cooling a million buildings—and a third of that carbon comes from just 50,000 buildings of 25,000 square feet or more. Blame the skyscrapers. Trump Tower is apparently a representative of the 2 percent of very, very bad emitters, for what it’s worth. So one of the new bills tells the owners of those big buildings they have to cut their emissions by 40 percent in 2030, and 80 percent by 2050. That’s a lot. “We have to pay attention. The water is speaking to us. In the last century New York Harbor is up one foot,” says John Mandyck, CEO of the Urban Green Council, which helped design the bill. “There’s no question that this bill sets tough, tough carbon limits. It’s not going to be easy. That’s a reflection of the fact that climate change is a tough issue.”

As to how those buildings get there, their owners have a few paths. They can buy green power, which is really more hopeful than realistic at this point; 70 percent of New York City’s power comes from carbon-emitting fossil fuels. But ideally this option will incentivize a market for wind turbines and hydro power, and in fact another bill in the omnibus aims to pave the way for green rooftops with solar panels. Also the building can work with the city to figure out what kinds of improvements would get emissions down—new boilers, better insulation, new windows, all kinds of new investments that would, not coincidentally, translate to thousands of construction and building-trade jobs in the city. Ey, these boilers ain’t gonna install themselves, knowwutImean?

And in an approach out of Kim Stanley Robinson’s post-climate-flood novel New York 2140 (or maybe the Crimson Permanent Assurance) individual buildings would be able to trade carbon credits. “That’s a real breakthrough policy tool. It’s never been done at this scale at a city level,” Mandyck says. “It’s a flexible tool especially for building owners that own portfolios.” So those folks could trade credits among their own buildings, or form alliances and breakaway archipelagos of skyscraping carbon trade routes.

Passing a package like this takes years of coordination and negotiation; some of this policy work dates back to Michael Bloomberg’s mayoral administration. Costa Constantinides, a councilmember leading the legislation, has been working on the issue for a decade, and the first bill requiring similar upgrades got introduced in 2017. “New Yorkers now realize the realities of climate change, which is why we’ve spent the last two years crafting sound legislation aimed at carbon,” says Constantinides, chair of the City Council’s Committee on Environmental Protection. “When passed, this will be the largest carbon emissions reduction every mandated by any city, anywhere … the first step in reimagining how we power and operate as a city.”

So what finally got the job done? Thanks to scientific and governmental reports banging the drum, and superstorms putting New York temporarily underwater, more and more people understand that climate change is an existential threat—especially in coastal cities. But that doesn’t mean every New Yorker is thrilled with the idea of capping skyscraper carbon emissions. Take, for example, the Real Estate Board of New York, which represents the owners of those skyscrapers who are going to have to pay for all these upgrades. “For a piece of legislation that purports to be the most ambitious carbon reduction bill ever passed by a city, it actually exempts more than 50 percent of New York’s built environment from its requirements,” writes John Banks, REBNY’s president, in a recent blog post. Residential buildings with rent control are exempt, as are hospitals and places of worship, and Banks’ organization insists that the long list of outs combined with the hard-line limits will discourage landlords from renting to energy-intensive but economically valuable users. The bill, Banks writes, is a “repudiation of decades of public policy designed to promote job growth and housing production to address a growing population for New York City.”

REBNY supported an earlier, slow-pitched approach based on a building’s EnergyStar rating, a measure of energy efficiency. But that went out the window—possibly because of political pressure from the left of the left thanks to Alexandria Ocasio-Cortez, who represents portions of Queens and the Bronx in Congress. Now, I could write this in a couple of different ways, and both of them would be right: One is, by fronting for a Green New Deal, Ocasio-Cortez has shined a necessary, energy-efficient light on an emergent problem that threatens New York City and the world. Another is, Ocasio-Cortez’s popularity places pressure on elected leaders whose districts overlap her own. If people voted for her, they might vote against someone whose platform included emitting more carbon. Which version is right? Eh. Embrace the “and.”

The point is, at a time when the global superpower countries seem largely uninterested in cutting greenhouse gas emissions—despite popular support for such changes—the policy weight falls on smaller political entities. That means regions, states, and cities. And what works in New York, if it works, could work in Chicago, Dallas, and Los Angeles, too. All it takes is the will.