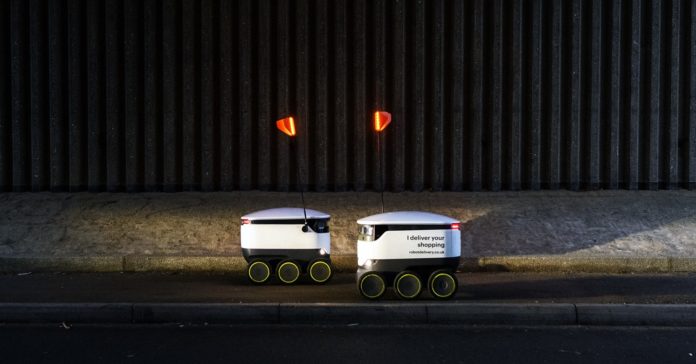 We talk a lot these days about using robots to manage the problem of the “last mile.” Say, getting a package to a doorstep from a local delivery center. Or picking up garbage from a backyard. Or delivering pizza.

The demo videos from the companies creating these kinds of robots are cool and compelling, and the business case for developing them seems strong—why rely on a human to handle the last mile of a global supply chain when cars, drones, and other small vehicles are getting so good at autonomous navigation? Especially when almost everything before the last mile is cheap and reliable: We build and maintain massive, interconnected global infrastructures for extracting materials from the natural environment (milk, tomatoes), refining them (making cheese and tomato sauce), transforming them (making millions of frozen pizzas), and even transporting them in bulk (to a national network of grocery stores). And now we’re seeing robots that promise a cheap solution to the last link in that chain—getting a single pizza to a home at the right time to the right person.

At least in the near term, these last-mile applications are a distraction. Many of them will fail. The trouble here is that robots do better in structured—that is predictable and simple—environments, and delivery is very unstructured. Part of this is the “hard” environment: things like changing weather, lighting, surfaces, sounds, and moving objects. Those of us in the Human-Robot Interaction community have known for years that navigating these kinds of jobs involves social complexity too. Humans have many changing expectations for appropriate robo-behavior, and these systems would have to accommodate both the technical and social issues—and do that very cheaply—in order to become anything but a symbolic sideshow in the global economy. We’re just not there yet, and probably won’t be for a while.

If we want to see robots create economy-scale effects in the short term, we should skip the last mile and look to what I call the last motion. These are the short task sequences between previously automated streams of work in highly structured environments, where humans currently handle various uncertainties involving physical inputs, control actions, and outputs. Like pouring plastic pellets into an injection molding machine, clearing the hopper, and closing a shield. Or pressing a few keys on the control panel for that machine, watching the display as it runs, and pressing another few keys to end the run or to initiate a cleaning sequence. Or taking freshly molded plastic parts off a conveyor, inspecting them for flaws, orienting them correctly, putting them in a box until its full, then putting that box on another conveyor.

You can easily find these last-motion scenarios in places like factories and warehouses, but they’re all over the global economy—anywhere there’s material handling in a built environment and we’ve already designed away a lot of complexity. There’s no rain, lighting’s consistent, the floor is flat, sounds are known, and we humans tend to follow rules outlined by a bit of electively installed code called a “job,” so we’re much more predictable too.

There are major technical barriers to getting systems like these to economically handle the last motion between two automated processes, but those barriers are much smaller in these structured environments. You need to inexpensively fuse diverse, high-quality, high-frequency sensor data to help robots maintain situational awareness. You need advanced software to help robots learn new tasks quickly, adjust to minor surprises, behave predictably for nearby humans, and improve task performance over time. And you need inexpensive, precise, reliable hardware so you can get a reasonable return on the investment. These are hard problems, but they are much more tractable than in outdoor delivery. And the economics are staggering. This kind of automation means turning billion-dollar workflows into complex machines that can flex to changing market demands in real time with much less direct human involvement. Boston Dynamics’ recent demonstration of a box-palletizing robot nudges us in this direction, and now they’ve acquired some image-recognition “brains” to deal with variations in package size, weight, and shape. As more and more of this lives in the realm of software, progress will accelerate rapidly. Unexpectedly.

Which gets us back to the human side of this equation. While many of us would gladly accept the increased productivity that came from automating last-motion work, our society does not seem ready for this kind of change. Less educated workers are increasingly finding themselves in these last-motion jobs, picking items out of bins, assembling electronics, moving car parts and materials from line to line, often pressing the equivalent of go and stop buttons on production equipment. And many mature workers who used to handle more complex operator jobs are finding themselves in this kind of work as the processes around them get automated. As much as we may see these jobs as dehumanizing, low-paying, or de-skilling, they are increasingly plentiful, they pay better than retail and other service jobs, and many of us depend on them to provide for our families and make ends meet. In a very real way, we have automated a lot of people into these last-motion jobs, and many of them are at the end of their proverbial rope when it comes to work, skill, and making a livable wage.

The economic and technical conditions are ripe for economy-scale automation of last-motion jobs in the relative near term. But what will happen to last-motion workers—and the fabric of our society—when we automate their jobs? Many may take last-mile work, but that will leave them with less security and skill, maybe just in time for automation to show up again. If we want a society where working hard today offers a better tomorrow, we need to do better than that.