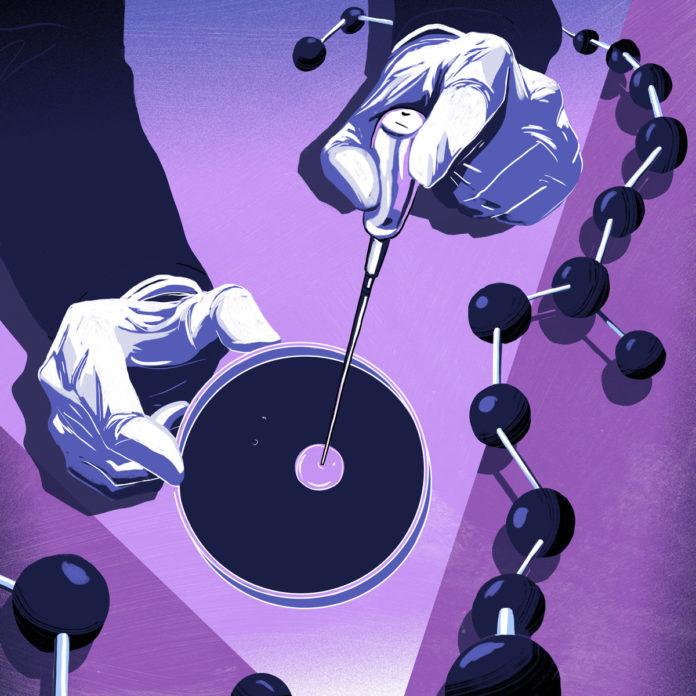 The Revolution Will Be Edited

A Focus on Repair

Some of He’s most extreme critics have called for a moratorium on similar work, but Mitalipov hopes the backlash doesn’t interfere with his team’s research.

A stall in the group’s work would mean turning away from an issue Mitalipov has felt strongly about for years. As a graduate student in clinical genetics, he recalls learning how to diagnose inherited diseases based on a patient’s genes. And he was unsatisfied with the endgame.

“You’d tell the patients, ‘Hey, we found it, this is a mutation causing this disease,’ ” he says. “And then the patient is going to say, ‘Now what?’ But that’s it, our work is done.”

It then became clear to him that one way to tackle these diseases — like cystic fibrosis, sickle cell anemia, and Huntington’s — would be to fix the genetic mutations early in life, before any damage to the gene is done. Really early: in the embryo.

But only recently has there been a clear way to do it.

The earliest work on what would become CRISPR (short for clustered regularly interspaced short palindromic repeats) happened some 30 years ago, but it took researchers nearly all that time to figure out the full CRISPR-Cas9 system and to begin harnessing it for gene editing. The system of DNA sequences occurs naturally in bacteria, helping them fight off attacking viruses. Bacteria incorporate a small chunk of DNA when they encounter a specific virus, a little souvenir to remember their viral attacker in the future. The bacteria’s defense system includes a seek-and-destroy function that uses the viral DNA as a search image. Part of the mechanism includes production of the protein Cas9, which snips the DNA that matches the template. For a virus trying to infiltrate a bacterial cell, this means game over.

Today, biologists have learned to reprogram CRISPR-Cas9 to cut any type of DNA in a cell — not just viral — in a location of their choosing by giving it a new target to seek out. They’ve also discovered that after the DNA is cut by Cas9, cells will try to repair the break in the DNA. That repair system can then be manipulated into using a template provided by scientists, effectively cutting out one gene and replacing it with another.

Mitalipov and like-minded colleagues believe the promise of CRISPR is that they will be able to use it to replace a defective gene with a functioning one. To test this, the OHSU team’s experiments, published in the journal Nature, were straightforward. Using sperm from a man carrying the defective MYBPC3 gene and eggs from a healthy woman, they would see if they could use CRISPR-Cas9 to repair the disease-causing gene.

They injected each egg with a sperm carrying the mutation and a CRISPR-Cas9 package. In this case, the package included the DNA search image that would help Cas9 find the defective gene. They also included a sequence of DNA that matched the normal version of the gene, which the cell uses as a repair template to mend the cut in its DNA. They added a little calling card to this repair template — swapping out two nucleotide bases that would change the sequence, but not the function, of the normal gene. With this, they could know whether the cell used their template.

Nextdoor is expanding to France to connect neighbors

GizmoCrazed - February 1, 2018 0
After a slow and steady expansion across the U.S., social platform Nextdoor is now launching its fourth country outside of its home country. Nextdoor...

AI and ML: Transforming the Travel Industry Now and Then