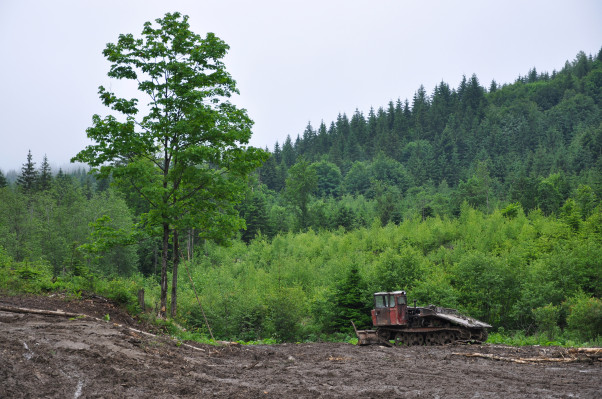 The Green New Deal brings much-needed urgency to the national conversation around the climate crisis, which is without a doubt the biggest threat to life on this planet. The recent resolution introduced into Congress by Rep. Alexandria Ocasio-Cortez and Sen. Ed Markey rightly calls for a significant overhaul of our economic system that would drastically reduce greenhouse gas emissions and pollution, alongside a Just Transition framework that would create high-quality jobs while correcting historical racial and economic injustices.

While I applaud the direction proposed in the Green New Deal resolution, it simply does not go far enough. The hard truth is that we must keep more fossil fuels in the ground. Not only that, we must redouble our efforts to keep forests standing — a critical yet oft-overlooked factor in the only promising equations to stop climate catastrophe.

There are two promising paths toward a solution: cut off the billions of dollars still flowing into fossil fuel extraction and expansion; and strengthen the rights of indigenous and frontline communities, which has consistently been proven to be one of the most efficient ways to properly manage forests and natural resources.

On October 8, 2018, the UN Intergovernmental Panel on Climate Change’s (IPCC) report was released — and it did not pull any punches. The report clearly states that if global temperatures rise by 1.5° Celsius, the impacts will be much worse than previously predicted. The report also said that to have a reasonable chance of staying under 1.5° we must immediately embark on an unprecedented global effort to reshape our economic priorities over the next 12 years. As the biggest carbon polluter in history, the U.S. largely owns this problem — therefore we must lead in the solution.

If you’re in a hole and you want to get out, stop digging.

Regrettably, recent remarks by Senator Feinstein and House Speaker Pelosi dismissing the Green New Deal show that even those often considered allies in the fight against catastrophic climate change are unwilling to marry urgency with action. “If we wait until 2050 to make change, then our Earth is going to die. We will quite literally have an apocalypse,” said 16-year-old Isha Clarke, one of the youths who confronted Sen. Feinstein asking for her support of a Green New Deal. The bottom line is that we need politicians to stand up and fight back against the corporate special interest groups that are compromising our future.

The science is clear. Emissions just from the oil, gas and coal reserves already in production would take the world well beyond 1.5° Celsius. And standing forests, particularly tropical forests, are under constant threat of destruction for profit — despite the fact that they are some of the best protection against climate change that we have (intact forests act as critical carbon sinks, keeping carbon out of our atmosphere).

If you’re in a hole and you want to get out, stop digging. We need an immediate end to the expansion of fossil fuel extraction and infrastructure and an end to deforestation. In-depth research makes clear that Wall Street banks, insurance companies and other financiers continue to pump trillions of dollars into the same companies that have been shamelessly profiting off climate destruction for decades.

The Green New Deal calls for “achiev[ing] net-zero greenhouse gas emissions” through measures that include “meeting 100 percent of the power demand in the U.S. through clean, renewable, and zero-emission energy sources” within 10 years, and restoring and protecting natural ecosystems that would remove greenhouse gases from the atmosphere, support climate resiliency, and enhance biodiversity. The resolution requires “obtaining the free, prior, and informed consent of indigenous peoples for all decisions that affect indigenous peoples and their traditional territories, honoring all treaties and agreements with indigenous peoples, and protecting and enforcing the sovereignty and land rights of indigenous peoples.” This is a solid start to this very necessary conversation.

However, “net zero” could imply a continuation of fossil fuel production and use. For example, if corporations are allowed to cancel out their emissions with wrongheaded geoengineering schemes and tradeable carbon offsets, we will be in the same hole. Without an explicit commitment to keep fossil fuels in the ground, the resolution as currently written falls short.

Achieving the goals of the Green New Deal must also go hand in hand with transforming the financial sector. Banks like JPMorgan Chase must no longer be allowed to profit from financing the construction of tar sands pipelines and the destruction of rainforests for palm oil, endangering the livelihoods of indigenous communities in its wake. They need to be held accountable for the damage done to people and the planet. And they need to rapidly shift their financing to solar and wind power; energy storage and grid modernization; electrification of transport, heating and industrial processes; and energy efficiency, which are all key technologies in achieving the goals of the Green New Deal.