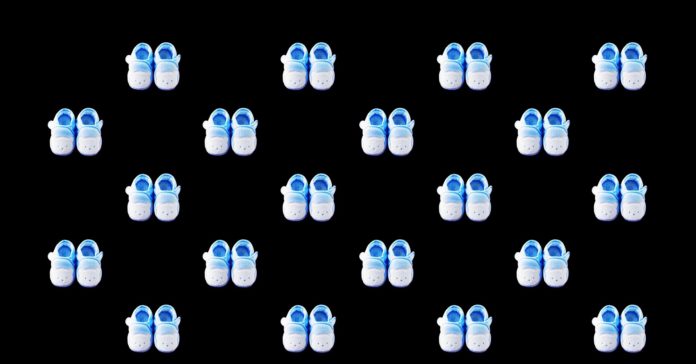 Every time a man ejaculates, he produces somewhere between 40 million and 1.2 billion sperm. About half of those tiny swimmers carry an X chromosome and about half carry a Y. So you’d think that the odds that one or the other would be the first to fertilize an egg would be about the same as a coin flip. And yet, for as long as people have been keeping records, nature shows a different, dependable pattern: For every 100 babies born biologically female, 105 come out biologically male. Scientists have speculated this mysteriously male-biased sex ratio is evolution’s way of evening things out, since females consistently outlive their XY-counterparts—for every man that reaches the age of 100, four women have also joined the Century Club.

This biological maxim has been so drilled into the heads of demographers—the researchers responsible for keeping tabs on how many people there are on the planet—that most don’t think twice before plugging it into any projections they’re making about how populations will change in the future. But a massive effort to catalog the sex ratios at birth, for the first time, for every country, shows that’s not such a smart strategy after all.

“For so long people just took that number for granted,” says Fengqing Chao, a public health researcher at the Institute of Policy Studies in Singapore. “But no one had ever gone to the trouble of pulling all this information together to get accurate estimates of this fundamental metric.” Chao led the five-year project, combing through decades of census data, national survey responses, and birth records to build models that could estimate national sex ratios across time. In doing so, she and her collaborators at the United Nations discovered that in most regions of the world, sex ratios diverge significantly from the historical norm. Across a dozen countries, the chasm amounts to 23.1 million missing female births since 1970. The results, published today in the Proceedings of the National Academy of Sciences, provide an unprecedented look at how societal values can skew the laws of nature.

“It’s an incredibly important contribution,” says Darrell Bricker, a Canadian political scientist. “If the only part of the population who can produce new kids are women under the age of 45, and a whole bunch of them are missing, it’s going to have an obvious impact on the fertility of a population.” In his recently published book, Empty Planet, Bricker proposes the radical idea that contrary to a population explosion apocalypse scenario, the data suggests the world is actually more likely to run out of people. If current models are mistakenly counting women that aren’t there, that only makes his predictions that much more plausible, he adds.

Not that off-kilter sex ratios are some huge secret. For the last 50 years, researchers and journalists have been tracking the phenomenon of plummeting numbers of female births, especially across large swaths of Asia. In Mara Hvistendahl’s 2011 book, Unnatural Selection, she documented how the rise of ultrasound technology and abortion, starting in the 1970s, empowered women in China and India to choose sons over daughters as part of routine reproductive decision-making in those strongly patriarchal societies. As a result, roughly 50 million excess males under the age of 20 today reside in those two countries. And at least in China, that wave has not yet crested.

According to Chao’s research, the height of sex-ratio inflation in China peaked in 2005, at about 118 male to 100 female births. That generation of boys is just reaching adulthood now. “It’s going to be a couple generations before this corrects completely,” says Therese Hesketh, a global health researcher at University College London. She studies China’s “Lost Generation” of men, mostly rural workers with no marriage prospects, who have resigned themselves to lives spent mostly drinking, smoking, and not having sex. Not being able to start a family is catastrophic in these traditional societies, she notes, and the toll is evident in rising rates of depression in China’s never-married men. Even after China imposed a ban on sex-selective abortions in 2004 and lifted its one-child policy in 2015, it’s still not seeing the population rebound that government officials had hoped for, in part because there are just too few women. Heske hopes this will serve as a lesson to other nations. While China and India were responsible for the majority of missing female births, Chao’s research shows similar trends in parts of Eastern Europe, like Albania, Armenia, and Montenegro, as well as in the African nation of Tunisia.

“There’s always been an assumption that sex ratios are only a problem in Asia, but this shows clearly it’s more widespread,” according to Heske. That’s the bad news. The good news is that everywhere, things seem to be trending in the right direction. If you look at South Korea for example, in 1990 boys were being born at the rate of 115 for every 100 girls. Nearly three decades later, after a period of intense social backlash, the ratio has converged back to baseline levels. Other countries with a history of inflated sex ratios are also on trajectories to return to normal, though at a slower pace than the Korean republic.

“Attitudes have really swung a lot, even in China,” says Hesketh. “Now it’s culturally unacceptable to even talk about sex-selective abortions, and having a daughter is seen as a really positive thing.” It may take decades for countries like China to get back within the biologically normal range of 102 to 107 male to 100 female births, but demography researchers won’t have to wait that long to plug in more accurate estimates. They can start using them today.

GizmoCrazed - April 9, 2014 1
How many of you are tired of having to spend hours on recharging your smartphone devices each time they run out of juice? I...