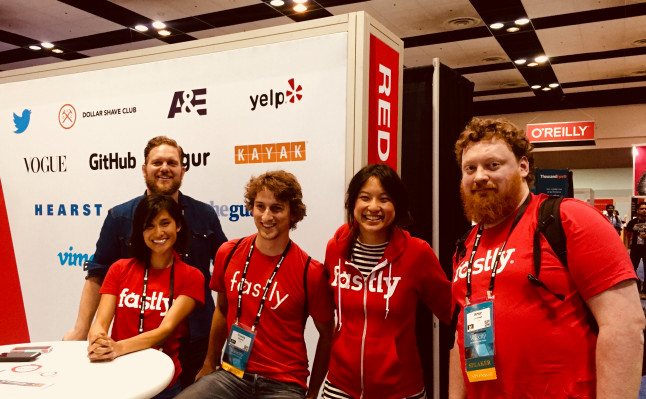 Fastly, the content delivery network that’s raised $219 million in financing from investors (according to Crunchbase), is ready for its close up in the public markets.

The eight-year-old company is one of several businesses that improve the download time and delivery of different websites to internet browsers and it has just filed for an IPO.

Media companies like The New York Times use Fastly to cache their homepages, media and articles on Fastly’s servers so that when somebody wants to browse the Times online, Fastly’s servers can send it directly to the browser. In some cases, Fastly serves up to 90 percent of browser requests.

E-commerce companies like Stripe and Ticketmaster are also big users of the service. They appreciate Fastly because its network of servers enable faster load times — sometimes as quickly as 20 or 30 milliseconds, according to the company.

The company raised its last round of financing roughly nine months ago, a $40 million investment that Fastly said would be the last before a public offering.

True to its word, the company is hoping public markets have the appetite to feast on yet another “unicorn” business.

While Fastly lacks the sizzle of companies like Zoom, Pinterest or Lyft, its technology enables a huge portion of the activities in which consumers engage online, and it could be a bellwether for competitors like Cloudflare, which recently raised $150 million and was also exploring a public listing.

The company’s public filing has a placeholder amount of $100 million, but given the amount of funding the company has received, it’s far more likely to seek closer to $1 billion when it finally prices its shares.

Fastly reported revenue of roughly $145 million in 2018, compared to $105 million in 2017, and its losses declined year on year to $29 million, down from $31 million in the year-ago period. So its losses are shrinking, its revenue is growing (albeit slowly) and its cost of revenues are rising from $46 million to around $65 million over the same period.

That’s not a great number for the company, but it’s offset by the amount of money that the company’s getting from its customers. Fastly breaks out that number in its dollar-based net expansion rate figure, which grew 132 percent in 2018.

It’s an encouraging number, but as the company notes in its prospectus, it’s got an increasing number of challenges from new and legacy vendors in the content delivery network space.

The market for cloud computing platforms, particularly enterprise-grade products, “is highly fragmented, competitive and constantly evolving,” the company said in its prospectus. “With the introduction of new technologies and market entrants, we expect that the competitive environment in which we compete will remain intense going forward. Legacy CDNs, such as Akamai, Limelight, EdgeCast (part of Verizon Digital Media), Level3, and Imperva, and small business-focused CDNs, such as Cloudflare, InStart, StackPath, and Section.io, offer products that compete with ours. We also compete with cloud providers who are starting to offer compute functionality at the edge like Amazon’s CloudFront, AWS Lambda, and Google Cloud Platform.”