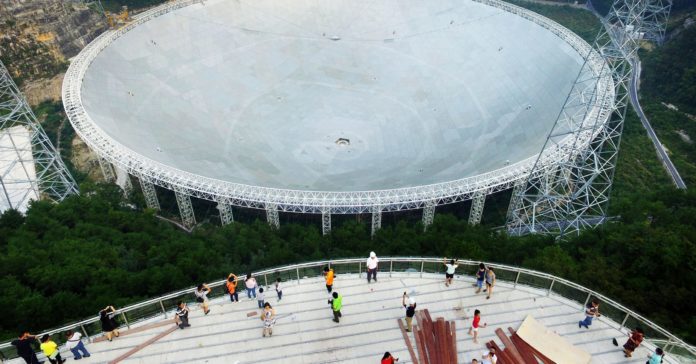 If a giant telescope observes the universe, and no one around can take a picture of it, does it really exist?

The Five-hundred-meter Aperture Spherical Radio Telescope—located in Guizhou, China—will have to find out. New regulations, put into effect in early April, ban (among other things) cell phones, smart wearables, drones, and digital cameras within 5 kilometers of the dish and impose uncomfortably large fines on those who break the rules.

Officials ratified the restrictions because tourists flocked to the once-remote area after the government built science-centric attractions nearby and promoted the telescope as a vacation destination. But with tourists come electronics, and electronics emit radio waves. Those earthly waves can easily shout down the whispers from the cosmos.

As WIRED reported in August 2018, the planned surge in visitors compromised the telescope’s data. With the new, stricter regulations, China has both acknowledged the potential problems and taken steps to resolve them.

Named FAST but nicknamed Sky Eye, China’s Eye, Eye of Heaven, and China’s Eye of Heaven, the telescope is so big it would take you about 20 minutes to circumnavigate it. That size makes it ultrasensitive to the radio waves that rain down from space—from black holes like the one that just got its first portrait, from remnants of exploded stars, from the chill gas where stars form, from the pulsars left when they die.

It makes sense that people would want to get a piece of that. So, in a way, it makes sense that not far from the facility, the local government built what some call Astronomy Town: a brand-new, ground-up city with a FAST movie theater, a FAST museum, hotels, restaurants, and roads where no one needed roads before. The government hoped to lure hundreds of thousands of residents and tons of tourists to the historically poor province. But it was unclear whether that development could mesh with FAST’s need for quiet.

Scientists and officials had, since the beginning, taken steps to mitigate the visitor-induced interference, but the new rules dig more at the root of the problem. As state-run news agency Xinhua put it, “A regulation in 2013 did not include details on how to prevent human activities from interfering with the operation of the giant dish. The new regulation is more specific on the management of visitors, delineates responsibilities for regulators, orders warning signposts to be established and requires local authorities to engage the public in maintaining an interference-free environment.”

Now, within 5 kilometers of the scope, there’s a blanket electronics ban, and violations can result in fines up to 30,000 yuan, or around $4,500. Beyond that—in a doughnut ring about 5 to 10 kilometers out—regulations ease slightly. And beyond that, from 10 to 30 kilometers in the distance, a peripheral zone has the loosest controls, which presumably mostly affect those who, like cell providers, would like to broadly broadcast signals. The maximum monetary penalty for producing harmful interference has gone up from 5,000 yuan (around $750) to 200,000 yuan (around $30,000), according to Xinhua and China Daily. China Daily also reported that “the three counties closest to the FAST site have all adjusted their economic and social development plans” and that “Guizhou also scrapped a planned airport in Luodian county out of concern for possible electromagnetic interference.”

In early April, says from the Pingtang County government website, officials held meetings with local residents and workers to “internalize the sense of responsibility and responsibility of protecting the [telescope].” The rules and outreach efforts come just after the announcement of a new television show about FAST, which state-run Zhongxin reported in late February.

FAST is not the only telescope around which governments clip human behavior and possessions. Near the Green Bank Telescope and an NSA listening post in the Appalachian Mountains, the US instituted a 13,000 square-mile radio-quiet zone. The Square Kilometre Array—a future telescope split between South Africa and Australia—will live in regulated zones on both continents.

Unless you want to go to the far side of the Moon to build your telescope (and plenty of people do), a protected region of Earth is the best you can do. Enforceable laws keep pockets of Earth quiet for now and prevent future technology from intruding and crowding out information from the cosmos—information like what is up with pulsars. These are fast-spinning, ultra-dense remnants of once-large stars that went supernova. And they’re FAST’s current specialty, as a recent issue of Science China Physics, Mechanics & Astronomy makes clear. A ban on visitor pictures seems like a good trade for the telescope’s continued ability to see pulsars and, you know, the rest of the universe.