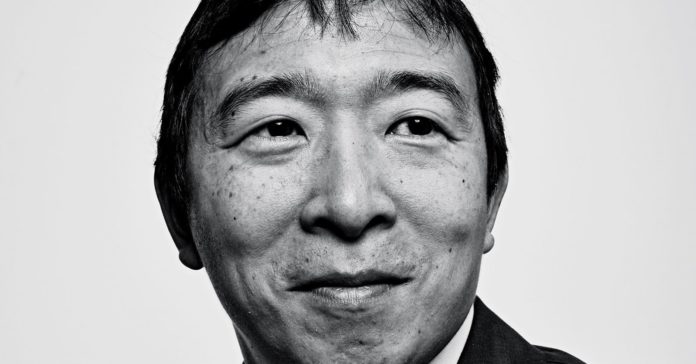 It’s probably fair to say that in the history of politicking, few politicians have publicly declared what to do about America’s crumbling malls, or how to provide free marriage counseling for all, or how to make filing taxes fun. But Andrew Yang, who’s gunning to be the Democratic presidential candidate in 2020, certainly has—and those are the more minor concerns among a dizzying list of 80 policy positions on his campaign website.

It’s an indication that Yang is running a rather methodical, data-driven, science-happy campaign. He’s applying that approach to more standard-issue problems like labor, climate change, and the economy but giving them a decidedly tech-forward approach: how (and why) we should define robots, what use might geoengineering have in saving the planet, and whether the government should embrace universal basic income and give every American a $1,000 check.

Yang talked with WIRED about all this and more in a recent interview.

(The conversation below has been condensed and edited for clarity.)

Matt Simon: You’ve been talking a lot about automation. We’ve had waves of automation before, but now with robots and AI, things seem different. Why wouldn’t it be a transition like we saw in the mass mechanization of agriculture, where people shifted into other jobs?

Andrew Yang: Four million manufacturing workers lost their jobs over the last number of years. According to economic theory and the precedent you just referred to, then these 4 million workers would get retrained, reskilled, and relocated and find new jobs in another industry. In reality, nearly half of them left the workforce and never worked again, and of that group nearly half filed for disability. It’s very lazy to say, “Hey, decades ago something happened to farming workers, so magic will ensue this time.” You can very clearly see the magic was not there for the manufacturing workers; the magic will not be there for the retail workers or the call center workers.

MS: There’s this fallacy that if you’re a truck driver and you get displaced by self-driving trucks, folks will say, “Oh, we’ll just teach you how to code!” I think that’s presumptuous and insulting.

AY: That’s exactly right. Why would we even think we can retrain coal miners and truck drivers to become software engineers? The only reason we think that is we’ve been brainwashed to equate economic value and human value, where if workers have lost their value in the marketplace then we think, OK, we have to transform you into something that does have value even if that transformation is totally unrealistic.

MS: So what about a robot tax? You replace a job with a robot, you get taxed, and we use that money for retraining.

AY: I’m a fan of some kind of transfer of value from the people that are in a position to benefit greatly from new innovations to help cushion the blow for people who are going to be displaced. And so a localized robot tax, as they’re considering in San Francisco, may make a lot of sense.

I will say that in a lot of contexts, it’s hard to figure out what’s a robot. And so the example is if CVS replaces a cashier with an iPad, are you going to tax them on that? And are retailers in a position to be able to pay those taxes? And what’s the appropriate level of taxes you’re using as a baseline? The whole thing actually gets very difficult when you try to apply it economy-wide.

It’s one reason why I’m proposing a value-added tax, which would end up serving many of the same goals. If you look at a company like Amazon, which is obviously going to be one of the biggest winners from artificial intelligence, it paid zero in federal taxes last year. We need to get some of the gains that Amazon’s harvesting. You could go around trying to tax the robots in Amazon’s fulfillment centers, but it would be much more efficient and harder for them to gain if we just passed a value-added tax, which would give the people a tiny sliver of every Amazon sale, every Google search, every robot truck mile.

MS: The problem of defining a robot is a very base problem even among roboticists. They can’t agree on what a robot is. And another argument is that this would stymie innovation if you put a tax on robots.

AY: That’s one reason a value-added tax is a more effective way to go. If you single out robots, specifically you end up having to impose a higher tax level in order to pay for meaningful retraining, if retraining works. My plan is to just give everyone $1,000 a month, and then have the economy geared more to serve human goals and needs. The retraining path fails right now, because one, we’re terrible at it. But two, it fails over time spectacularly because even if I succeed in some miraculous way in turning a truck driver into a software engineer, 15 years from now AI is going to be able to do that coding anyway.

AY: Part of it too is it’s totally the case that in many situations you can automate away half of a person’s tasks. The issue though is that in many of these organizations you literally have 100 people doing that task. If you can automate away half those tasks, then you say, hey, maybe we only need 50 of you. So that’s going to happen in many different contexts throughout the economy. We have to start facing facts where businesses are designed not to employ lots of people. Business are designed to try to get the most done as efficiently as possible using given resources. And in many cases having a human as part of the process is not what you’d be doing if you were just designing for capital efficiency.

MS: Is this perhaps an opportunity to rein in the excesses of capitalism? Are AI and robotics ways to really start looking more seriously at how we are dividing wealth in this nation?

AY: That is the only silver lining here, is that as AI and automation take off, it should push us to dramatically reconsider what our economy is for, what we value. Whether we truly think mothers and caregivers deserve zero, and many other fundamental questions that we’ve let languish for decades. So many of these things we should have been trying to address earlier. But here we are, it’s 2019, AI is about to take off, and are we really going to just keep on doing the same thing and assume the rules of the economy are going to be the same as they were in the ’70s? To me that’s ridiculous, that’s a stupid approach we need to evolve and advance as fast as possible.

MS: So how does a universal basic income fit into this? How you would implement a UBI, and where would that money come from?

AY: The plan is to give everyone $1,000 a month starting at age 18, $12,000 a year, and what this would do is create 2-million-plus new jobs in the economy. Because of all the spending power that people would have, it would make children stronger and healthier, it would improve mental health, it would decrease stress levels, it would create hundreds of thousands of new entrepreneurs and creatives, and it would enable millions of Americans to more effectively transition from one occupation or industry or neighborhood to another. And this is the kind of big move we need to make in order to help keep our society strong through one of the greatest economic and technological transformations in our history.

MS: Would you point to any UBI pilot programs that would back up with solid data that this is a good idea and in fact a necessary idea?

AY: The best data we have is that one state has had a dividend for 37 years: Everyone in Alaska gets between $1,000 and $2,000 a year, no questions asked. And it’s wildly popular. It has created thousands of jobs, improved children’s health, has decreased income inequality, and has stood the test of time through many, many different governors and administrators because everyone loves it. You don’t need to look very far to even another country to find an incredibly successful example of the dividend in action.

MS: Switching gears to climate change. You actually have a section of your website about geoengineering, approaches like spraying aerosols in the atmosphere to cool the Earth. Geoengineering researchers are saying please, please, please, this needs governance. We can’t just let a rogue country go off and spray aerosols, because it might affect the weather of its neighbors.

AY: The best way to get international understanding is to get the United States to find leadership in this, which would mean putting some resources to work, galvanizing the scientific community. Saying look, we should bring other countries to the table and come to some sort of agreement that no one country is going to start geoengineering without some sort of greater framework in place. But we don’t have that much time, because there are some countries that are literally slipping under the waves. And one of the things I’ve said is we probably have 20 years before China just starts doing this unilaterally—they’re the type just to do it. So we need to provide leadership in this direction as fast as possible.

MS: What about the moral hazard here? That if we do something as drastic as geoengineering, people will think, well, we’re in the clear, now we can keep emitting as we have.*

How Wikipedia Chose the Image for the ‘Human’ Entry

The Lily drone is back in perhaps the saddest rebirth in...