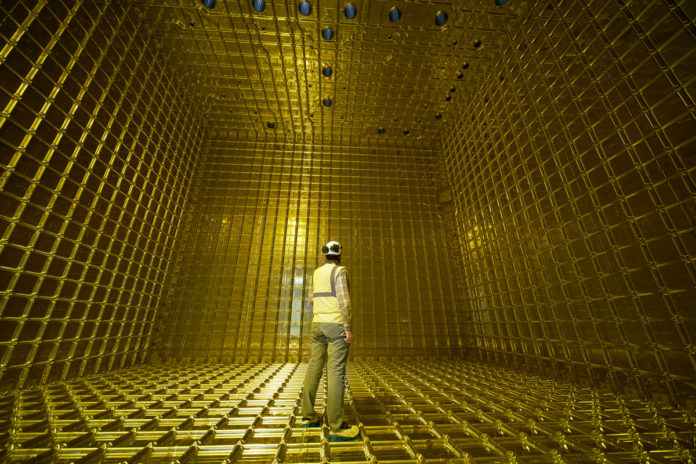 Seventy-thousand tons of liquid argon, trillions of particles moving at nearly the speed of light, an abandoned mine-turned-lab a mile underground, over 1,000 scientists and more than a billion dollars — all to catch what optimistic calculations suggest will be a single particle each day.

It’s a staggering amount of effort, but a search for some of the most elusive particles in the universe may just be worth it.

The objects in question are neutrinos, often called ghost particles. They’re far more present than the nickname suggests, though. Trillions pass through you every second — you just never notice. They’re so lightweight, their odds of interacting with other particles are enormously slim; it takes extraordinarily sensitive equipment to even detect them.

But that evasiveness makes neutrinos a tempting quarry for physicists.

“There are more neutrinos in the universe than there are protons or neutrons, or anything like that, by a factor of about a billion,” says Deborah Harris, a physicist who studies neutrinos at Fermilab, just west of Chicago. “If your goal as a field is to understand the universe, you need to understand neutrinos.”

To that end, Fermilab, along with the Sanford Underground Research Facility in South Dakota, is starting a new project called the Deep Underground Neutrino Experiment, or DUNE. The goal is to track and study the shadowy particles like never before.

Currently set to begin in 2026, the experiment will be an important step forward for researchers studying neutrinos. It starts with a new particle accelerator, still in development at Fermilab. The complex machines are a crucial tool for physicists studying the universe’s smallest bits of matter, allowing them to examine the particles in a controlled environment. Inside, a series of electromagnetic fields will accelerate individual protons up to nearly the speed of light. Then, still underneath Fermilab’s grounds, the protons will ram into a block of graphite, producing a shower of particles. As these particles decay, a stream of neutrinos is produced. A sensor will gather data on that stream before it shoots off, traveling through Earth’s crust, toward South Dakota, 800 miles away.

There, buried deep underground at the defunct Homestake Mine, will be four warehouse-sized tanks filled with supercooled liquid argon. The hope is that some of the neutrinos made at Fermilab will strike the nucleus of an argon atom, releasing a burst of light and a cascade of electrons that scientists can track.

GizmoCrazed - January 21, 2013 0
Clouds can form pretty fascinating shapes and objects and most of us can attest to this scenario: spotting clouds of odd and unique shapes...

Is This The Samsung Galaxy S III? [LEAKED IMAGE]

Space Photos of the Week: Dead Stars and a Cute L’il...