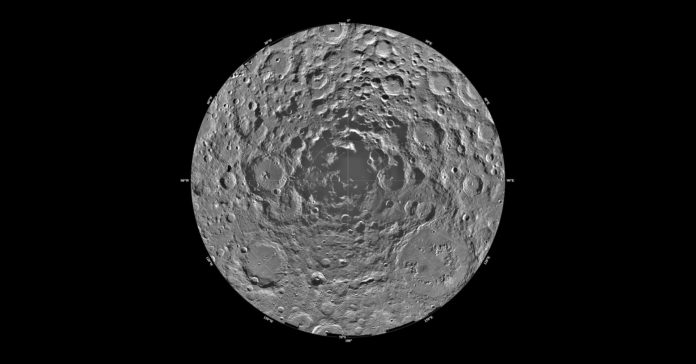 In December 2017, roughly a year into his tenure as president, Donald Trump directed NASA to develop a plan to return American astronauts to the moon. Since then, the government has released few details about what this mission would look like. But Tuesday, at the fifth meeting of the National Space Council, Vice President Mike Pence doled out a big piece of information: When American astronauts go back to the moon, they will land at the lunar south pole. Why there? Because there’s ice at the moon’s poles, which Pence claimed could be turned into rocket fuel.

“In this century, we’re going back to the moon with new ambitions,” Pence said. “Not just to travel there, but also to mine oxygen from lunar rocks that will refuel our ships, to use nuclear power to extract water from the permanently shadowed craters of the south pole, and to fly on a new generation of spacecraft that will enable us to reach Mars in months, not years.”

Up until a decade ago, planetary scientists were fairly certain no water existed on the moon because it has no substantial atmosphere. Over the past 10 years, however, analysis of data collected by the Indian Space Research Organization’s Chandrayaan-1 lunar orbiter “definitively” proved ice exists on the moon. Most of the ice the Chandrayaan-1 detected is located in craters at the south pole, which is permanently shadowed due to the moon’s slight axial tilt. Temperatures never rise above –250 degrees Fahrenheit in these craters, preventing the ice from evaporating into space.

As NASA administrator Jim Bridenstine pointed out at the National Space Council meeting, NASA scientists have estimated that there may be upwards of 1 trillion pounds of ice at the lunar poles based on data from Chandrayaan-1. This, Bridenstine said, “means life support, air to breathe, water to drink, [and] hydrogen and oxygen, which is rocket propulsion on the surface of the moon.”

Both Pence and Bridenstine spoke as though we already have the technology to mine this lunar ice for life support and rocket fuel, but scientists say there is a lot of work to be done before this will be possible.

The first major hurdle NASA needs to overcome? Finish the Space Launch System (SLS), the agency’s massive next-generation rocket that has been plagued by delays and budget problems since work began on it a decade ago. The SLS was scheduled to send a test mission of an uncrewed Orion capsule around the moon in 2020, but earlier this month the agency announced that this likely wouldn’t happen until 2021. Delays beget delays, pushing the first crewed mission to the lunar surface to 2028, a target date Pence said was “not good enough” at the National Space Council meeting, where he called for a 2024 mission.

Even if NASA speeds up SLS development to hit the Trump administration’s aggressive 2024 target date for a crewed mission, landing at the south pole adds an extra layer of difficulty to the mission. “The south pole is a great place to send humans and we definitely need to send them there,” says Ryan Watkins, a research scientist at the Planetary Science Institute who has researched lunar landing sites. “There’s just more to it than other landing sites.” The orientation of the lunar south pole can create communication problems between astronauts on the moon and mission control on Earth, Watkins says. The lunar south pole also has a more rugged terrain compared to the moon’s equatorial region, which is where the Apollo 11 astronauts landed in 1969.

“In my opinion, it would be best to maybe send humans somewhere else [on the moon] and test how to extract these resources, and then on the next mission, send them to the south pole” Watkins says.

Then there’s a matter of the technological abilities to extract and convert lunar ice. Jack Burns, an astrophysicist at the University of Colorado who served on NASA’s presidential transition team, pointed out during Tuesday’s Space Council meeting how little we know about lunar water, to say nothing of how to turn it into rocket fuel on the moon.

“Before we put boots on the ground at the poles, we urgently need a robotic water ice prospecting mission to the lunar poles,” Burns said. “We don’t understand what the water ice looks like below the surface. Is it mixed mixed finely with the lunar regolith or is it blocks of ice? Both are theoretically possible, but it would require very different techniques to extract.”

The Trump administration’s plan to send astronauts to the lunar south pole is certainly bold, but before we make the “next giant leap” it might be a good idea to figure out what we’re going to do once we get there.

The First Look at Sony’s A33 and A55 Pellix DSLRs