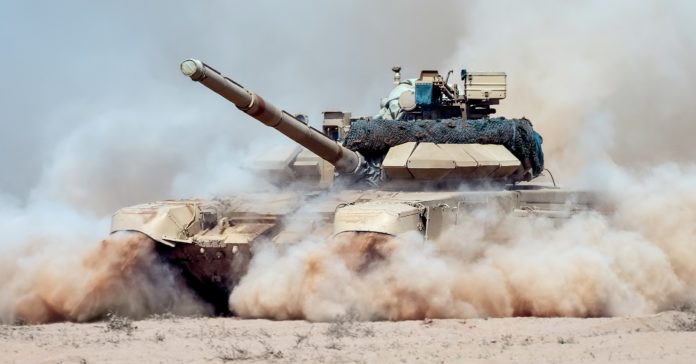 If the internet was your online physics textbook, The Slow Mo Guys would be writing a good number of those homework questions. Of course The Slow Mo Guys are Gavin and Dan and they use a super high speed camera and look at stuff around us. OK—in this case, they aren’t looking at normal things. They are looking at the motion of a high speed shell fired from a tank.

But how do you see this tank shell if it is traveling around 2,000 feet per second (609 m/s)? You could just put the camera far enough away that the path of the projectile would be in the frame. However, in that case you could barely see the fast moving object. It would be too small in the video. OK, what about getting close to the path so that the shell looks larger? Yes, you could see it, but just for a tiny fraction of the total path.

The solution to this problem is to use both methods. Get the camera close to the path and then rotate the view as the projectile passes. The Slow Mo Guys are going to put the camera 82 feet from the path which means it would have to rotate at around 3,000 degrees per second—which is pretty much impossible. But instead of rotating a camera, they will just use a rotating mirror. The camera looks at the mirror and from that it can see the tank shell. Then the camera can stay in place while the mirror rotates. Perfect.

Here is the real question. How do you determine the angular position of a mirror so that it can track the projectile? The answer: polar coordinates. Yes, you thought they were just joking when they made you do stuff with polar coordinates in math class. Surprise. You actually need this sometimes.

This is the one you are likely familiar with. In two dimensions, there is an x-axis and a y-axis. They are perpendicular to each other. Once you pick the origin, you can describe the location of an object with an x and y coordinates.

There’s really not too much to say about this coordinate system since you’ve probably seen it before. Let me just make some comments. Don’t forget about units. It’s not just x and y numbers, these numbers have to have units to make a connection to the real world.

Now let’s say that the projectile is moving in the negative x-direction with a velocity of 600 m/s. In that case, I can write the following kinematic equations for the position of the projectile.

In these expressions, x1 is the starting x-position and x2 is the position after some time Δt. Notice that the y-position doesn’t change since it’s only moving in the x-direction.

But just because it’s easy to find the position doesn’t mean you would know where to point your camera mirror. OK, I get it. It’s possible to use the position to calculate the angle to aim the mirror—but that’s not as much fun as using polar coordinates.

Oh, I should also point out that if you move the origin of the cartesian coordinate system it’s not a big deal. Sure, you will have different starting positions but the velocity equations mostly look the same.

If you are still dealing with motion on a flat plane (ignoring the vertical motion of the tank shell), you will need two coordinates to describe the location of the object relative to the origin. Instead of using two perpendicular distances (x and y), polar coordinates uses an angle and a distance. Here is the same object from before using polar coordinates.

Instead of x and y, we use r (the distance from the original) and θ the angle from the x-axis. Yes, if you draw the polar coordinates on top of the cartesian coordinates it’s possible to see the connection between the two systems. If you want to find the r and θ values you can use a right triangle. The hypotenuse of this triangle would be r and the angle would be θ. This gives the following conversion.

OK, let’s just do this. Let’s get an expression for the velocity in polar coordinates. Since it involves a lot of math, I’m just going to share this video of my derivation instead of writing it out. Actually, I wrote it out too—here you go.

But in the end, you don’t get something nice and simple like you do in cartesian coordinates. You get an r and θ expression that changes with time and depends on second derivatives with respect to time. Yes, you get a differential equation. But wait! All is not lost. I know you don’t want to solve a differential equation—and you don’t have to. We can create a solution to this problem by breaking it into tiny steps and solving each step. This is the key idea in a numerical calculation. It’s easiest to do something like with a small bit of computer code.

In order to create a numerical calculation, I need the following (in polar coordinates).

That should be enough. With these values, I can use the differential equations to find the polar velocity and position after some short time interval. Then I just keep doing that until I want to stop or my computer explodes. Here is the code with a plot of the angular value of the position as a function of time. Feel free to edit it and rerun it. You can’t break anything.

From the plot of angle vs. time, you can see it’s not such a simple problem. You can’t just turn the camera mirror at a particular angular speed to follow the projectile. The closer the tank shell gets to the camera, the faster you have to rotate the mirror for it to stay in view.

OK, now for some questions for you (or for me in the future).

The BBC will run its first podcast ads, powered by Acast

GizmoCrazed - May 2, 2018 0
The BBC will start running ads in its podcasts, thanks to a partnership with podcast publishing and monetization company Acast. Acast CEO Ross Adams told...