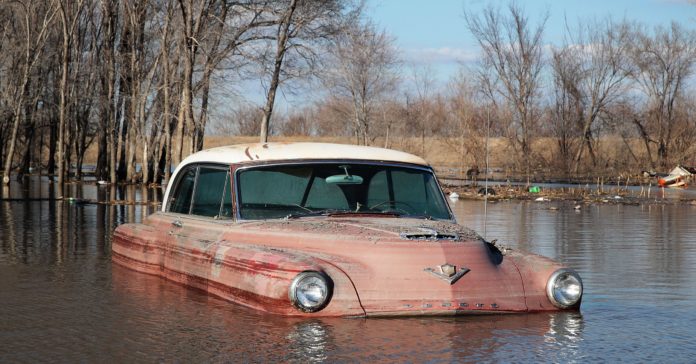 The record-setting floods deluging the Midwest are about to get a lot worse. Fueled by rapidly melting snowpack and a forecast of more rainstorms in the next few weeks, federal officials warn that 200 million people in 25 states face a risk through May. Floodwaters coursing through Nebraska have already forced tens of thousands of people to flee and have caused $1.3 billion in damage.

The National Oceanic and Atmospheric Administration issued its spring flood outlook Thursday, predicting that two-thirds of the country is at risk of “major to moderate flooding,” from Fargo, North Dakota, on the Red River of the North down to Nashville, Tennessee, on the Cumberland River. The floods from the past two weeks have compromised 200 miles of levees in Nebraska, Iowa, Missouri, and Kansas, according to the US Army Corps of Engineers.

The rains and floods are expected to continue through May and become more dire, according to Ed Clark, director of NOAA’s National Water Center in Tuscaloosa, Alabama. “This is shaping up to be a potentially unprecedented flood season,” Clark said, “with more than 200 million people at risk for flooding in their communities.”

A combination of heavy snowfall in late February, tropical rains and wet snow from the “bomb cyclone” that swept across the country a week ago, and frozen or saturated ground surfaces have set the stage for the floods. Ice jams on top of frozen waterways are adding to the problem by diverting floodwaters out of river channels and sending them onto land. “It’s not looking like we are going to see any dry stretches anytime soon,” says Thomas Graziano, director of the water prediction center at the National Weather Service.

Officials say the entire Mississippi River basin has received three times as much rainfall as in a normal year.

And it’s not done falling yet. More rainstorms are expected to hit the Midwest over the next eight to 10 days. That precipitation will be “like water running over concrete,” Graziano says. He expects this year’s flood levels to top the disastrous floods that hit the Missouri River in May 2011 and the Red River in North Dakota and Minnesota in 2009.

This winter’s big snowpack is fueling the floods. In the eastern Dakotas and Minnesota, more than 20 inches of snow remains on the ground. The Missouri, Ohio, and Mississippi Rivers drain the central United States, but it takes several weeks for the water to travel downstream. In the meantime, emergency officials are warning local residents to make evacuation plans as well as purchase flood insurance in certain areas.

Climate scientists say it’s too early to tell exactly to what degree human-induced climate change has affected this spring flood cycle, but they note that the watery disaster is following a pattern of extreme weather events across the United States. There’s about 10 percent more moisture available in the environment as a result of global climate change, says Kevin Trenberth, a senior scientist at the National Center for Atmospheric Research in Boulder, Colorado.

Under the right conditions, that extra moisture can be amplified into 30 percent more rainfall during an extreme weather event such as a hurricane, bomb cyclone, or the series of storms that has hit the Midwest, Trenberth explains.

GizmoCrazed - November 19, 2018 0
The general rule when developing a new kind of solar technology is to expect progress to be slow. Take silicon solar cells, the most...