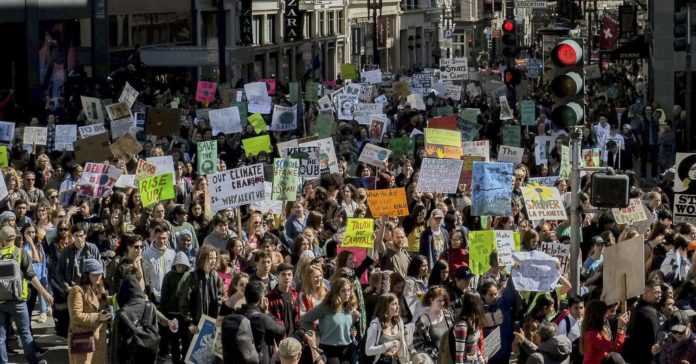 On March 15, young people around the world walked out of school and into the streets. From San Francisco to South Africa, an estimated 1.4 million students raised their collective voices to bring awareness to the urgency of climate change.

It was the largest ever global action against the harms of climate change, and it was pulled off entirely by children. A teenager named Greta Thunberg inspired the strike, and kids across the globe heeded her call, organizing strikes in their hometowns and hitting the pavement. Adults came out in support, but they were there to listen, not lead. The message of the global climate strikes were clear: The youth will have to live on a climate-ravaged Earth, and so it is their voices that must be heard.

In that spirit, WIRED hired two teenage photographers to cover the climate strikes in the US from their perspective: In Atlanta, 17-year-old Henry W. Grady High School senior Esme Bella Rice photographed the strike in front of the Georgia State Capitol building; and in San Francisco, 18-year-old Max Buenviaje-Boyd. a senior at Ruth Asawa School of the Arts, photographed the large march from the Federal Building at Civic Center through downtown to Union Square.

Buenviaje-Boyd, a San Francisco native, has been to plenty of protests. “But what was really different about this one was that it was completely student-led and student-organized. There was this pride that we can do this by ourselves if we have to,” he says of the feeling at the march. “And when it comes to climate issues, we will have to do this by ourselves. This is our future.”

Even as he clambered up scaffolding and talked his way onto a tourist bus to get shots of the SF crowd, Buenviaje-Boyd says he couldn’t stop smiling. “People were coming up from [Senator] Dianne Feinstein’s office toward Union Square, and I just asked one of those double-decker drivers if I could get on his bus, and he was kind enough to let me.” That size of the march surpassed the expectations he and his friend Nadja Goldberg, who planned the event, had in their wildest imaginations. The images Buenviaje-Boyd captured show how the 1,000 or more students easily took over Market Street downtown.

The turnout in Atlanta, by contrast, was much smaller. Local student photographer Rice estimates that it included some 70 to 80 people. But they were equally passionate. “It’s so empowering to see young people actually take responsibility to gather and do something,” she says. Organizers gave speeches via megaphones and passed out sheets of chants to the crowd, who yelled in unison loudly enough for passing cars to hear.

“There’s such a stigma around teens, that everyone just does stuff for attention or to be cool,” according to Rice. “But they were there not to just brag about being at a protest and skipping school. They were there with a purpose and you could really see that.”

The photos Buenviaje-Boyd and Rice took document their generation showing up, standing up, and facing the future with purpose.

CHIP – The World’s First $9 Computer That Can Do Almost...