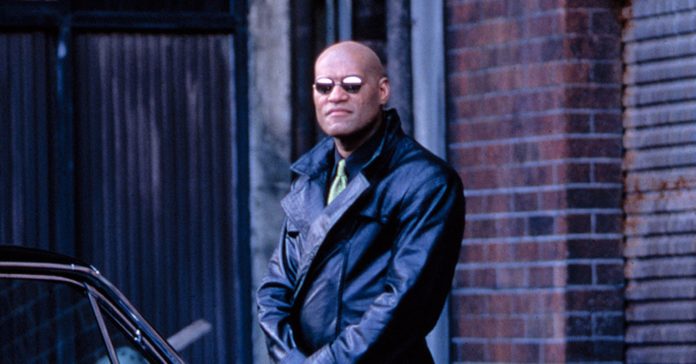 Wait. You haven’t seen The Matrix? It’s a modern sci-fi classic and now it’s also 20 years old. Well, you should watch it. Here’s the basic idea—some dude (Neo) finds out he’s been living in a computer program. Since his world isn’t “real,” he is able to do some superhuman things—like dodge bullets and jump from one building to the next.

Yes, this building jump is what I want to look at. It’s one of the first real tests for Neo as he learns to manipulate this computer world. The goal is to run and jump from the top of one very tall building to the next building. Morpheus starts off to show Neo how to do it and makes it easily. Neo crashes. Good thing it’s not real life.

Even though this is just a computer simulation, it’s still fun to consider how a human could make this jump. Let’s go over two possible methods to make this jump (in the Matrix).

A normal human couldn’t make that building-to-building jump in the real world. But what if you could run faster? How fast would you have to run to make that jump? Of course the first question: How far apart are the building? I’ll be honest. I spent quite a bit of time looking for these EXACT buildings in real life. I failed. However, it looks like it’s just two normal buildings across the street from each other. Based on my measurements from real buildings (on Google maps), I think 25 meters seems fair.

So, how fast do you have to run to make a jump this far? Assuming the air resistance is negligible, this becomes a standard physics projectile motion problem. Once Neo is in the air, the only force acting on him is the downward gravitational force. This means that his horizontal velocity is constant and his vertical acceleration is -9.8 m/s2 (we call this -g).

The horizontal and vertical motion can be treated as two separate kinematics problems to produce the following equations.

Although the horizontal and vertical motions are mostly independent, they still happen in the same amount of time (t). If I solve for the total time in one direction, I can use that in the other direction. That’s just what I’m going to do.

OK, so in this case I am going to assume the human (computer model of a human) is running really fast. At the edge of the building the human pushes up off the ground to initiate the jump. However, it’s just a normal human running fast. This means that the vertical jump is still a normal jump with a normal vertical height. Let’s say that the human can jump with a vertical height of 1 meter. This would give a hang time of 0.6 seconds. Yes, I know it seems longer than that but it’s not.

Now back to the horizontal motion. Neo has just 0.6 seconds to go all the way across from one building to the next. With a change in distance of 25 meters in just 0.6 seconds that means he must run with a speed of 41.7 meters per second (93 mph).

I told you it was really fast.

Yes, this is similar to the previous jumping method. However, in this case the human is going to have a launch speed in both the vertical and horizontal directions instead of just running fast. This means that Neo will be in the air for much longer than 0.6 seconds so that he won’t have to have as large of a horizontal velocity. But this also means that he is going to need a super human push on the ground to get him into the air.

This human jumps with an initial velocity of v0, but that means there is a component of velocity in the x-direction and the y-direction that depends on the launch angle. What angle is the best? Well, maybe it’s not the best but if you want the maximum horizontal range for that velocity then the angle should be 45 degrees. Why? I’ll just leave this older derivation here—but you need to be careful. A launch angle of 45 degrees is only the maximum range for cases that start and end at the same height (level ground). Also, this doesn’t work if there is air resistance on the projectile. You have been warned.

Since this case deals with “level ground” and no air resistance (because I said so), then I can easily find the launch velocity to travel a horizontal distance of x2 (assuming it starts at x = 0).

For a distance of 25 meters, Neo would have to jump at a 45 degree angle with a launch speed of 15.6 m/s (34.8 mph). That’s not humanly possible, but at least it’s a slower speed than just running.

The Matrix isn’t real. So why would anyone have to constrain themselves to real things? Instead of running fast or jumping fast, you could just change the gravitational field. The gravitational field is the force per unit mass on the surface of the Earth. We usually use the symbol “g” for this and it has a typical value of 9.8 Newtons per kilogram. But if you drop (or throw) an object, both the force (weight) and the acceleration depend on the mass of the object in the same way. This means that all falling objects have the same vertical acceleration of 9.8 meters per second squared (which is an equivalent unit to N/kg).

If you decrease this gravitational field, you should be able to jump farther. But what value should you use if you can change it? How about looking at the successful building jump by Morpheus? From the video, he takes about 4.2 seconds to complete the jump. If I assume he jumps like a normal human with an upward speed of 3 m/s (this would give a 0.6 second hang time), then the gravitational field would be 1.4 N/kg. Oh, this is about the same gravitational field as the surface of the moon (1.6 N/kg). Maybe that’s how Morpheus does it. He just pretends he is on the moon.

If you need some homework, how about you repeat these three calculations but include air resistance? That would be fun.

GizmoCrazed - December 23, 2018 0
Gamelearn, which develops video games to deliver corporate training, has scored $5 million in Series A funding. Participating in the new financing round is...